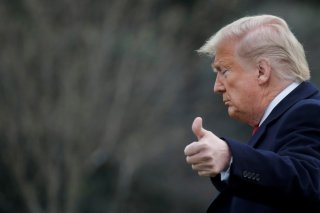 Observers are intensely debating whether the coronavirus is likely to deal greater damage to America’s standing in the world or to China’s. One might make four observations—the first two, evaluative; the third, speculative; and the fourth, in admittedly immediate contradiction, cautionary.

First, albeit for different reasons, neither country has acquitted itself especially well; historians of the pandemic may be more likely to weigh which one’s reputation suffered less than which one’s improved more. The Lowy Institute’s Michael Fullilove succinctly summarizes the prevailing judgment that “smaller, more agile countries” have contained the spread of the virus within their borders more effectively than “the superpowers.”

Second, while the pandemic is unfolding amid—and sadly reinforcing—the erosion of strategic distrust between the United States and China, it does not lend itself to sweeping narratives about the contest between liberalism and authoritarianism. As Rachel Kleinfeld, a senior fellow at the Carnegie Endowment for International Peace notes, both democracies and autocracies have mixed records thus far in slowing the transmission of the virus. In addition, she explains, our sample size is not yet sufficiently large to assess with much credibility the correlation between type of regime and efficacy of response: “The disease has not yet ravaged developing countries, making it impossible to include poorer autocracies and democracies in the comparison.” Pandemic postmortems will entail the further task of distinguishing how different varieties of democracies and autocracies responded. Surveying Asian powers that have won widespread plaudits for their responses to date—especially Taiwan and Singapore, but also Hong Kong, Japan, and South Korea—the Lee Kuan Yew School’s James Crabtree offers a more prosaic explanation: “The thread uniting the countries that did well was that…they were strong, technocratically capable states, largely unhampered by partisan divisions. Public health drove politics, rather than the other way around.”

Third, while both the United States and China are likely to emerge from this pandemic having incurred significant reputational damage, the former may experience greater relative damage, for it has failed to fulfill the expectations that most observers have of the world’s lone superpower—expectations that they may not have of its putative replacement. Most would not have expected the country that accounts for a fourth of the global economy and commands an unrivaled capacity for force projection to run out of personal protective equipment for its doctors and nurses so quickly after the virus broached its borders. Nor, considering how often it has mobilized collective action to address global crises over the past three-quarters of a century, would they have expected it to be as inward-looking and as at loggerheads with longstanding allies and international institutions.

The headline of Katrin Bennhold’s recent article—“‘Sadness’ and Disbelief from a World Missing American Leadership”—reflects a widespread belief that the United States should—and perhaps an underlying hope that it ultimately will—provide that necessity. It is difficult to imagine a comparable headline about China: while other countries will, of course, welcome assistance that it provides as the world struggles to overcome the pandemic, few expect it to lead that response, even as Beijing seeks to depict itself as upholding a fraying architecture of cooperation that Washington is undermining.

Shortly after stepping down as assistant secretary of state for democracy, human rights, and labor, Tom Malinowski observed that “in the refugee camps and war zones that I’ve visited, I’ve never met anyone who told me they were angry at China or France or Russia for failing to help them. Where people are desperate, it is still America they count on, whether they love or scorn it, and America they blame when aid does not come.” Fairly or not, then, the United States bears a unique burden: others’ hopes. The more severe a test the postwar order confronts, the more damage its reputation stands to suffer when its performance is incongruous with those expectations. Having taken close to three hundred thousand lives in just four and a half months, and threatening a global downturn more acute than the Great Depression, the coronavirus is about as dire a challenge as one can imagine.

Fourth, and finally, any and all predictions about a post-pandemic order should be made humbly and treated skeptically. The sobering likelihood is that we are only in the nascent stages of the pandemic; many observers believe that its human toll and economic costs are likely to continue growing rapidly until a vaccine is widely available. Narratives about America and China’s respective responses—domestic and global—are not fixed; they are likely to continue evolving over the coming months. Just consider how significantly storylines about China’s responses have changed. In mid-March it was common to read assessments that Beijing had swiftly contained the coronavirus in Wuhan and was playing a central role in facilitating the rest of the world’s recovery. In recent weeks, though, its standing has fallen considerably, with high-ranking government officials peddling conspiracy theories about the origins of the virus, demanding that recipients of its medical equipment express their gratitude publicly, and dismissing the growing number of reports of defects in the medical equipment China has provisioned.

The United States has defied many a declinist prognostication, and it may be able to do so again if it modernizes its social compact and commits itself anew to developing coalitions that can address present and future transnational emergencies. But it will likely have to work much harder than China to recover its pre-pandemic standing, assuming that the pervasive perception of an enfeebled and insular superpower has not already calcified.