Why the Coronavirus Reminds Us of the Lesson of SARS 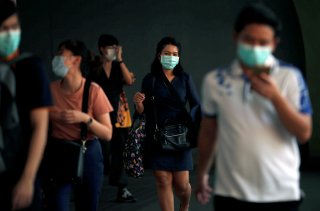 The spread of the coronavirus has sparked global panic, causing more than 350 deaths and over seventeen thousand infections globally. The origin of this tragedy is purportedly from consuming wild animals in local Chinese seafood markets, a tradition that has occurred for centuries. Since the epidemic broke out, the world media, and some of my friends, have blamed the penchant of Chinese people for eating rare and weird animals. “I believe that as the second-largest economy in the world, China does not lack food. Why don’t Chinese eat some meat more normal?” one of my non-Chinese friends complained to me.

Admittedly, tamed animals such as chicken, cows and pigs have been consumed by human beings for thousands of years and the corresponding meat is suitable and healthy for humans to digest. By comparison, based on the common sense of science, the consumption of meat from rare species may potentially bring unpredictable dangers to human health. Behind this phenomenon, I argue that there hides a more profound rationale. Although China has been globally acknowledged for its extraordinary economic growth and modernization in the last forty years, the minds of some Chinese people, to some extent, still fall behind its economic wonder and haven’t been fully modernized, prioritizing their adverse culture over basic science.

More than one hundred years ago, the May Fourth Movement, and the following New Culture Movement, advocated the significance of science and this spirit has lasted until now. Currently, the Chinese government, media and academy have constantly advised their citizens to accept and respect science. However, in the Chinese mind, it seems ancient tradition still plays a very important role. In history, eating wild animals has been considered as a symbol of wealth and luxury due to their scarcity and cost. Virologist Professor John Mackenzie at Curtin University has observed that “the problem in China is that if it has four feet, it’s edible, and the rarer and more expensive it is, the more brownie points for eating one. It's a difficult social problem for China to solve.” According to traditional medicine, Chinese people believe that eating unusual creatures may treat certain illnesses and even enhance male sexual potency. “This is just part of Chinese culture and they love to eat anything alive,” according to Yanzhong Huang, a senior fellow for global health at the Council on Foreign Relations.

It is understandable that the unique Chinese culture defines the identity of being Chinese, with pride for their glorious and abundant history. Facing the inevitable impact of modernization, some Chinese are even scared of the loss of their “Chineseness.” There is no doubt that the modernization originates from the West, but this does not mean being modernized will push Chinese people to become Westerners. If so, Chinese women may still suffer from foot-binding and Chinese men might still have their braids. In addition, Japan has been regarded as a totally westernized country, but has Japan lost its culture? In fact, Japan is world-known for its fascinating and multifaceted culture from karate to Geisha. From another perspective, ancient China was far more advanced than its European counterparts. Did the introduction of Chinese-created papermaking in Europe promote European to be any Chinese? Cardinally, modernization should not be distinguished between the West and the East. Instead, it should be regarded as an essence of human civilization that the world may share together.  As for some of the detrimental traditions that violate the wellbeing of humanity, they should be gradually eradicated rather than using so-called culture as a shield with which to defend their actions.

It is not the first time that China has suffered from the endless greedy consumption of wild animals. In 2003, the lesson of SARS still lingers. This time the Chinese people are again using their blood to pay the unbearable price, which no one wants to see regardless of any political discrepancy or economic competition. More importantly, nowadays the global landscape is transformed. There is no world future—sunlit or shadowed—in which China will not be around. Compared to SARS, the new endemic has spread more rapidly due to the increasing frequency and quantity of Chinese people traveling all over the world. In fact, the Chinese government also realizes that China is becoming incrementally connected to the world, proposing to build a community of shared future for mankind. As part of this community, we essentially represent the brand of Chinese ethnicity and culture. Pathetically, in some tourist destinations, warnings have now been written only in simplified Chinese to warn against our unmodernized demeanors, such as spitting on the street and cutting in line. Therefore, when some of us whine that the world does not like Chinese, we may need to reflect on our own behaviors first, rather than blaming “others”: are we modernized and qualified to be global citizens?

Yuan Jiang is a Chinese Ph.D. student currently studying at the Queensland University of Technology, Australia. He is affiliated with the QUT Digital Media Research Centre, currently focusing on the Belt and Road Initiative. He completed his Master’s Degree in political science at Moscow State Institute of International Relations as a Russian speaker and received a Bachelor’s degree of law from Shanghai University. He served as an Account Manager of ZTE Corporation and a special correspondent in Asia Weekly and The Paper/Pengpai News, both in Moscow. He tweets at @jiangyuan528.