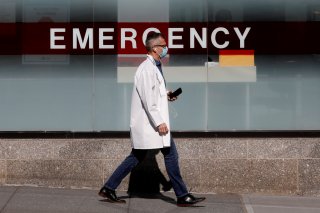 So, this gets back to your original question. Where are we eighteen months from now? Does this virus come back? Certainly, SARS or MERS, which were two previously novel coronaviruses, didn’t, but this is clearly a different virus. It’s clearly better adapted to growth and reproduction in the human population, so it may come back. We’ll see.

Heilbrunn: Are you worried about a recurrence of the virus in the fall? Or do you think that we will be in better shape by May? And will we have a better grasp on COVID-19 with more testing.

Offit: What you’re looking at now in terms of today’s number of cases—today is April 2 and you are looking at around 5,100 deaths so far—this is the effect of where we were three weeks ago. The virus’ incubation period is five to ten days, and then you get sick, maybe get sicker, then go to the hospital, maybe get intubated, and maybe you die. That takes about three weeks. So we are looking at what we did as a country three weeks ago. I think we are getting better at shutting down. Florida has just had a shutdown. There are a number of states that were hesitant to do that which are now shutting down. There would have been value for President Trump to have called for a nation-wide shutdown much earlier because I think we would be far more ahead of the game than we are now. What you are seeing now is more of an understanding that we have to shutdown to stop the spread. We will see the effect of that three weeks from now. By the end of April, I predict, we will start to see the falloff of this logarithmic, exponential growth curve.

Heilbrunn: What does all this imply for Americans’ attitudes towards vaccines? You had written a book called Autism’s False Prophets and about the suspicion of vaccines in America. What’s your take now?

Offit: I think vaccines are the hero of this story. It’s interesting that the most downloaded movie right now is Contagion, where vaccines were also the hero of that movie. People couldn’t wait to get the vaccine. People were lining up to get the vaccine. We want there to be a vaccine—and there is no reason to believe that we could not make a successful vaccine, I’m just questioning the timeline because you do want to make sure that it is as safe as it can be. You want to make sure that you have as much evidence that it’s safe as you can, you want it to be tested on thousands, preferably tens of thousands of people, before you give it to tens of millions of people.

You do the best you can pre-licensure to determine whether there is a safety issue, but it’s only post-licensure that you really learn that. And from what I’ve heard, this may not even go through a typical licensing process. I’m on the FDA’s so-called VRBPAC (Vaccine Related Biological Products Advisory Committee). Technically this vaccine would go through our committee first before it was licensed, but I’m not so sure that is even going to happen. It has already gone to clinical trials and after those, it may just go right to production and distribution. I am worried about that. Remember, a healthy person who is younger than forty-five years of age is very unlikely to die from this virus. You want to make sure that it’s safe before you put someone in a potentially unsafe position.

The only other thing I worry about, which I don’t think is likely at all but should be looked at, is called ADE (antibody-dependent enhancement)—which is similar to the Dengue vaccine—and that is people get the vaccine and then when they are exposed to the natural virus, the wild virus, they do worse. I don’t think that will happen, but you do want some information on that before you give it to tens or hundreds of millions of people.

Heilbrunn: Finally, what about anti-virals?

Offit: Drugs like hydroxychloroquine, azithromycin, remdesivir and favipiravir should also be tested. So we can see if these will help us decrease mortality.

Dr. Paul Offit is the Director of the Vaccine Education Center and an attending physician in the Division of Infectious Diseases at Children’s Hospital of Philadelphia. His latest book is Overkill: When Modern Medicine Goes Too Far.