Why Cuba Isn't Getting Much from Russia or China 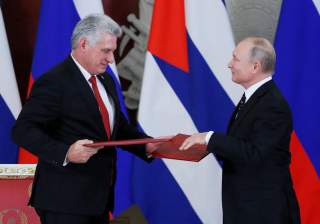 In November 2018, Cuba’s President Miguel Diaz-Canel ventured to Moscow, where Russian president Vladimir Putin warmly greeted him. In many respects, Diaz-Canel’s visit had an echo of the Cold War days, when Fidel Castro was a welcome guest of Kremlin leadership. Although Russia is not likely to provide the same largesse it did in the past to keep Castro in power, it could give enough assistance to further rekindle an old relationship and irritate U.S. policymakers. Indeed, at a time when global politics are slipping into a new Cold War, Cuba has regained some of its charm for Moscow.

During the Cold War, the dynamic between Russia and Cuba was straightforward; they needed each other to advance their own goals. When Fidel Castro came to power in 1959 and launched the Revolution, relations with the United States rapidly deteriorated over many issues, such as the expropriation of U.S. businesses and Havanna’s support for like-minded revolutionary groups in the Caribbean and Latin America. The United States responded with the failed Bay of Pigs invasion, an economic embargo and assassination attempts on the Caribbean nation’s dictator.

In the Cold War, Cuba was an ideal ally for the Soviet Union. Located close to America, yet definitely anti-American, it allowed Moscow a base from which to project its power through support for Caribbean and Latin American left-wing political groups and conduct intelligence gathering. In return, the Soviets supplied Cuba with financial and security benefits, estimated at around $4 billion in annual subsidies through the 1980s.

When the Soviet Union collapsed in 1991 its generous assistance to Cuba ended. As Russia emerged out of the Soviet ruins, it embarked upon painful economic reforms that created a more market-oriented economy. For Cuba, the years following the Soviet collapse were painful, called the “special period,” during which the island’s transport system came close to collapse, and famine was narrowly averted. Cuba, however, was able to find another external donor with the arrival of Venezuela’s Hugo Chavez who assumed the presidency of the oil-rich South American country in 1999. Chavez was an admirer of Fidel Castro, and soon the two countries developed a close working relationship constructed around cheap Venezuelan oil exports traded for Cuban security forces and doctors.

Cuba’s reprieve from economic reform lasted until 2014 when oil fell drastically, having a devastating impact on a badly mismanaged Venezuelan economy. Compounding the problem for Cuba was that Chavez died in 2013 and his successor Nicolas Maduro proved to be stunningly inept regarding the economy. That situation was further complicated by Maduro’s increasing reliance on his military and Cuban intelligence forces to help him remain in power. From 2015 to the present, Venezuela’s assistance has withered. As Venezuela’s oil production plummeted to 1940s lows, Cuba once again found itself in need of external economic support.

Venezuela’s decline forced tough decisions in Cuba. Although Cuba had close relations with China, which emerged as an important economic force in the Caribbean in the early twenty-first century, Beijing has little intention to provide the same largesse as Venezuela had. Moreover, China wants to see Cuba make market-oriented reforms, which Beijing already did starting in the late 1970s. China is now the world’s second largest economy, and it remains under the control of the Chinese Communist Party, something that it has often stressed to its Cuban foot-dragging counterparts.

Another complicating factor for Cuba—and something to help push Havana closer to Moscow—is that the effort to normalize relations with the United States had limited upside. While President Barack Obama visited Cuba in 2016 and met with the Castro brothers and formal diplomatic relations were renewed, the election of Donald Trump saw a hardening in the U.S. position in 2017. By 2018, prospects for the U.S. tourist and foreign investment as potential forces to help boost the Cuban economy were increasingly being ruled out.

Moreover, relations with America soured over alleged sonic attacks on U.S. diplomatic personnel in Cuba, leading to the expelling of fifteen Cuban diplomats from the United States. In November 2018 relations took another downward plunge, when President Trump’s National Security Adviser, John Bolton, lumping Cuba together with Venezuela and Nicaragua, called them a “troika of tyranny.” Bolton noted that they represent “destructive forces of oppression, socialism and totalitarianism.” With the announcement of new sanctions on Cuba and Venezuela, Bolton further proclaimed that the trio “has finally met its match” with the Trump administration.

U.S. officials have also been signaling to countries in the Caribbean and Latin America that they should be careful in accepting assistance from China, which in the last decade has emerged as a counterpoint to America. Washington was concerned by Beijing’s willingness to provide considerable assistance to local infrastructure needs and trade. This matters because meanwhile, America has been cutting assistance, imposing tariffs, and taking a hard line on immigration from the region. It is in this deepening Cold War in the Caribbean between the United States on one side and China and Russia on the other, Cuba has regained a degree of geopolitical significance.

The major question for policymakers in Cuba is how much value can they extract from their countries newly enhanced geopolitical value. While Diaz-Canel was given red carpet treatment during his stops in Moscow, Pyongyang, Beijing, and Hanoi, he found the same message—resources are limited, and Cuba needs to make economic changes. The Cuban government has already lowered its economic growth forecast for 2018 to 1.0 percent (it could go lower) due to lower sugar and mineral exports as well as lower tourist receipts.

Cuba is also facing a new economic blow with the arrival of the right-wing Bolsonaro government in Brazil in the aftermath of the October 2018 election. The new Brazilian government is ending the Cuban doctors program in South America’s largest country. Under the program more than eight thousand Cuban doctors have been working in Brazil’s rural areas and have received only 30 percent of their salary; the remaining 70 percent goes directly to the Cuban government. To keep these medical staff from defecting, the Cuban government does not allow its doctors to take their families with them. The Brazilian president-elect raised questions about this, calling Havana’s treatment of its medical personnel as “inhumane.” Ending the program in Brazil could cost the Cuban government an estimated $300 million in hard currency reserves.

Cuba must consider its options. Economic reform faces considerable resistance from entrenched local interests, including the armed forces, the Communist Party and the bureaucracy. At the same time, the economy has stagnated and Diaz-Canel, the first non-Castro family leader to head the country since 1959, faces a disenchanted population.

Although the warm welcome in Moscow for a country shares the burden of U.S. economic sanctions was no doubt a feel-good moment for Cuba’s president, he did not return from Russia with another pipeline of economic goodies like in the Cold War days. The key items from Russia included a $50 million line of credit for Cuban purchases of Russian military weapons and spare parts (announced prior to the visit); contracts of only $260 million of projects (some already in the pipeline), including upgrades to Cuba’s railroad system and the construction of three power plants and one metal processing plant; and agreements on a fiberglass factory, oil exploration along Cuba’s northern coast, the purchase of Russian LED light bulbs and export of a Cuban drug against diabetes.

Cuba does not want to be cast back into international isolation by the Trump administration. The leadership is also reluctant to make any major changes in its economic policies as it fears it could lose control of the process. In this, Cuba’s leaders find Russia an old friend willing to extend a helping hand.

On Russia’s part, Cuba is an opportunity to lay further claim to its being a global power that cannot be ignored. The Russia of 2018 is not the Russia that staggered out of the Soviet rubble in 1991. Moscow is more confident and under Putin operates with a sense of grievance about the West—the United States in particular—that took advantage of it when it was down. With changing tides of Caribbean geopolitics, Cuba again represents an opportunity. However, it is important to stress that there are limits as to what Russia can offer and to what Cuba currently is willing to do to make itself a more attractive economic partner.

It was Mark Twain who is credited with the following, “History does not repeat itself, but it rhymes.” Thus far this is the case between Cuba and Russia; there are distinct historical echoes from the Cold War; but the fulsome embrace is likely to remain more optical than evident in tangible assistance—at least until Cuba is willing to invest in more market-oriented reforms and have more to offer potential economic partners.