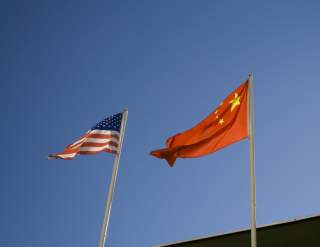 CHINA’S ENORMOUS population and rapid rate of economic growth mean that Beijing could soon dislodge Washington from its standing as the most dominant power in Asia. The Economist, for example, predicts that China could overtake the United States as the world’s largest economy—an important measure of national power—in the year 2021. Moreover, we know that military might tends to follow economic heft. Beijing’s ongoing military buildup is already constraining America’s ability to project power in the Asia-Pacific region. If China follows Washington’s lead in investing in global power-projection capabilities, decades from now it could conceivably usurp global military supremacy from Washington.

Or will it? The place to look for an answer to whether China really will become the globe’s most dominant power is not primarily in the economic or military realm. The more pertinent area of interest is China’s domestic political institutions, and they suggest that a more equivocal answer is warranted to the question of whether China will emerge as number one. Many Western political theorists have held that states ruled by democratic institutions perform better in long-run political competitions, and contemporary social-science research concurs. It is no accident that the most dominant states for the past several centuries, the United Kingdom and the United States, were also among the most democratic, or that their autocratic challengers, Imperial (and then Nazi) Germany and the Soviet Union, eventually imploded. Similarly, America’s institutions are its key competitive advantage in the coming contest with China. Far from China emerging supreme, there is every reason to believe that the American era will endure—and there is even reason for Washington to fear, not welcome, the possibility of a future democratic transition in China.

The notion that states with representative forms of government can accumulate power more effectively than unrepresentative regimes is an enduring one. Classical theorists often drew a distinction between democracy, a degenerative form of government characterized by “mob rule,” and republicanism, a “mixed” system characterized by popular participation and rule by representatives, which more closely matches contemporary models of democracy. Polybius, Montesquieu and Machiavelli all suggested the possible benefits of republican forms of government and identified Rome’s domestic political institutions as the principal driver of the rise and subsequent fall of the Roman Empire.

In The Histories, Polybius provides a history of Rome, but his primary purpose is to explain the sources of its success. “The most admirable and educational part of my project,” he wrote, “was that it would let my readers know and understand how, and thanks to what kind of political system, an unprecedented event occurred—the conquest of almost all the known world in somewhat under fifty-three years, and its submission to just one ruler, Rome.” Polybius’s explanation is straightforward: “The chief cause of either success or the opposite is, I would claim, the nature of a state’s system of government.” It was the strength of Rome’s domestic political institutions, according to Polybius, that allowed it to best its competitors and conquer the known world:

If one thinks that it is a finer and nobler thing to be a world-class leader, with an extensive dominion and empire, the center and focal point of everyone’s world—then one must admit that the Spartan constitution is deficient, and that the Roman constitution is superior and more dynamic. The facts themselves demonstrate the truth of this.

In his Considerations on the Causes of the Greatness of the Romans and Their Decline, Montesquieu also examines the relationship between the openness of Rome’s domestic political institutions and its international standing. On the basis of republican institutions, Rome rose to prominence, he says, but the demise of the republic under Caesar and the tyranny of subsequent emperors sowed the seeds of decay. He writes, “By means of their maxims they conquered all peoples, but when they had succeeded in doing so, their republic could not endure. It was necessary to change the government, and contrary maxims employed by the new government made their greatness collapse.”

No thinker did more to presage contemporary social-science arguments about the international advantages of open governments, however, than Machiavelli. While better known for his advice to authoritarian leaders in The Prince, in The Discourses on Livy, Machiavelli extols the virtues of republics. Indeed, Machiavelli goes so far as to advise a wise prince to use his fleeting power to establish a republic because a republican constitution provides the best means of ensuring a polity’s lasting legacy. “For it is seen through experience that cities have never expanded either in dominion or in riches if they have not been in freedom,” he says, continuing, “The reason is easy to understand, for it is not the particular good but the common good that makes cities great. And without doubt this common good is not observed if not in republics.”

MODERN SCHOLARSHIP is also supportive of the idea that democracies are bound to lead. Economists Daron Acemoglu, Simon Johnson and James A. Robinson have shown that states with inclusive economic institutions, those that provide “security of property rights and relatively equal access to economic resources to a broad cross-section of society,” grow at more rapid rates than their exclusive competitors. They argue that states that exclude large segments of their population from growth-enhancing activity will do worse than those that do not. Moreover, a state’s choice of economic institutions is, in turn, heavily shaped by its political institutions. Countries with inclusive political institutions (i.e., democracies) are more likely to produce good economic institutions because those in power come from a broader cross section of society and, therefore, have incentives to protect the economic interests of society at large. In addition, constraints on executive power allow rulers to credibly commit to protecting individual property rights, which encourages citizens to engage in long-term planning, investment and economic activity.

Not only do democracies grow at faster rates, but they are also better able to borrow when times get tough. Kenneth Schultz and Barry Weingast have shown that democracies are more likely to become financial powerhouses because they are more trustworthy. Whereas autocrats can arbitrarily default on their nation’s debt, for example, democratic executives are constrained by domestic legislatures, courts and economic interests with access to the political system. This makes it easier for them to attract capital and to float large loans at lower rates of interest.

The democratic advantage extends beyond the economic sphere, however, into political-military matters. Political scientists think that democratic leaders are reluctant to shirk their alliance commitments because they fear the reputational costs at home and abroad. For this reason, democracies form larger, more durable and more reliable alliances. NATO is only the most prominent recent example. In addition, the well-known democratic-peace theory holds that democracies are less likely to fight wars (at least against other democracies). More importantly, they have a better chance of winning the wars they fight. Indeed, since 1815, democracies have won a whopping 77 percent of their conflicts, compared to only 45 percent for autocracies. Political scientists such as Dan Reiter and Allan Stam postulate that democracies are more effective in warfare because their leaders benefit from the free flow of information and, with an eye to the ballot box, they are less likely to get caught up in disputes they might lose. Others extol the virtues of democracies’ superior soldiers, civilian-controlled militaries and stronger alliances.

Of course, as in any academic field, the findings reviewed above are subject to debate. Nevertheless, where there is smoke there is fire, and there is more than enough reason to believe that there is something different about democracies.

Moreover, the likely advantages held by democracies are far from trivial. Rather, they go to the heart of a state’s ability to maintain and accrue power in an anarchic international system. In his classic book War and Change in World Politics, Robert Gilpin argues that “differential rates of economic growth” are the key determinant of power transitions among the great powers. Centrality to international capital markets is another important resource. The ability to borrow allows states to finance arms buildups and large wars in excess of normal revenue. In addition, easy access to credit allows states to engage in “tax smoothing,” financing extraordinary expenditures through debt rather than through tax increases, which reduces economic and societal disruptions. The Dutch Republic provides an example of a country that was able to rise to geopolitical prominence in the seventeenth century in large part due to its ability to obtain cheap credit.

Alliance politics are another central feature of international political competition. Strong alliances allow states to share defense burdens, securely engage in long-range strategic planning and deter international conflict. Shifting and unreliable alliances, on the one hand, or relative isolation, on the other, deprive states of these advantages and have been identified as a source of insecurity.

Finally, and most obviously, states that win wars are better able to accumulate power than those that lose them. Nations victorious in war can reduce threats to their security and can gain political influence and access to resources that enable them to improve their international position. In contrast, losing a war disastrously may be the most direct way in which a state can squander its standing. In 1941, for example, Germany possessed 20 percent of world power (according to the Correlates of War Project’s Composite Index of National Capabilities, a common measure used by political scientists, which aggregates information on economic, demographic and military resources), but by 1945, following its catastrophic defeat in World War II, Germany’s share of global power plummeted to a mere 8 percent. Over the same time period, however, the leader of the victorious alliance in World War II, the United States, saw its share of global power increase by 14 percentage points. As Paul Kennedy writes, “The triumph of any one Great Power . . . or the collapse of another, has usually been the consequence of lengthy fighting by its armed forces.”