Why Did Russia Change Its Tune on the Iran Nuclear Deal? 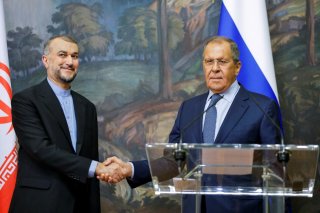 In late August, Mikhail Ulyanov, Russia’s chief nuclear negotiator in Vienna, urged the United States and Iran to “successfully overcome their last differences as soon as possible” in order to revive the 2015 nuclear deal. This encouragement contrasts with Moscow’s position in March, when it called for the exemption of Russian-Iranian trade from international sanctions against Russia as part of a final atomic agreement. The Kremlin’s demand ground the talks to a halt.

Six months later, Moscow’s worries about its energy sector have become particularly pressing, as European countries have pledged an energy boycott of Russia by the end of the year. In 2021, members of the European Union (EU) imported 2.2 million barrels per day (bpd) of crude oil from Russia. Normally, Russia’s oil exports to the EU give Moscow political leverage over it. But a boycott means that EU countries will be looking to import oil from other countries, including the Iranian oil that the nuclear deal would add to the market.

According to an estimate by the Foundation for Defense of Democracies, during the first year of a resuscitated agreement, Iran could export 2 million barrels per day of its crude, around one million barrels more than what it exports now. Per the Islamic Republic News Agency, 38 percent of Iran’s crude oil export in 2017 went to Europe. Since then, due to U.S. sanctions against Iran’s oil industry reimposed by the Trump administration in 2018, Europe has not bought any oil from the country.

If the share of Iran’s oil exports to Europe relative to its total oil exports goes back to its 2017 level, it will give Europe access to 800,000 bpd of newly arrived crude oil. As a result, the deal has the potential to decrease Russia’s leverage over the European Union and allow European countries to decouple themselves from Russian oil with less pain this winter.

In light of this reality, why has the Kremlin changed its tune on the nuclear deal?

The answer is likely that Russia’s assessment of the costs and benefits of the accord has changed. Even if the agreement reduces Russia’s leverage over Europe, Moscow may benefit from the revival of the accord in five ways.

First, Western sanctions have limited Moscow’s access to the international banking system. If Washington lifts banking sanctions on Iran, Moscow can access the international financial network through Iran. Tehran, a key partner to Moscow, has years of experience in sanctions-busting, which it can use to assist Moscow.

Second, the sanctions relief in the deal enables a $10 billion contract between Moscow and Tehran to build a nuclear site in Iran. The deal has remained dormant due to sanctions. However, the new nuclear deal will provide Iran with resources to pay Russia.

Third, with the expired sunset of the UN arms embargo against Tehran, Russia can now sell Tehran a wide array of conventional weapons that may be worth billions of dollars. For years, Iran has expressed its intention to buy modern weapon systems from Russia. However, sanctions and Iran’s lack of financial resources, among other things, have prevented such deals so far. With Iran’s access to tens of billions of dollars and Russia’s international isolation, Tehran’s wish list may finally become reality.

Fourth, over the last few months, Tehran and Moscow have engaged in extensive negotiations to expand their cooperation in the energy sector. Iranian officials are on the record confirming that Tehran and Moscow, as part of a new nuclear deal, may swap oil as a way to bypass sanctions against Russia. In fact, Russia’s state-owned energy giant Gazprom signed an early-stage $40 billion oil and gas deal with Iran in July. While the return of the Islamic Republic to the oil market can increase pressure on Russia, the two sides seek to mitigate those negative effects through cooperation.

Finally, a massive injection of cash into Iran’s coffers means that Tehran may be able to offer more help to Russia for its war in Ukraine. Tehran has already provided robust military and diplomatic support for Moscow’s invasion. In a recent meeting with Russian president Vladimir Putin, Iranian supreme leader Ali Khamenei expressed support for the Kremlin’s decision to go to war. In April, the Guardian reported that Russia was using Iranian-made weapons smuggled through Iraq. In August, U.S. officials said that Iran had begun shipping scores of combat drones to Russia for use in the war.

Russia, the Islamic Republic, and Tehran’s Shiite militias fought alongside each other in Syria. The growing strategic ties between Moscow and Tehran mean that the Islamic Republic’s access to billions of dollars may lead to more and bolder intervention in Ukraine. As Russia’s international isolation continues to grow, Moscow will find the mere possibility of such support invaluable.