Why Doesn't Bernie Sanders Have a Socialist Foreign Policy? 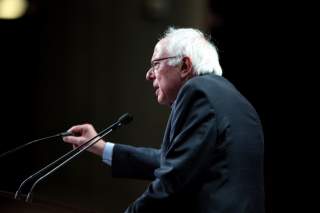 With the Democratic primaries coming to an end, the fate of Bernie Sanders is sealed. His insurgent campaign surprised everybody in advancing so far, and gave a good fight to a powerful establishment figure like Hillary Clinton. The question of whether he could have done better if he had focused on foreign policy is one that, while vital, hasn’t really been asked. The usual assumption is that Hillary is a hawk and that Bernie is to her left on foreign policy. That is a fairly honest answer, given their voting records; however, the fact that the first man to call himself a socialist in a Democratic primary has a foreign policy with not much difference from a mainstream liberal raises the question of whether there exists a socialist foreign policy in the U.S. context.

If one looks to the tradition of American socialism, one can argue that there is certainly an anti-imperialist tradition, represented especially by Eugene Debs and Norman Thomas. On the other hand, there is another viable theory—call it “Trotsky in the White House.” In the George W. Bush years, libertarians and paleocons pointed that the ones promoting interventionist foreign policy weren’t limited-government conservatives, but rather former socialists—especially Trotskyites—and that while they rhetorically abandoned socialism, they never gave up the theory of permanent revolution, now disguised as promoting democracy abroad. There is now a third tradition, represented by Bernie Sanders, that is concerned with preserving the architecture of international relations and includes defending not only the UN but also NATO.

The anti-imperialist tradition is socialism’s oldest one. There is an often dismissed factor in the history of American socialism—namely, that the socialists of the early twentieth century had a certain distrust of big government and sympathy for decentralization. Neither Debs nor Thomas were exactly Marxists or Social Democrats in the European sense. They were deeply American in their political theory, calling for a third American Revolution against capitalism. Their foreign policy was part of a worldview that saw war not as the health of the state, like libertarians, but as a central factor in the exploitation of working class who were forced to fight wars to advance the objectives of the elites. This tradition survived after the fall of the Socialist Party of America—today’s Green Party, the largest American left-wing party, has a largely antiwar platform. Like the SPA, its poll numbers are poor, but unlike the SPA, it lacks figures with the gravitas of Debs and Thomas.

The “Trotsky in the White House” theory is something that, while written about, has several inconsistencies. While is difficult to deny that they original neoconservatives had radical origins, that is not the case for today’s neocons. Probably the most prominent neoconservative of the current generation is Sen. Tom Cotton, who has not the tiniest attachment to the radical left—and he is not the only one. The last neoconservative convert from socialism was Christopher Hitchens, who probably is a complete stranger to younger millennials. The proponents of this theory ignore that there existed a tradition in American conservatism that, while hawkish, had nothing to with Trotskyism or socialism. Neoconservatives have definitely shaped the American political history; however, I doubt that any neocon would defend a socialist like Bernie Sanders. To their credit, libertarians and paleocons recognized that on foreign policy the Debs/Thomas tradition is still alive in the likes of Ralph Nader, Jeremy Scahill, Amy Goodman and Cornel West, to mention a few.

There are some American socialists like Bernie Sanders, who at a certain point embraced most of a more ordinary liberal foreign policy. While slightly to the left of Obama, Sanders sounds like the average European Social Democrat, especially defending militarism in humanitarian language. In large part, a Bernie Sanders presidency would have been a preservation of the status quo in foreign policy.

While Sanders is calling for a political revolution, his foreign policy sounds to right of even some liberal Democrats. As Michael Walzer has pointed out, for example, the Balkan War was supported by several countries that at the time were governed by left-wing governments, and as Samuel Goodman asks, if most socialist parties in Europe have supported militarism, why suppose that history would be different if there were a large socialist presence in America? Some could argue that socialists in America are so idealistic because they never held power. But Ron Paul, for example, is proof that someone can serve in government and still be a proud anti-imperialist.

There is another issue that is often ignored: the effect of foreign policy on elections. While Debs, Thomas and many of their comrades showed bravery and conviction in opposing both World Wars, they were consequently painted as anti-American—a repercussion that led the Socialist Party of America to its extinction. Even in recent years, one could argue that American voters have shown they are not so left-wing in foreign policy. In 2004 and 2006, Chuck Schumer and Hillary Clinton were challenged by David McReynolds and Howie Hawkins who, while running as Green Party candidates, were veterans of the antiwar movement of the sixties and seventies as members of the Socialist Party USA (the most direct link between the SPA and the New Left). They both ran antiwar campaigns but got less than 1 percent and 2 percent, respectively.

If Bernie Sanders decided not to make foreign policy a central part of his campaign, it is because his focus was domestic policy—otherwise, it would be asking Bernie Sanders not to be Bernie Sanders. But one can tell that, like Clinton, who began as an antiwar activist, his views on foreign policy have shifted to the right, though not to the point of being endorsed by neocons.

Another fact is that while Bernie Sanders claims to be a socialist, many American socialists disagree. They have a point. While some groups on the far left hold ridiculous positions like backing North Korea, making them a parody of Marxists, they made a valid point about Sanders: after all, he is not a socialist in the Marxist sense—he is not calling for massive nationalization or abolishing the means of production, but for liberal reforms inside a capitalist structure though he may not like the word. He even claims to be following the legacy of the New Deal and FDR. Considering that FDR ran against Thomas, one could argue that Sanders is more of a social democrat than a socialist. Socialists always value their class independence as a defense for not running as candidates in the parties of the oligarchy. His foreign policy is closer to that of social democrats like Michael Harrington and Bayard Rustin, interested in shifting the Democratic Party to the left, and more focused on domestic issues than on foreign policy, where at times they can sound hawkish.

The fact that Bernie Sanders supports the F-35 jets that are made in Vermont shows his embrace of Keynesian militarism. His support for the U.S. air campaigns in Yugoslavia and Libya shows his commitment to humanitarian intervention. His support for drone strikes shows that he can be hawkish at times.

On Israel, he is to the left of the Democratic establishment—no other politician would appoint someone like Cornel West to the DNC—but he is still not as far to the left as some of his fans would like him to be. He is opposed to BDS, which has support among his activist base. The left has undergone a shift on Israel in general, while the fact that Netanyahu appears closer to the GOP has altered the perception of Israel as a bipartisan issue. Sanders’s Jewish heritage is another interesting aspect of his candidacy; a very particular brand of early twentieth-century Jewish radicalism was fundamental in developing his worldview.

On Venezuela, there is are more questions than answers. Sanders called Chávez a “dead communist dictator” while President Nicolás Maduro basically endorsed him. The Vermont senator has basically avoided questions about the situation of Venezuela. Right-wing critics of Sanders use Venezuela as an example that socialism is a failure; Bernie could had responded that there are important differences between New Deal economics and Bolivarian socialism.

There are three traditions of socialist foreign policy worth discussing in the American context. The anti-imperialism of the Debs/Thomas variant is still alive, and is more instinctual than policy-focused. While besides Sanders there is no politician that call himself a socialist on the national stage, Seattle City Council member Kshama Sawant certainly has an antiwar foreign policy, but is still unknown outside the activist base. Cornel West and Chris Hedges come to mind as among the few public figures who hold this kind of vision about international relations. While there are no more neocons that identify as socialists, their politics are very far away from the average socialist of today. The Sanders tradition is not particularly different from mainstream liberalism, which brings us to the previous question: of why the American context lacks a proper socialist foreign policy.

Some would say that since socialists have been very sparse on the American political scene, they have been unable to develop their own policy. But from the example of libertarians, we know that this isn’t true. Libertarians, like socialists, have remained a marginal force in American politics; however, there are several libertarian think tanks that include foreign policy in their research, and libertarians are characterized by a vision of international relations. For example, anti-imperialism was a central part of Ron Paul’s campaigns. Libertarians are in general anti-interventionists; in theory socialists are too, but this seems not to apply to Sanders.

The belief in pursuing policies that promote social justice is, for liberals and some socialists, sometimes extended to overseas affairs. Promoting democracy, women’s rights and gay rights seems like a good offer, but the question is at what cost. Even Green Party presidential candidate Jill Stein has questioned Sanders, saying that there is a possibility that what Sanders is proposing is unachievable if he isn't willing to cut the military budget. There was a time when Sanders was a staunch anti-imperialist, running under the banner of the Liberty Union Party. But he was defeated in that election, and it was after serving as the independent mayor of Burlington that he was elected to Congress, promising a focus on local issues.

It is difficult to know what would have happened if Sanders had made foreign policy a central element of his campaign. He lacked the antiwar discourse of Dennis Kucinich, but he could at least prove himself to the left of Hillary in foreign affairs. The support of libertarians and socialists outside the Democratic Party could have helped him in the tightest races, like Iowa or Nevada, and victories there would have shifted the discussion. But perhaps what Bernie feared was being painted as a far-left anti-American, and consequently being marginalized like Dennis Kucinich and Mike Gravel.

It is too early to predict what will happen to the movement Sanders has ignited. But the fact that the word “socialist” is no longer taboo in American politics opens a possibility for the development of a socialist foreign policy. Younger generations might still be talking about the New Deal in economics, but they could discover that brave men and women, who were socialists when it was not only unpopular but also dangerous, had a foreign policy that argued justice at home could only be achieved if the United States abandoned its imperial ambitions.

Camilo Gómez is a political writer at The Mitrailleuse.