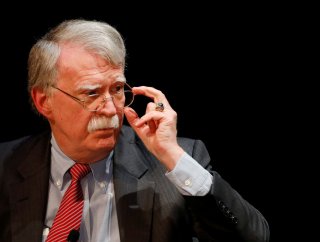 Former National Security Adviser John Bolton’s bestselling memoir The Room Where It Happened remains the inadvertent recipient of the White House’s promotional efforts. The Justice Department has already convened a grand jury to help determine whether Bolton illegally released classified information in his book. Now the New York Times is reporting that a top national security council career official named Ellen Knight is alleging that White House aides legal counsel and NSC legal aides, including John Eisenberg and Patrick Philbin, improperly intervened to suppress Bolton’s memoir, seeking to “coerce her to join their efforts, and suggesting that they retaliated when she refused.” She says that she met with them for no less than five days and eighteen hours of meetings, but refused to buckle. The government then conducted a second review to get the results it originally wanted.

Bolton, who relishes intellectual and political combat, is sure to welcome the fresh confrontation with the White House. It has a number of upsides for him. It raises questions about the behavior of Trump’s aides, putting him in the role of victim. It undermines the contention that he leaked classified information. And it is sure to increase his book sales further. Whether or not Bolton has to return his book advance to the federal government, he’s already winning in the court of public opinion.

Knight apparently determined, much as you might expect, that Bolton’s book contained no classified information. The truth is that much of what he recounted could be gleaned from perusing media reports about the Trump administration. As George F. Kennan once observed,

“It is my conviction, based on some 70 years of experience, first as a government official and then in the past 45 years as an historian, that the need by our government for secret intelligence about affairs elsewhere in the world has been vastly over-rated. I would say that something upwards of 95% of what we need to know about foreign countries could be very well obtained by the careful and competent study of perfectly legitimate sources of information open and available to us in the rich library and archival holdings of this country.”

Bolton’s juicy anecdotes about Trump requesting election assistance from China’s Xi Jinping or his cozying up to North Korea’s Kim Jong-un hardly constitute national security secrets. Instead, they depicted Trump in an unflattering and embarrassing light.

The truth is that the federal government wildly overclassifies documents and secrets. In 1997 Sens. Daniel Patrick Moynihan and Jesse Helms proposed a statute called the Government Secrecy Act to try and rollback the classification mania. It never happened. There are multifarious reasons for the relentless spread of classification but the preeminent one is to increase the power and prestige of mid-level government officials.

“Every bureaucracy seeks to increase the superiority of the professionally informed by keeping their knowledge and intentions secret. Bureaucratic administration always tends to be an administration of ‘secret sessions’; in so far as it can, it hides its knowledge and action from criticism. The pure interest of the bureaucracy in power, however, is efficacious far beyond those areas where purely functional interests make for secrecy. The concept of the 'official secret' is the specific invention of bureaucracy, and nothing is so fanatically defended by the bureaucracy as this attitude, which cannot be substantially defended beyond these specifically qualified areas.”

Now the Trump administration is trying to wield secrecy and classification against Bolton. But in trying to game the process against Bolton, its measures may have backfired. In Bolton, a seasoned bureaucrat himself, it has encountered an adversary that it cannot easily crush.