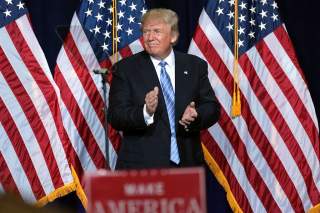 No other inaugural address, it’s safe to say, has ever drawn Donald Trump’s contrast between “American carnage” and American greatness. His speech was nothing like the polished, soothing, and rather nebulous talk the public has been accustomed to hearing from victorious politicians. Trump was not celebrating; he was readying the country for war. Specifically, a class war—not along Marxist lines but instead nationalist ones, with citizens exhorted to buy American and hire American, to put “America first” in everything from commerce to foreign policy.

Trump also departed from the language of global hegemony that has marked inaugural addresses and presidential statements since the end of the Cold War. With echoes of an older U.S. strategic outlook—that of George Washington, Thomas Jefferson, and John Quincy Adams—Trump said, “We will seek friendship and goodwill with the nations of the world, but we do so with the understanding that it is the right of all nations to put their own interests first.” And without explicitly alluding to a “shining city on a hill,” Trump restored the metaphor’s original meaning: “We do not seek to impose our way of life on anyone, but rather to let it shine as an example.”

Trump’s words don’t bear comparison with the eloquence of Washington or Jefferson, of course, but it was a very good speech, vastly superior to vapid pretentiousness of most recent presidential rhetoric. What Trump has done is to establish a new tier in the history of inaugural addresses. The classic phase that lasted from the Founders until Lincoln won’t be matched, and the grand rhetoric of Cold War presidents like Kennedy and Reagan, lofty yet credible, is likewise a thing of the past. After Reagan, inaugural addresses became parodies of what they had been in the decades when America was tested by world wars and superpower rivalry. The speechwriters were skilled, but their words rang false. Trump’s words rang true, at least as an expression—clear and forceful—of how the president and his voters see the state of country.

Even Trump’s critics should appreciate the clarity of his words and their import. Throughout his time as a candidate and now in his first remarks as president, Trump has drawn a new map of politics. That map needs be used to navigate only in the direction that Trump wishes to go. Certainly Bernie Sanders and other class warriors of the left could try to appropriate Trump’s appeal to national solidarity.

The contrast between Trump’s emphasis on unity and Sen. Charles Schumer’s remarks only a few minutes earlier, in which the Democratic senator ran through the litany of identity politics, was revealing. “Whatever our race, religion, sexual orientation, gender identity, whether we are immigrant or native-born, whether we live with disabilities or do not, in wealth or in poverty,” said Schumer, somehow not pausing for breath, “we are all exceptional in our commonly held, yet fierce devotion to our country, and in our willingness to sacrifice our time, energy, and even our lives to making it a more perfect union.”

Schumer’s vision of America, the vision of the multicultural left, is of a Frankenstein’s monster, stitched together out of unmatched parts. Is “gender identity” really on the same level as race and religion? Is “disabilities or not” a category that’s relevant in an address to the whole nation? Elite liberals like Schumer have lost all sense of proportion and priority, which may not be a problem in New York or California but is fatal in places like Wisconsin, Ohio, and Pennsylvania. They show much more concern about expanding the checklist of identity groups to be counted up than they do for making a case about any kind of common good.

Trump, by contrast, draws out only the most essential divisions, above all the division between the globalist political establishment and the nationalist spirit of the American public. His inaugural address is the beginning of a new era. It may prove short-lived: perhaps after Trump, in four or eight years, the next president will return to the rhetoric of the Clinton-Bush era. But I doubt it. There may never be another Trump, but he has decisively punctured the inflated jargon of our political class. After this, it will have to find a new language.