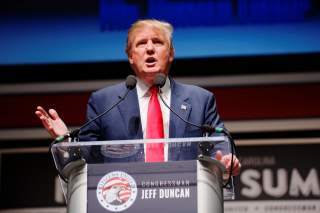 During the call, each congratulated the other—Tsai captured the presidency in a landslide in mid-January—and both spoke of close relations.

Beijing’s initial reactions, issued by China Central Television, the state broadcaster, and the foreign ministry, were mild, as was the protest, but expect tempers in the Chinese capital to flare in coming weeks.

Why? In a few short minutes over the phone, Trump implicitly recognized Taiwan’s status as a sovereign state, thereby breaking with decades of settled China policy.

The call, as many have noted is the first known interaction between a U.S. president or president-elect with his Taiwan counterpart since the Carter administration broke diplomatic relations with the island.

Regardless of what Trump and Tsai said to each other, the fact the call took place would be sufficient to upset Beijing’s leaders, who view Taiwan as part of their People’s Republic of China.

Tsai, on the other hand, believes she heads a state called the Republic of China. Formally, her government takes the position it has sovereignty over all China but, as a practical matter, acts as if it is sovereign over only the main island of Taiwan and scattered islands it in fact administers.

Washington recognizes Beijing as the lawful government of China but in substance maintains the dispute between the two sides is unresolved and insists the resolution of the matter, when it occurs, be peaceful. The Taiwan Relations Act, U.S. legislation passed in 1979, provides for unofficial ties with Taipei and creates limited obligations to protect the island from Beijing. This American posture has continued, with only minor modification, since that time.

Trump, however, seemed to change everything Friday. “During the discussion, they noted the close economic, political, and security ties exists between Taiwan and the United States,” notes the readout of the Trump transition team of the historic conversation. “President-elect Trump also congratulated President Tsai on becoming President of Taiwan earlier this year.”

Beijing will not miss the fact that Trump called Tsai “President,” an implicit recognition she is the head of a state separate and apart from China. And as if to emphasize the point, he labeled her country “Taiwan.”

Tsai rode to victory as the candidate of the Democratic Progressive Party, which wants “Taiwan” recognized as a separate state that does not include the “Mainland,” in other words, China.

About two-thirds of the island’s population, in survey after survey, self-identify as “Taiwanese,” in other words, not “Chinese.” Less than five percent call themselves Chinese and not Taiwanese. Beijing is worried that Taiwan, with its growing Taiwanese identity, will formally break away from “China” and declare itself the “Republic of Taiwan.” Tsai has yet to do so, but Trump just did.

And what can make this situation even more explosive? Beijing threatens to use force to absorb Taiwan, and the Communist Party of China primarily bases its legitimacy on its ability to “unify” the “Motherland.”

Significantly, Trump did not inform the White House or State Department beforehand. Nor did he consult what is effectively America’s liaison office in Taipei, the American Institute in Taiwan. All of them would have tried to stop him.

But the president-elect did not owe anything to any of them. As Henry Kissinger told Fareed Zakaria after the election, “he has absolutely no baggage.” His policies are his own, and he will write on his blank slate as he sees fit.

As a result, many are now expressing alarm. Chris Murphy, a member of the Senate Foreign Relations Committee, in a tweet acknowledged that “consistency is a means, not an end” but suggested Trump’s moves, including the call with Tsai, “are major pivots in foreign policy w/out any plan.” “That’s how wars start,” the Connecticut Democrat wrote.

Evan Medeiros, former Asia director on the National Security Council, told the Financial Times that Chinese leaders “will see this as a highly provocative action, of historic proportions” and that he is worried “Trump is setting a foundation of enduring mistrust and strategic competition.”

What Trump has done is not “reset” Washington’s relations with China but put them on an entirely new footing. Up to now, Beijing has kept the initiative, and American presidents, especially George W. Bush and Obama, have merely reacted, trying to build friendly relations in spite of increasingly bold Chinese moves. The concept was that Washington had to maintain cooperative ties, increasingly considered an end in itself.

Trump, by seemingly not caring about Beijing’s reaction, has cut China down to size, telling its autocrats he does not fear them.

Just about everyone assumed the Chinese would create a crisis for Trump in his first months in office, just as they created crises for both George W. Bush—in April 2001 with the detention of the crew of the U.S. Navy EP-3—and his successor—the harassment of the Navy’s unarmed reconnaissance vessels, the Impeccable and Victorious, in March and May 2009.

Instead, Trump took the initiative and created a crisis for China’s leaders, and he did that more than a month before taking the oath of office.

Therefore, Beijing is bound to find the next months unfamiliar and unsettling.

There is, if you need a metaphor, a rather large bull in the china shop. And, yes, that could be a good thing.