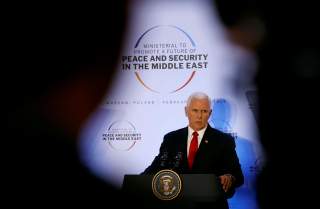 The U.S. national security community can often overlook how U.S. domestic policy can undermine American foreign policy goals. For example, take Secretary of State Mike Pompeo’s European tour this past month, and the efforts of Vice President Mike Pence at the Munich Security Conference to rally support for Washington’s preferred courses of action. There seems to be a glaring blind spot in how U.S. foreign policy analysts comprehend European resistance to U.S. efforts to increase the pressure on Russia and Iran.

In Hungary, for instance, Pompeo laid out before his hosts in Budapest a proposal to more closely align Hungary’s energy imports with its security relationship with the United States. Instead of signing on to Russian proposals to extend its Turkish Stream pipeline into the heart of central Europe, the Secretary of State encouraged the Hungarians to consider relying on U.S. liquefied natural gas (LNG) exports for their energy needs. Such a proposal would decrease Russian geo-economic influence in Europe and diminish the revenues available to the Kremlin for funding the Russian military. Furthermore, it would reinforce the foundations of the North Atlantic Treaty Organization alliance, on the grounds that allies not only defend each other, but they also buy essential goods and services from each other.

Pompeo’s proffer received a cool shoulder. Of course, it is natural to point the finger at Russia’s adept usage of tools of influence, especially financial, to keep government officials in favor of Russian projects. But that is not the complete story. Politicians in Europe, particularly when it comes to energy issues, are reluctant to eschew existing, proven and reliable suppliers of energy for projects that may not be realized.

It is very true that over the past several years, U.S. exports of energy have exploded onto world markets, as new technologies and methods unlock the hydrocarbon bounty latent in U.S. soil. Yet these methods are not universally accepted across the American political spectrum, and the apparent return to dependence on oil and gas is criticized by a number of leading U.S. political figures. Moreover, the long and torturous political saga of the Keystone pipeline shows that a geo-economic strategy of maximizing North American energy development and exports engenders significant domestic political resistance.

President Donald Trump adds a new political wildcard to the question. The direction in U.S. politics over the past few years has been for Trump’s political competitors to oppose his policy agenda even if, prior to 2016, they supported specific proposals themselves. To the extent that expanding U.S. energy exports is a signature issue embraced by the Trump administration, it becomes easier for those running again Trump and his legacy in the 2020 elections to oppose such efforts. By doing so, they stand to gain the support and activism of those domestic political groups who for environmental or other reasons oppose the expansion of the domestic hydrocarbon industry.

Imagine that I am a Bulgarian, Hungarian, or Austrian politician who is being offered a definitive Russian commitment to sell and market natural gas. Or imagine that I am a German or French leader who believes that, in the long term, Iran’s energy reserves are crucial for the continent’s economic development. Any official U.S. offer of an energy alternative depends, essentially, either on Trump’s re-election in 2020 or the unshakeable promise from any of Trump’s Republican primary or Democratic general election competitors to honor Trump’s commitments. In these circumstances, it is not difficult to see why Europeans may hedge their bets. Why bet the proverbial farm on a U.S. LNG supply across the Atlantic if there remains significant doubt as to whether a Democratic successor to Trump—particularly as 2020 candidates endorse the so-called “Green New Deal” with varying degrees of enthusiasm—would continue with such plans?

The Russians are also aided by the reputation that Putin has for “doing what he says” whether with regard to a Syria intervention or the construction of the Kerch Straits bridge—both of which many Washington experts predicted would never happen. With actual pipe being laid across the Black Sea to create a new energy transit route between Russia and European Turkey, southern and central European states will have easy and immediate access to supplies of Russian natural gas. In contrast, U.S. plans to increase exports remain on the drawing board.

Proponents of the Green New Deal and other such measures may be prepared to take the geo-economic tradeoff of short-term Russian advantage in Europe in return for giving the U.S. longer-term leverage should the new technologies lead to major energy breakthroughs. If so, they should acknowledge that trade-off openly. For Democrats and Republicans who do not, they too must make clear their policy priorities. One lesson from events in Europe this month, however, that cannot be ignored is that U.S. politicians do not have the option of keeping separate their domestic and foreign policy priorities. In short, choices need to be made and owned.

Nikolas K. Gvosdev is a senior fellow with the Foreign Policy Research Institute.