Why the Federal Reserve Will Survive Herman Cain and Stephen Moore 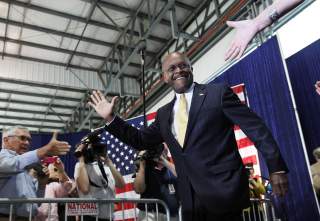 When the nominations of Herman Cain and Stephen Moore were announced by the White House, there was an immediate chorus of denunciations. The Federal Reserve is supposed to be independent, and these nominations smacked of partisanship. But the instantaneous critiques skirted the most critical question: Do they really matter?

There are problems with politicizing the U.S. Federal Reserve. The control of monetary policy is a powerful tool to yield. The Fed is frequently blamed for causing recessions by raising rates too much for the economy to handle to cool its growth rate. The Fed has also undertaken extraordinary measures to steady the economy by purchasing government bonds and holding rates near 0 percent for nearly a decade. There are good reasons why the Fed was set-up to be independent from politicians. It is also understandable why there is angst when the appointees are—at the least—obliquely political.

President Trump does not have a positive view of the Fed’s decisions in 2018, and his most recent nominees for the Fed share his view. Of note, Stephen Moore has stated—outright—that the Fed should immediately cut rates by 0.5 percent. This is a sentiment shared by Larry Kudlow, an economic adviser to President Trump. Moreover, it is not much of a leap to place Cain into the camp of wanting a 0.5 percent rate cut as well.

Aside from worries over the Fed’s independence, the credentials of the two have also been called into question. Once confirmed, the two would sit on the monetary policymaking committee and always have a vote as members of the Board of Governors. But regardless of whether the appointments are political or properly credentialed, the question of Moore and Cain’s potential effect on monetary policy remains.

The ways their influence could affect monetary policy outcomes is highly limited. The primary transmission is through forward guidance—the Fed’s communication policy about the path of policy. This includes the infamous “dot plot” where Federal Open Market Committee Members (FOMC) provide their individual outlook for the fed funds rate over the several years and the longer term. In addition, members use speeches to give guidance.

To understand how little they will matter, the dot plot is the best place to start. Currently, the Fed’s dot plot shows the median of the FOMC sees no rate hikes this year and one in 2020. Using the assumption that both Moore and Cain would place their dot 0.5% below the current fed funds rate at 1.875 percent, there is no change to the placement of the median dot at any time horizon (which makes sense). The average dot is only lower by about 0.1 percent. In other words, the dot plot does not really care about Moore and Cain.

And, while the dots from Moore and Cain would be 0.5% below the current level of rates and 0.75% below the 2020 median, they would not be alone in being policy outliers. There is still a dot expecting four hikes between now and the end of 2020 and two members dots show an expectation for three hikes. Moore and Cain would certainly be outliers, but they are not alone in being a bit vigilante. Simply, there is little to no change from the addition of their dots to the Fed’s forward guidance.

However, the impact Moore and Cain would have would come in less obvious ways. Both Moore and Cain would be likely to protest the FOMC’s guidance through dissenting against monetary policy decisions. They could also give speeches railing against future hikes and advocate for rate cuts. Without a doubt, they will have an audience for their opinions as, after all, the two get a vote on monetary policy. But their opinions and observations are unlikely to garner much attention from other members. Moore and Caine simply will not carry the gravitas and influence of the more serious members. Their dissents are likely to be viewed by Wall Street and global investors as a vote of confidence in the agreed upon monetary policy—not as signs of serious potential problems. There will be lots of noise, but very little signal.

Assuming Moore and Cain are confirmed, the Fed will survive this bout of partisanship. In an odd way, the challenge to the Fed’s independence could increase the trust in its monetary policies by showing its resilience to political interests. Maybe Moore and Cain are exactly what the Fed needs to regain some public trust and show it is truly independent. Who knows? The one thing that matters in this debate: Moore and Cain do not really matter, and monetary policy will not be truly affected by their nominations.