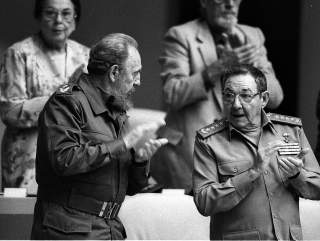 Cuba is a geopolitical time capsule — an island stuck in time since 1959 when Fidel’s revolution resulted in his takeover of the country’s leadership. Since then, the country has experienced very little political shift, a theme reflected in the old-school American cars rolling in the streets of Havana for the past 57 years.

As a result, Cuba's position shifted from being the "wild card" of Latin America. Once motivated by young and radical communist ideology, which, at its peak in the 1960s, almost pushed the Cold War superpowers to the brink of a nuclear war, Cuba has become one of the most predictable countries on the world stage. Residues of its once-glorious revolutionary past are now represented in Che Guevara t-shirts sold on eBay for $13.

The death of Fidel Castro marks the expected, and for some, much-awaited end of an era that has kept Cuba isolated from the world. There are also new expectations of upcoming changes in the country's policy, which is still driven by the same old 1950s Cold War ideology that ignores the changing world around it.

Many argue that, in recent years, Raul Castro, who has been ruling the country since 2006, has shifted the country's policy into a more open and pragmatic direction. They point to last year’s restoration of relations between the United States and Cuba, the removal of Cuba from the U.S. state sponsors of terrorism list, the lifting of various trade restrictions which now allow Americans to purchase unlimited quantities of Cuban rum and cigars, as well as the recent economic initiatives helping U.S. companies invest in the island.

Yet this recent shift in policy was driven by the United States, not Cuba. For years the U.S. government has conditioned the lifting of the trade embargo on Cuba improving the country’s human rights and political freedom record. Yet internally, Cuba has done little to nothing to advance these goals. As the 2016 Human Rights Watch report stated, the "Cuban government continues to repress dissent and discourage public criticism." In addition, Freedom House ranks Cuba bellow Iran and China in its 2016 report. Cuba’s internet access is still severely restricted and recent actions taken by the government to improve internet access have been described as a "drop in the bucket."

Thus, it is important to understand that Raul's guiding principle are ideology and his regime’s survival, not Cuba’s interests. This is why he has sought alliances with like-minded leaders such as Venezuela’s Hugo Chávez and Nicolás Maduro, Evo Morales in Bolivia, and Brazil’s former presidents and party leaders Lula and Dilma Rousseff.

Nor does Cuba’s recent role in brokering the peace deal between the FARC and the Colombian government represent a change in strategy. Cuba is motivated by the same principles and still seeks control over the country, but is pursuing these goals via democratic means rather than the revolutionary fighting Havana preached and supported in the past.

Fidel hasn't been ruling Cuba officially since 2008, and de facto, since he became ill in 2006. Thus, Fidel's death is not going to lead to any immediate changes in Cuba's policy. The recent U.S. elections have also increased the likelihood that, in the short term, U.S.-Cuban relations are going to enter a stalemate after the warming in recent years.

Yet in the long term, Fidel's death represents the one element that all regimes are defenseless against: the passage of time. Raul is 85 years old, and more than 80 percent of Cuba's 11 million residents were not born when the 1959 revolution took place. There are millions of Cubans who know nothing but the oppressive regime of the Castro brothers and they are getting more connected to the outside world every day. For many, Raul is now the last man standing between Cuba's pragmatic future and its ideological past.

Oren Kesler is Research and Projects Team Leader at Wikistrat. ​