Why Fighting Through Auxiliaries Usually Fails 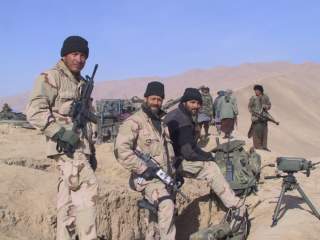 The crisis over the so-called Islamic State (or, ISIS) has once again led policy makers and the national-security community to think very hard about relying on auxiliary forces, either paramilitary forces such as the Syrian Kurds’ People’s Protection Units (YPG) or regional actors ranging from Turkey to Jordan (even the Assad regime or Iran), to deal with intricate challenges.

This is not surprising. While ISIS presents a challenge to the regional security and may potentially emerge as a breeding ground for terrorists with intentions to strike the West, the actual and potential costs of putting U.S. troops on the ground would be tremendous, not to mention a difficult sell to the domestic audiences in the aftermath of Afghanistan and Iraq.

What is surprising is that the Western analysts and policy makers, even after so many experiences gone bad, keep convincing themselves that relying on and/or empowering local actors can help the United States and its allies avoid costly options, while at the same time solving the problem in the way they want it solved.

Take, for example, Afghanistan. As any fan of Sylvester Stallone’s Rambo 3 can tell us, the United States empowered the local “freedom fighters” in their struggle against the Soviet Union and then watched them emerge as the Taliban. To defeat the Taliban, the United States made heavy use of the so-called Northern Alliance, which in turn did as much damage as good to the long-term stability of the country. (By the way, why the Taliban is no longer running the country, it is still alive and kicking.)

In Iraq, the United States was able to energize the Sunni tribes, the so-called “Sons of Iraq,” in its struggle with Al Qaeda’s Iraqi branch (AQI), only to see AQI evolve into something much more dangerous: ISIS, an organization that now draws its strength from numerous Sunni tribes that fought AQI only a few years ago.

What about Libya, or even pre-ISIS Syria? Providing material and air support was often applauded as a “smart” strategy that would lead to quick and cheap victories, only to turn sour down the road, usually with unintended consequences.

Two questions arise. First, why do policy makers and analysts, time after time, succeed in convincing themselves what usually does not work out will actually work out this time? Second, more importantly, why does fighting through auxiliaries usually fail?

The answer to the first question is three-fold. First, faced with the difficult choice of embarking a costly and risky strategy, policy makers and analysts want to believe that there is a cheap solution to be worked through local actors. Second, there is the discourse of “this matters more to the local actors, so they should bear the burden.” Third, this “cheap” method to deal with an intractable challenge usually appears to work in the short run.

So, why do such arrangements usually lead to long-term strategic failures? There are three answers, each following from the misleading assumptions strategists make to convince themselves and others that fighting through intermediaries is the way to go.

First, projecting military power can in fact be a cheap and effective method, but usually for imperial governance, not for the kind of state-building exercises that are often necessitated by the military interventions targeting insurgencies and terrorists. Second, local actors have not only their own incentives, but also conflicts amongst each other, a situation that then leads to outcomes not in line with the interests of the “donor” states. Third, fighting through auxiliaries causes a sudden and significant change in the balance of power in the relevant regions by empowering some local actors at the expense of others, setting the stage for long-term instability.

The first point is rarely taken into consideration. In the past, empires from the Ottomans to the British Empire effectively projected power and governed vast spaces by drawing on local intermediaries for centuries. They were able to do so for three reasons. First, before the spread of industrialization and the information revolution, it was simply easier to do so. Second, formal empires of the past were not ashamed of acting in imperial terms and committed centrally funded military forces to the areas they ruled for the long haul, which helped them keep rebellions and intracommunal violence in check. Third, they were not trying to build modern states; such empires only wanted to rule on the cheap.

Ruling on the cheap is not what the United States and its allies want. They simply want to degrade and destroy an unrelenting enemy—in this case ISIS—and move on. The only problem with such an objective is that ISIS is a problem that cannot easily be divorced from the regional crisis that gave birth to it. ISIS was born out of civil war in Syria and failing state institutions in Iraq, not to mention the associated sectarian tensions. Dealing with the ISIS crisis requires not only destroying ISIS, but also addressing state failure in these two states, which is not a cheap task. Destroy ISIS today without addressing the crisis that has been empowering it and tomorrow you will be facing a new, and probably more “evolved,” enemy that feeds off of the same crisis. The evolution of AQI into ISIS is a case in point.

Put simply, projecting power through local auxiliaries can be an effective method to extend and sustain one’s imperial reach. But if one does not intend (or have the will) to act as an imperial power, it does not make much sense. The short-term results in the military domain and the following euphoria, assuming the enemy is destroyed, may deceive spectators into thinking that such a strategy actually works. But without addressing the “politics” of the ISIS crisis, what appears to be victory in the short term will set the stage for the next crisis in the long term.

Of course, as pessimistic as it sounds, the above analysis assumes that the military, if not political, ends (say, a decisive military victory against ISIS) can be achieved through auxiliaries. This is in fact an optimistic assumption. The case of ISIS should remind us that even forming an “effective” coalition of local forces itself is an enormous challenge. In particular, the second reason why fighting through auxiliaries usually does not work is the mismatch between the interests of the donor states and the auxiliaries, not to mention the conflicts of interest among the local actors. This mismatch and clash of interests, in turn, can lead to two outcomes: either the resulting coalition is deemed ineffective, or it fails to emerge in the first place.

For example, take Turkey. There is increasing pressure on Ankara to take a more active position over ISIS. However, Turkey’s interests are not necessarily in line with such a position. First, ISIS does not pose a direct threat to Turkey. In fact, if Turkey puts boots on the ground against ISIS, it will make itself a prime (and very vulnerable) target for terrorist attacks from ISIS. Second, Ankara stipulates the removal of the Assad regime as a condition for its more active participation. Third, Turkey is categorically against the empowerment of a Kurdish contingency in northern Syria and is worried about the rising influence of Iran in the region.

Apply the same exercise to the other potential local actors and you will see that it is not all that easy to summon an effective fighting force to tackle ISIS. So, what about the discourse of “the ISIS threat matters more to the local actors, so they should take care of it themselves, perhaps with our support,” which heroically assumes that the regional players “have to” do something about ISIS? The answer, ironically, is hidden in the question: The local actors may not share the West’s concerns and will tackle ISIS in the way (and to the extent) that fits their interests.

This ties into the third problem with fighting through auxiliaries. It might in fact be possible to motivate some local players by drastically empowering them. But such policies usually lead to a sudden and dramatic shift in the balance of power in the region, leading to long-term instability and even conflict (sometimes between actors that may be potential allies to the West, but adversaries or competitors to each other). Surprisingly, while international relations experts are concerned about the impacts of changing balances of power among great powers on world politics, they rarely consider how sudden shifts in regional balances of power can lead to instability and conflict.

Take the example of the Kurdish group YPG, which is now unanimously portrayed as the most willing and capable fighting force against ISIS. YPG, in return, is attracting material and air support from the United States, which amplifies the military capabilities of the Syrian Kurds, who have organic ties to the Kurdish Workers’ Party (PKK), an insurgent group that fought Turkey for over three decades and is formally considered a terrorist organization by United States.

The rise of YPG, however, is rarely put into perspective. True, YPG is fighting ISIS to protect the Syrian Kurds, but the organization is also pushing for a nationalist agenda, and both YPG and PKK are doing their best to take advantage of their newfound popularity and appeal in the Western world. Now, there is nothing wrong with this endeavor. But thinking strategically entails considering options in the context of the reactions of all relevant actors to particular developments. The empowerment of YPG is also shifting the balances of power in the region, with three potential consequences.