Why the Flames of White Supremacy are Still Raging 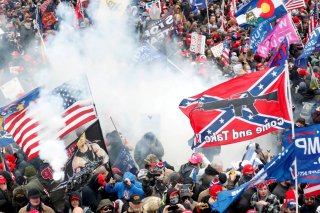 Riot, attempted coup, terrorist insurrection—whatever it was the scenes of the Capitol building engulfed by a mob of people (each with varying degrees of attachment to reality) was certainly traumatic, both for those inside the building and those watching this act of desecration unfold. But the trauma and visceral shock of events like these also tend to unleash what Atlantic journalist Graeme Wood dubbed the “moronic inferno” of online commentary.

Before that, British literary titan Martin Amis pondered if the term “moronic inferno” might describe a future in which America’s dream-like state transformed from metaphor into reality—the only reality. Well, American unreality just erupted into the street with the Capitol siege, as Viking helmets and beer bellies descended upon a sacred symbol of American democracy to halt the stolen election of their paranoid imaginations.

The civilizational retreat into our living rooms to escape plague and pestilence has degraded the faltering boundaries between digital, imaginary, and the real world like never before, challenging all of us to maintain perspective and a grip on baseline reality. No surprise then, that some commentary in response to the disgraceful spectacle of unreality at the Capitol has created an alternate reality of its own making. But like the eruption of the paranoid and fantastical into the streets that occurred on Jan. 6, a moral panic, which was largely confined to the digital realm until now, risks real-world policy consequences in response to the complex challenge of the far-right.

To identify a moral panic is not to deny the reality of its source. The far-right and white supremacists are, after all, real. But a moral panic that inadvertently occluded more than it reveals can also develop. So let’s take a quick look at the anatomy of a moral panic, according to Stanley Cohen’s seminal work:

Societies appear to be subject, every now and then, to periods of moral panic. A condition, episode, person or group of persons emerges to become defined as a threat to societal values and interests, its nature is presented in a stylized and stereotypical fashion by the mass media; the moral barricades are manned by editors, bishops, politicians and other right-thinking people; socially accredited experts pronounce their diagnoses and solutions.

With America’s ongoing reckoning over racism [condition] the Capitol siege [episode] and the defenestration of former President Donald Trump [person], a parade of talking heads and socially accredited experts have taken to the media and social media to propose solutions to combat America’s “enemy within” the white supremacists and their threat to the established moral order.

There’s been much talk of “healing” of late, and after four years of Trump, America desperately needs someone to take the heat out, but the social and professional incentives all point in the other direction. Producing the most extreme and incendiary possible interpretation of events can serve to signal ideological distance from the White supremacists, while to call for cool heads and restraint is to risk being eyed with suspicion or in ideological proximity.

It’s no surprise then that a frenzy of escalatory position-taking has produced proposals ranging from the authoritarian (knocking Fox News off-air) to the outright disastrous (launching a new domestic War on Terror). Like the term “class enemy,” white supremacist is becoming a categorization seemingly without boundary, deployed against political opponents and for increasingly minor infractions with astonishing insouciance.

Right now, white supremacist—or “terrorist”—charges can be leveled against anyone from actual race haters to ordinary Republicans and intellectual opponents of Critical Race Theory, to critics of the latest liberal shibboleths. With American political polarization approaching levels of sectarian hatred found in the Balkans, making half the electorate feel the target of a domestic War on Terror is, quite simply, inching the country closer and closer towards the precipice.

Then there are the actual extremist groups themselves. At times, these ideologies defy or challenge conventional categorization along the left-right political axis, while groups like the Proud Boys attract non-white members—yet all are flattened under the simplistic and crushing lens of the white supremacy hunt.

Mental contortions are made to explain why a Hispanic would join a white supremacist group, while no one seems willing to ask if indeed white supremacist is the most appropriate lens. Maybe it is, but the efforts to understand these apparent contradictions and complexities seem few and far between.

At this point, an American might well be justified to tell me—a Brit—to butt out, but the American planet’s gravitational pull risks consuming international understanding of the far-right as well. A Foreign Policy piece in the wake of the Capitol called for a global campaign against the far-right, linking the United States, New Zealand, Hungary, and Brazil in its opening salvo, but the far-right exists in different places for different reasons and believes in different things. Europe’s various populists, identitarians, and reactionaries are not simply shades of the same American threat. To lump all of these disparate groups and movements together, especially as extensions of the white supremacy moral panic, is bad analysis. And bad analysis will lead to worse solutions.

Liam Duffy is a counterterrorism professional based in the United Kingdom and an adviser for the Counter Extremism Project. He tweets at @LiamSD12.