Why France's Anger at AUKUS Should Be Taken Seriously 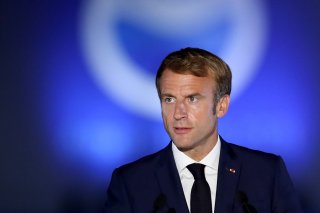 The past days have shown it: the French are not happy about being squeezed out of a submarine deal with Australia, their “contract of the century”—a collateral loss stemming from the larger AUKUS deal signed last week between Australia, the UK, and the United States. For the first time in their bilateral relations, Paris has called back its ambassador to the United States “for consultations,” and the language used by diplomats, ministers, and think-tankers on traditional and social media over the past few days was anything but diplomatic. And yet, calls to reboot a sort of French neo-Gaullism 2.0 and for re-calibrating Paris (and Europe’s) relationship with China should be taken seriously—for the French are really angry, and have just enough nuisance potential to make it hard for America to capitalize on its diplomatic victory in both Europe and the Pacific.

Not that the French are right to play the outraged, innocent victim. It was a secret to nobody (apart from the Elysée and the French Foreign Ministry apparently) that the historic order of twelve French submarines by the Australian navy was running into difficulties. France’s second newspaper of record, Le Figaro had actually run an article on how Australia was actively searching for a plan B in June this year. Everyone knew it, the costs were rising out of control, the contract had become an internal political issue in Australia and of course, the security conundrum for Canberra had been changing rapidly over the past few months, with China’s bullying necessitating a much closer relationship to Washington. All these factors should have raised alarm bells in Paris, and it is clear that they were not taken seriously enough by French politicians.

More importantly, a major mistake in Paris is to make a scandal out of this while ignoring the bigger picture, which is that the larger AUKUS alliance is first and foremost a blow to Beijing and its current aggressive foreign policy. Even if their approach is much softer on the subject, France and the European Union are equally worried about China’s assertiveness and should have taken this into consideration before alienating partners (including in Europe) over what was only one part of a much larger deal.

The French might be overplaying their hand, but they are, however, enraged for good reasons. For one, the manner in which their deal with Australia was dismissed was careless at best. France holds a legitimate grudge against its Australian partners for the way it's been treated (with foreseeable consequences on the trade deal currently under negotiations with the EU) and against the United States for complete disregard to its interests (here again, with foreseeable consequences on the way the next NATO summit will work out next year in Madrid). While France may not be a world power, and certainly less important for the Indo-Pacific than Australia, its potential of nuisance is real in Europe. It is a resident power in the Pacific, with 1.6 million Frenchmen living in overseas territories like New Caledonia, French Polynesia, and Wallis and Futuna, and a very large economic zone that makes three-quarters of France’s total, making it the second-largest in the World. France is also America’s best bet if it wants the EU to play a role as an ally in the region.

Of course, from an American perspective, it is easy to dismiss one commercial contract as hardly a big deal. But it mattered greatly to the French, for several reasons. First, the deal was indeed extremely important for France’s armament industry. This helps keep the French Army’s high standards and as a result, helps America fight Jihadists in the Sahel without putting troops on the ground. It also allows France to bring much added value to the Indo-Pacific. In May this year a French flotilla was sent to Kyushu for common maneuvers with Japanese, Australian, and U.S. allies. Squeezing the French out of what was dubbed in France as “the contract of the century” is putting whole parts of the French defense industry in jeopardy, and more importantly, it gives arguments to those in Paris who have always been saying that the Anglos are not to be trusted.

In fact, one of the consequences of this French debacle is that it has strengthened the hand of the anti-American Neo-Gaullists in the French Ministry of Foreign Affairs. To be sure, after a short period of estrangement in 2005-2010, these self-proclaimed “realists” had taken the ascendant over the past decade, turning Emmanuel Marcon’s original Atlanticist approach into a much more ambivalent world view. The Neo-Gaullists’ intentions are clear: to keep their distance from the Atlantic alliance. They see, not just France, but also Europe as having more interest in balancing East and West rather than aligning itself with the West. It would be wrong to dismiss this as a uniquely French vanity: the diplomatic school of thought is actually part of a much larger (and rising) “continentalist” movement inside continental European elites. Brexit and other recent estrangements between Anglos and Euros in the past years have strengthened their hand not only in Paris but also in Berlin, Budapest, and Brussels, among others.

One of the continentalists’ main arguments is that whatever the nature of the relationship, Americans cannot be trusted because their alliances always have double standards. At the top are the “Anglo-Saxon” countries, leaving the others as second-class members of the Alliance. While the Anglos will get away with backroom deals and messy behavior, the others will systematically be asked to get in line and bear the responsibility for the Anglos’ mistakes. With fears over a new refugee crisis over Afghanistan still high around Europe, the argument is more potent than one would think, even more so as it does not come out of nowhere. In fact, it has been a constant argument developed by opponents of the Atlantic Alliance in the past century: Nazi Germany used actually scored points with French elites in the early 1940s over this narrative (notably after the sinking of the French fleet in Mers-el-Kebir). The Soviet Union also used the argument to stir trouble in the relationship, notably in Italy, Germany, and France, and for a while, their propaganda was quite successful, notably in the late 1960s and 1970s. There is little doubt that both Russia and China will have an interest in developing that narrative again towards European elites to sow distrust between allies—unfortunately, many events have come over the past few years to fuel it.

In the AUKUS alliance, the “K” does not stand for Korea. The risk for the United States is that its enemies will use this argument of an “Anglo-club only” to weaken America’s other partnerships in Europe or in the Indo-Pacific. This is why America needs to take France’s theatrical public breakdown seriously and find ways to avoid transforming a major strategic victory into a long-term blunder that will estrange other key partners in the long term.

Washington has several options at its disposal to defuse the crisis, even though it is now certain that the French will at least for a while be difficult to deal with. The first one is to try and better include Paris into America’s co-operation system in the Indo-Pacific. France may cherish its independence, but as a resident Indo-Pacific nation, it is just as worried about China’s military build-up in the region as the others. And although an offer to join the AUKUS alliance would be both unrealistic and counterproductive at this stage, it might make sense to formalize Paris’s participation in the Quad, a more informal (but no less crucial) alliance for Indo-Pacific security. It currently includes Japan and India as well as the United States and Australia. Inviting Paris would have the merit of propping up a larger system of co-operation in the region, with a formal AUKUS alliance complementing and strengthening a more informal but no less important enlarged Quad to protect the current Indo-Pacific security framework. Paris, which is less likely to turn into a formal alliance, would fit better into a security network with India (who for historical reasons will not entangle itself into a formal alliance) and Japan, and could bring much added value to it, particularly on the defense side.

But beyond the Pacific President Joe Biden should also sit down with French president Emmanuel Macron and talk about Europe’s security framework. The United States has thus far dismissed all talks about European “strategic autonomy” as either nonsensical or dangerous deviations from the Atlantic doxa, while at the same time railing about Europeans not taking enough responsibilities for ensuring their own defense. It might actually be more constructive to publicly support France’s calls for strategic autonomy, on the condition that it remains an autonomy “to do” rather than autonomy “from”—meaning a united build-up of capacity designed to strengthen NATO. This would not only be a way to defuse a larger crisis of confidence that has been brewing for a while between the United States and Europe. It would also put pressure on the Europeans to actually focus on the operational aspect of strategic autonomy rather than the frustrations over their alliance. To keep ensure that strategic autonomy remains in check, it might be more useful to “dare” the Europeans to achieve inter-operability (more easily done with U.S. support) than to tell them it is a stupid idea.