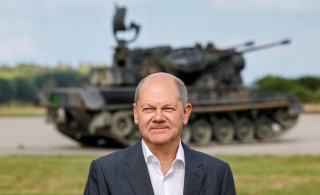 Stephen Szabo’s provocative article in The National Interest presents what we as former intelligence analysts would characterize as a “what if” or “low probability/high impact” scenario. “What if” exercises are useful to challenge the conventional wisdom, if only to demonstrate that the underlying conditions for current assessments remain solid. In this case, we believe that the counterargument for Germany remaining a non-nuclear ally within NATO is much stronger than the case for Germany exiting the Nuclear Non-proliferation Treaty (NPT) or even seriously considering developing its own nuclear capability.

Szabo’s argument rests on several factors and questionable assumptions that he and a few German commentators cite. First, Russia has proven to be a much less capable conventional military threat and now must rely more on its nuclear forces. Second, that the entire European security architecture is now dramatically changed for the worse and U.S. security guarantees are untrustworthy. And third, that Vladimir Putin’s invasion of Ukraine has thrown out all previous German commitments made regarding its rejection of nuclear weapons

We find these arguments unconvincing and overdrawn. For political, military, and economic reasons, there’s a stronger case for Germany to avoid any serious moves toward developing its own nuclear deterrent. While debates over Germany’s nuclear status regularly occur whenever there is an apparent shift in European or American attitudes toward nuclear deterrence, there are simply too many obstacles to Germany taking such a provocative step.

International and Domestic Barriers Should Hold

Both international and domestic political constraints on Berlin remain essentially in place. Internationally, the West is committed to preserving the NPT, given concerns about North Korea and Iran’s intent to develop such weapons. As an NPT signatory, Germany’s decision to exit the treaty would essentially destroy long-standing Western solidarity and encourage additional nuclear proliferation. As most scholars of German politics have recognized, post-1945 Germany has felt most secure when it placed its foreign and security policies squarely within a broader Western security structure. Germany’s military, for example, is embedded into the NATO military structure—a unique condition made obligatory for West Germany to be rearmed and join the alliance in 1955. And, its conventional forces are ultimately under the control of NATO’s supreme allied commander, always a senior U.S. military leader. So, Germany would either have to place its nuclear weapons under U.S./NATO control or exit the alliance itself—the latter of which is more likely to undermine Europe’s security architecture than anything Putin has done. Moreover, Russia’s invasion of Ukraine may have shaken Europe’s security environment, but it has solidified the transatlantic alliance and its resolve, not weakened it.

Domestically, the politics of nuclear weapons has not changed as much as Szabo suggests. That some Christian Democratic security experts believe that there needs to be a debate is not new. Former President Donald Trump’s threats to soften the U.S. commitment to the NATO treaty’s Article V on collective defense did spawn speculation. But in 2021, the current German coalition government parties were debating the merits of exiting NATO’s nuclear sharing and some coalition leaders wanted to press the United States to remove the few remaining U.S. nuclear weapons in Germany in line with German public opinion. Fast forward to post-Ukraine invasion, and public opinion had shifted dramatically in favor of retaining U.S. weapons. This does not suggest that Germans are worried about a weakened U.S. commitment or a hankering for its own forces. Needless to say, the public’s attitudes are changeable depending on the perception of the nuclear risks that Berlin faces. The Biden administration’s forceful pledges to defend “every inch” of NATO territory and its sizable arms transfers to a non-NATO member like Ukraine suggest a comforted German public.

The argument that Germany might skirt the provocative move toward an independent nuclear force by pressing the French to extend their nuclear deterrence to Germany seems to us a bridge too far. The French Force de frappe has long been seen as an independent nuclear force designed to retain Paris’s freedom of action as well as complicate Moscow’s own nuclear targeting plans. In fact, flagging German confidence in the United States suggested by proponents of a German or European nuclear option is not borne out by recent opinion polls; in June 2022, strong majorities in most countries—including Germany—viewed the United States as a reliable partner. At this juncture, Berlin has no reason to question Washington’s reliability.

The technical, economic, and military challenges of creating and maintaining a viable nuclear capability add to the political arguments against a German nuclear program.

To be sure, Germany would have several options to create fissionable material for warheads—all of which are technically feasible. Berlin could retain its civilian nuclear reactors (extended for now during the Ukraine War) and use them to produce plutonium for warheads. This path would require substantial plutonium reprocessing capabilities, a task well within the country’s capability. Using commercial reactors would be the least expensive and fastest option for Berlin. Alternatively, Germany could build devoted plutonium-producing reactors at a cost of billions of dollars. This more expensive route would delink the commercial and military programs but provide a rallying point against the effort and become one of the highest priority Russian targets for technical (including cyber sabotage) and military countermeasures.

Berlin could instead opt for uranium-based weapons and create stocks of weapons-grade Uranium-235 through centrifuge enrichment. Building cascades of centrifuges is a major, lengthy, and costly industrial enterprise, but again well within Berlin’s technical capability. Turning weapons-grade Plutonium-239 or Uranium-235 into viable warheads is not trivial. However, the greater challenge for Berlin would arise as it tries to convert a stockpile of nuclear warheads into a credible nuclear strike capability. The research, development, production, and force integration efforts would cost many billions of euros and take years if not a decade or more.

Three days after Russia’s attack on Ukraine, Chancellor Olaf Scholz announced an enormous rearmament program, including spending an additional 100 billion euros, or roughly twice the country’s annual defense budget. The weapon systems proposed for purchase, such as F-35 fighter jets, along with recapitalizing a military that has been short-changed for many years, will consume this plus-up. A nuclear program on roughly the same scale as France’s might cost an additional several billion euros per year, after much larger initial R&D and procurement costs. As the French and British see with their aging delivery systems, replacing submarines and missiles is shockingly expensive.

No German nuclear capability makes military sense, or can be rationally constructed, without a clear concept of its fundamental purpose. In the most general sense, nuclear weapons can be used to threaten a potential enemy’s warfighting capabilities (its own nuclear or conventional strike capabilities, such as missiles and aircraft bases, army garrisons, military ports, and command and control facilities) or its civilians (populations, economic centers, and infrastructure). In general, the former—counter-force capabilities—are intended to limit the damage an enemy can inflict in its own strike and reduce its conventional capabilities. The latter—counter-value capabilities—are credible only as brutal punishment for aggression—and of necessity hold civilians at risk.

A German counter-force capability against Russia would demand a colossal expansion of its military and development of new, expensive, and technically challenging systems. The potential Russian target set of bases and forces is vast and distant. Although aircraft could strike some targets as a signal of resolve early in an escalatory phase, such delivery systems would not provide the near-certainty of delivery, speed, and accuracy required for a counter-force posture to deter enemy actions.

A counter-value capability would be less demanding, but not trivial. Aircraft might suffice, but unless used early in a conflict—defeating the very purpose of this capability as a fundamental deterrent—German planners would have to assume that Russia would effectively strike German airbases during a conventional phase of a war.

There is a commonly held perception that the mere possession of nuclear weapons generates deterrence. Military planners and analysts recognize that numbers and types of warheads, delivery systems, targeting capabilities, command and control, employment doctrine, training, warning and alert systems, and many other components of a nuclear capability together create a viable nuclear posture. But all of these must be considered in the context of potential opponents and their possible counteractions.

Berlin would almost certainly have to develop a submarine-based missile-borne nuclear capability to create any semblance of credible deterrence. An alternative land-based system would invite Russian planners to prepare for terribly destructive, preemptive nuclear strikes for their own damage-limitation approach. It is hard to imagine that the German populace would find such a possibility, fueled by Berlin’s own actions, acceptable. In contrast, submarine-based missiles would be more survivable and still have remarkable accuracy. However, the scale of Russian target sets—their number, character, and distances—would call for a very large submarine force for a counter-force posture. Submarines in port are tempting targets and would provide little more value than aircraft on bases. Submarines and their crews demand rotations for rest and refit, and countries have found that they can keep perhaps one-third of their fleet at sea at any time. Once a planner does the math—the number of targets, the number of missiles to raise the confidence of destruction, the number of missiles per submarine—the total fleet size soars. Moreover, command and control arrangements to guarantee that weapons would not be used unless ordered by the government, and would be used if ordered, represents a key vulnerability. Russian planners would be foolish not to devote efforts to hinder, delay, corrupt, or defeat German nuclear use authorization. These could take extremely destructive forms, including “decapitation” strikes to eliminate government and military leaders.