Why Guinea Matters to America 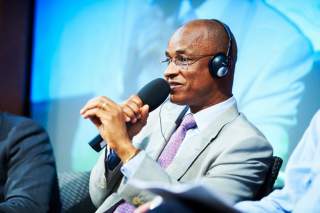 Blessed with abundant natural resources, Guineans should live in the most prosperous country in West Africa. But my country remains stuck in extreme poverty because of a half century of authoritarian governments, often inspired by the teachings of Karl Marx.

During this long period when Guineans struggled, fortunately there was good news and some hope. My country has been a bulwark of stability in West Africa’s so-called “arc of crisis.” So far, Guineans have been spared the tragic and destructive civil wars found in neighboring Liberia, Sierra Leone, Cote d’Ivoire, and Guinea-Bissau. Yet this could change. While wars around us have abated, economic stagnation, heightened tribalism, and the unbridled spread of terrorism throughout Africa could undermine Guinea’s cherished stability.

There is a way forward for my country to build on its stable past and avoid civil conflict and terrorism spreading to us. My vision is for a free, democratic, prosperous Guinea based on ethnic inclusiveness, the rule of law, free-market economics, and the effective management of the country’s vast mineral, agricultural, water, and human resources. I foresee a proud Guinea fully integrated into the West African economy and making a positive contribution to the world community.

This modern, forward-looking, vision stands in stark contrast to that of our incumbent President, Alpha Condé, a lifelong socialist. While the rest of the world has abandoned Marxist theories, President Condé embraces them. And like all diehard socialists, he has failed to achieve any notable economic or social progress since becoming president five years ago.

President Condé’s job has admittedly not been easy. He inherited a country that experienced brutal totalitarian rule from independence in 1958 to 1984, then paternalistic, autocratic rule until 2008, followed by a military transitional government until 2010.  There is no reason my country should be trapped by this history. Yet President Condé and his government have failed to rise above it. Guinea remains a case of arrested development and failed hopes.

Without drastic and immediate changes at the top levels of government, Guinea could become Africa’s next failed state, a fate my fellow citizens do not deserve. Strangely, President Condé has sleepwalked through his time in office. He has achieved nothing for the Guinean people. His decades-long dream of creating a socialist state has turned into a nightmare for my country. The list of his failures is long. He has failed, for example, to attract foreign investment, most notably in Guinea’s mining sector, which boasts the largest deposits of high-grade bauxite and iron ore on the planet. He has refused to fight corruption. His opaque economic decisions and promotion of his family’s and clan’s narrow interests have convinced many foreign businesses that investment in Guinea is too risky. According to the World Bank, the business climate in Guinea ranks near the bottom at 169th out of 189 countries.

With no record to run on after almost five years in power, President Condé is desperate to hold on to power. He is trying to rig the electoral process again, as in 2010. True to his Marxist roots, he sees presidential elections as a distraction, not a means for free democratic expression. His approach is crude. His leftwing party now dominates the so-called National Independent Election Commission. Without constitutional authority, he replaced local elected officials with political appointees, who will be responsible for organizing the presidential election at the precinct level. He has also reneged on an earlier agreement between the government and opposition to hold fresh local elections before the presidential election. If his unelected appointees remain in office at the local level, the presidential election will not be credible.

President Condé’s game is clear: he intends to run roughshod over the democratic process to preserve power for himself and the narrow interests of those around him. This is a dangerous, potentially destabilizing strategy detrimental to the interests of Guineans and West Africans. To act in ways that could destroy your country just to hold on to power is not the behavior of a patriot.

Guinea cannot survive another electoral debacle. If, and I pray to God that it does not happen, Guinea descends into violent turmoil—something that no Guinean wishes—it could destabilize the neighboring countries of West Africa and reverse the recent progress our region has made. Moreover, acute instability and continued poverty in Guinea would make the country more vulnerable to the brand of terrorism that has infected neighboring Mali, Nigeria, and much of the Sahel region.

These potential threats should be of immediate concern to the United States, Europe and the international community at large. The Fragile States Index, created by the Fund for Peace and published by Foreign Policy magazine, ranks Guinea as the 10th most fragile state in the world, behind Syria but more fragile than Iraq, Libya, or the Democratic Republic of the Congo. A negative outcome is not preordained. As a former prime minister, I am convinced that there can be bright future for Guinea, a future where Guineans are free to realize the full potential of their country.

My fellow citizens deserve free, fair, and transparent elections at all levels of government. They also deserve a president who puts the interests of all Guineans first, irrespective of their region, ethnic identity, or station in life. Guinea does not belong in a Marxist museum. My country deserves a president who will govern openly, uphold and personally obey the rule of law, and reduce corruption. Only then can Guineans realize their full potential.

As a vice president of the Liberal International, the free-market’s answer to Alpha Condé’s Socialist International, and as an economist by profession, I know that the private sector, working within a stable legal framework, can unleash Guinea’s great, unrealized potential. The private sector—not the state—is best motor for the creation of wealth and jobs in Guinea. As we approach to the presidential election in October, I ask my fellow citizens and the larger international community, why must Guineans subsist without electricity despite the country’s vast hydroelectric potential? Why do Guineans go hungry despite the country’s proven agricultural potential? Why do the coffers of the Republic of Guinea and most households remain empty despite the country’s enormous, untapped mineral wealth?

The answer is not Ebola, as President Condé would like the world to believe. These problems predate the tragic epidemic. We cannot allow President Condé to hide behind the Ebola virus.  While many African economies are achieving impressive growth, Guinea’s growth rate in 2013, that is, before Ebola, was only 2.3 percent, an anemic rate that was more than offset by a population growth rate of 3.1 percent. Under Alpha Condé, Guineans are getting poorer day by day.

My fellow Guineans deserve a real choice in October: a vigorous alternative to a Socialist president stuck in the past, clinging to an outdated ideology, enriching himself and his entourage at the expense of everyone else. And while all politics are local, it is also in the strategic interest of Africa, the United States and Europe, and the larger international community to guarantee that all Guineans have the same free, fair, and transparent elections enjoyed by so many in the world today.

Cellou Dalein Diallo is a former former Prime Minister of Guinea and the President of the Union of Democratic Forces of Guinea.