Why Has America Overlooked Oman? 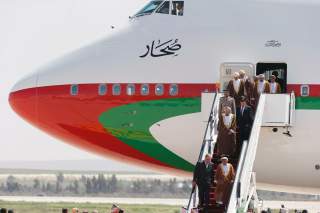 The Sultanate of Oman, bordering Saudi Arabia to the north and less than fifty miles across the Strait of Hormuz from Iran, has long been seen as a minor player in regional affairs. With low oil prices leading to economic slumps and repeated budget deficits, it could be seen as another poor Arab state with little potential for exerting influence outside of its borders. But with a long-stable monarchy under the now-ailing Sultan Qaboos, a quite moderate third variant of Islam known as Ibadism, and a strategic location past which forty percent of the world’s oil passes, Oman plays an outsized role in balancing the great powers in the region. It also remarkably remains one of few countries in the world that has not been impacted by terrorism, with one study finding not a single Omani fighting alongside ISIS, and another finding terrorism to have no measurable impact within Oman, the only country in the Middle East to receive such a rating. As rising and existing powers within and outside the Middle East seek to project power in the region, Oman stands as an ideal partner for those seeking a stable ally in an uncertain time.

During the Obama administration, Oman played a critical role in securing American interests in the Middle East. Between securing the release of American citizens from Iran and Houthi rebels in Yemen, the country has been a fruitful broker of American diplomacy in areas where traditional lines of communication are unavailable. A free-trade agreement, cooperation on counterterrorism, military exercises and cultural exchanges all were completed or expanded during the Obama years and provided the sultanate with increased visibility and influence in the region, strengthening a strategic U.S. partner. Most importantly, Oman’s role in facilitating the Iran nuclear negotiations, starting secretly in 2013 and being completed in 2015, proved the level of trust that the U.S. government had in its ally.

But it seems that the Trump administration may not see this relationship as bearing so much fruit. Over a year into his term and President Trump has only conducted one phone call with Sultan Qaboos despite having met with leaders of the rest of the GCC. Allegations that Oman has been complicit in arms smuggling from Iran to Houthi rebels in Yemen have brought increased pressure from the United States and its Sunni Arab allies, straining relations. It may be the case that Oman’s productive connections to Iran, which were once regarded as an asset to the West, have left a sour taste in the president’s mouth. Trump increasingly seems to want to make good on his campaign promises, and as free trade and the Iran deal both represent Obama-era policy successes that he wants to degrade or eliminate, these major ties may actually work counter to continued American cooperation with Oman.

But such sentiments have not precluded other nations from courting the sultan. Sizeable Shia and Sunni populations live peacefully alongside the Ibadi Muslims in Oman under an official and practiced policy of religious freedom that is uncommon in many other Islamic states. This has lead both Saudi Arabia and Iran to attempt to influence the country’s trajectory in their ongoing competition for regional influence. Despite being a member of the Saudi-led Gulf Cooperation Council, Oman maintains a policy of nonalignment and noninterference, refusing to follow Saudi Arabia into conflicts in Yemen and against Qatar. In both cases, Oman has sustained maintaining and even deepened its diplomatic relations with all parties involved and contributes no military strength to the Saudi-Emirati coalition. It balances involvement in the majority-Sunni Islamic Military Alliance (also known as the Islamic Military Counter Terrorism Coalition) with economic relationships with Iran, including construction of a natural gas pipeline beneath the Strait of Hormuz, which Oman views as vital to its national interests as oil prices continue to remain low.

This pipeline bears particular importance because it is tied to a project also under construction that will connect Iran to India, another player seeking to secure its interests in the region. With significant investment in the port of Duqm and the special economic zone surrounding it, hundreds of thousands of Indians working in Oman, and bilateral agreements on trade, technology and military exercises, India is working to secure a stable partner along its route to distribute goods to Europe and other emerging markets. And where India invests, China is often found, given their similar ambitions for growth. China intends to invest billions of dollars into the Omani desert near Duqm where a new industrial complex will employ Omanis, and construct storage facilities, refineries, and other transportation infrastructure to connect another link in the One Belt One Road Initiative. The attention of these two massive economies is an enormous boon to an Omani economy that has struggled to diversify with little international investment, but it does not constitute the only great powers seeking to court the sultan’s favor. Although Russia’s engagement in Syria at first upset Oman’s efforts to negotiate a settlement to the conflict, now the two nations are exploring possible cooperation in an effort to balance the influence that various international actors will have in territory once controlled by the Islamic State.

As the only neutral party capable of navigating the cultural, diplomatic and religious complexities within both the Syrian and Yemeni conflicts, it would be a mistake to sideline such an important strategic partnership. Other nations haven’t been so foolish; they have been expanding links to the country at a time when American investment in the region appears to have declined while remaining unconditionally supportive of Saudi Arabia. Wise political and diplomatic policy would elevate Omani voices in their pursuit to negotiate settlements among the recognized warring parties, especially since Saudi Arabia and its allies cut diplomatic ties with Iran in 2016 and have yet to reinstate them. As the Sultan’s diagnosis of terminal cancer raises concerns about a stable political transition after his death, American support for the continuation of Omani neutrality could be essential for keeping the flow of oil out of the Persian Gulf from being interrupted, as well as maintaining a secure connection to Iran for future discussions—if they are deemed necessary. Despite the fact that the Trump administration reserves antipathy for anything that smells of Iran, the United States would be remiss in damaging relations with this valuable player in the complex Middle East.

Jacob Eishen is an intern with the Center for the National Interest's Regional Security program, where he works on projects relating to Middle Eastern affairs and climate security. He received his master's and bachelor's degrees from Miami University, where he wrote his thesis on individual disengagement with international terrorist organizations.