Why Has Trump Joined the Interventionists in a Crusade to Dictate the Future of the Middle East? 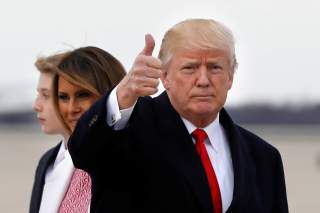 With Mike Pompeo replacing Rex Tillerson at the State Department and John Bolton taking over H. R. McMaster’s post as national security advisor, the nation has moved a step closer toward war. Both Pompeo and Bolton have stated publicly they favor a “pre-emptive war” to replace the Mullahs in Tehran. They have been encouraged by hawks who have rationalized it with a cascade of articles, blogs, position papers and media appearances. Since the kinetic proclivities of both men clash with candidate Trump’s claim that the invasion of Iraq was a tragic mistake, why has President Trump reversed course on a matter that won him favor among millions of Americans in the 2016 presidential race?

One plausible answer is that James Mattis, H. R. McMaster, and John Kelley urged him to deploy more troops to the Middle East to crush ISIS, to depose Assad’s regime in Syria, and to force the Taliban to the negotiating table in Afghanistan. They too have displayed keen enmity toward Iran fighters responsible for the deaths of many Americans. At the same time, they have endorsed the Joint Comprehensive Plan of Action (JCPOA) that denies Iran nuclear weapons for at least ten years—if not forever. They acknowledge its flaws but given Iran’s compliance with the JCPOA oppose President Trump’s promise to kill the deal in May.

Pompeo and Bolton proclaim the time has come to scrap the JCPOA, to destroy Iran’s nuclear installations and to expel the radical Mullahs from power. Barack Obama conceded Iran is the world’s leading supporter of international terrorism but like Bush and Clinton preceding him, he did nothing to destroy that evil threat to our Arab and Israeli allies—and possibly our homeland as well. Now with two hawks at his side, President Trump can end the threat of the Iranian jihadists once and for all. To pursue further negotiations with them is senseless; we should follow the advice of Israeli Prime Minister Bibi Netanyahu and destroy Iran’s nuclear assets in a joint American-Israeli pre-emptive strike.

In addition to their drive for nukes, the zealots in Tehran—with the help of Shia allies like Lebanon-based Hezbollah and disparate Shia militias from as far away as Afghanistan—have kept a brutal dictator in power in Damascus. What’s more, the Mullahs are intent upon creating a corridor from Iran through Iraq and Syria to the Mediterranean Sea. From there, with the help of the Russians, they can dictate the future of the Arab Middle East as well as the strategically vital Persian Gulf. A newly emboldened imperial movement under the control of Tehran will place Saudi Arabia and other pro-American Arab states like Egypt and Jordan at risk, not to mention Israel—America’s most valued ally in the region. This existential threat represents a dramatic shift in power over a wide area of the Middle East, one that places American security interests at risk. Iran’s quest to create an Arc of Shia domination in the region therefore—and not just its lust for nuclear weapons—justifies an American-Israeli military campaign to deny the Mullahs that prize.

In contrast to this narrative, there is an alternative interpretation of Iran’s international behavior. In a compelling Foreign Affairs essay Vali Nasr asserts Iran is not driven by revolution but rather national self-interest. “Iran sees a U.S. led regional order as a roadblock in the way of its ambitions.” Because of the wars in Afghanistan and Iraq, tens of thousands of American troops have occupied territory on its western and eastern borders. It sees a Sunni-Arab order as another threat to its security; a fear fed by an eight-year war with Iraq—one where Washington sided with Saddam Hussein. In addition, Saudi Arabia and Israel spend more money on defense than Iran does. It’s defense budget represents 3 percent of GDP compared to 10 and 6 percent for Saudi Arabia and Israel. “To compensate for this handicap, Iran has adopted a strategy of ‘forward defense’” that relies upon allies like Hezbollah and disparate Shiite militias to contain its Arab, Israeli and American enemies.

“If Iran’s behavior appears more threatening today than it once did” it is because of the drastic changes that the Middle East has experienced over the past decade and a half. “Gone is the Arab order on which Washington relied for decades to manage regional affairs and to limit Iran’s room for maneuver. A chain of events, starting with the U.S. invasion of Iraq in 2003, culminated in the implosion of the Arab world, as social unrest toppled rulers, broke down state institutions, and triggered ethnic and sectarian strife that in some cases escalated into full-fledged civil war.”

In response to this turbulence, Obama sought to reduce America’s profile in the region; so, among other things, he ignored Hillary Clinton who favored the deployment of a heavy U.S. force to Syria. He also did not withdraw from Afghanistan as promised. In his wake, President Trump has returned to an agenda that rests on the “Arab alliance system” that includes Israel. But Nasr says this is bound to fail because, “Iraq and Syria are weak and broken, unable to control their own territories and ruled by governments that are closer to Iran than to the United States’ Arab allies.” Nor can “Saudi Arabia, pick up the slack.” Indeed, by invading Yemen, Crown Prince Mohammed bin Salman has entangled his military in a war that damages the political stability and future of Saudi Arabia. Nasr also points to Turkey’s decision to seek a fragile alliance with Moscow and Riyadh as part of whittling away at American influence in the region.

One might add that by becoming entangled with unstable Sunni Arab countries—such as Egypt and Saudi Arabia—Israel may find itself ensnared in the violent and unpredictable mayhem that will surface should the current leaders in both countries be ousted by internal enemies or ripped apart by jihadist militants who see them as “traitors to Islam.” In short, Trump’s attempt to create an Arab-Israel coalition that pacifies the region may produce just the opposite outcome—one that constitutes a new phase in America’s tragic crusade in the Middle East.

Nasr fears, “Based as it is on a warped understanding of the causes of the disorder in the Middle East, the Trump administration’s Iran policy is caught in a self-defeating spiral.” It is foolhardy then to hope that a new Arab-Israeli alliance will produce a more promising outcome. “Rather than conceive of a regional order designed to contain Iran, the United States should promote a vision for the Middle East that includes Iran. It should convince Tehran that it would be better off working with Washington and its allies than investing its hope in a Russian-backed regional order.”

American strategists seeking reconciliation with Tehran know that unlike Saudi Arabia—the key to President Trump’s Middle East policy—Iran is not a phony country, that is a bastard child of the Ottoman Empire’s demise and the meddling of European colonial powers. It has a thousand year-history and whatever regime rules in Tehran, the country as it is constituted today will remain in place. The largely pro-American Iranians that many analysts believe will ultimately replace the theocrats and hardliners in the Republican Guard, will adhere to a nationalist agenda—one that keeps Iran intact. The same cannot be said for Saudi Arabia where many Kingdom-watchers predict that Prince Salman’s reforms will spawn a bitter struggle within the House of Saud and splinter the country as we know it today. Of course, those eager to even the score with Tehran have ignored other pertinent facts about Iran; for example, in Anbar Province many Americans died at the hands of Sunni terrorists that were funded by Saudi Arabians and religious cohorts in other Arab countries. None of the nineteen killers responsible for 9/11 were Iranians and Sunni insurgents are not being bank-rolled by them. The same, of course, does not hold true for the Saudis. Furthermore, Iran may have a dismal human rights record but is it any worse than that found in Egypt or Saudi Arabia? Turning to JCPOA, whatever its limitations it has served the security interests of the United States. If president Trump voids it, no one knows with certainty what will happen next, but the outcome is likely to be troublesome—for example, Tehran could resume its drive for nuclear weapons. Perhaps as significant, Trump’s nullification of the accord will provide Kim Jong-un with a powerful incentive for not reaching a nuclear deal with the United States. To cancel JCPOA then is an irrational posture but in Donald J. Trump’s surreal world reason often is an orphan.

It is against this backdrop that we should revisit the pivotal question: “Why has President Trump joined the interventionists in a crusade to dictate the future of the Middle East?” The answer is driven by internal not external factors. Consider the cascade of bad news that has ravaged the White House in recent weeks: mounting reports that the Mueller investigation will find evidence that President Trump or his entourage have obstructed justice while practicing financial malfeasance if not collusion with Russia; incessant demonstrations on his part that he is not qualified to be commander in chief; and chaos so prevalent in the White House that prominent Washington lawyers have rejected offers to serve in his behalf. He may escape impeachment, but the GOP is likely to lose the House and perhaps even the Senate in November. Furthermore, it is a safe bet that he will engage in other personal and policy actions that emasculate his capacity to govern and deny the country a firm internal foundation to cope with dangerous international challenges.