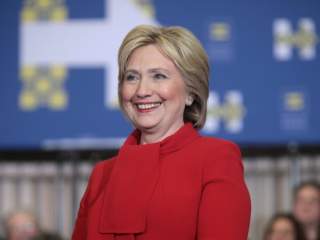 On Monday, National Interest editor Jacob Heilbrunn sat down for a discussion with Leslie H. Gelb, president emeritus of the Council on Foreign Relations, a former columnist for the New York Times and a former senior State and Defense Department official.

Leslie H. Gelb: She should fear Robert Kagan because he provides an intellectual basis for her worst instincts. Her instincts are to solve problems by force, to assert American might. And then most of the problems we’re facing now—the lead of our foreign policy should not be force. Force has got to be there, and it's got to play a role, particularly in the issue of terrorism, fighting terrorism. But basically, it’s got to be diplomacy and economics, and organizing alliances for action to tackle these problems. That’s got to come first. And Kagan really doesn’t put much store in organizing coalitions to tackle problems—it’s all about assertion of American might.

JH: In your article in Democracy, you went through Kagan book by book. What was your conclusion about the body of his work? How does it stand up?

LG: I don’t think it stands up well in terms of the substance of foreign policy. I’ll give you one example, but this really is typical in many ways. He denigrates the importance of economics in international politics in the twenty-first century. Where I would say, that month in, month out, the single most potent factor in the power of a nation is its economic strength, and its ability to organize international activity in economics—in trade and investment and so forth. That’s what concerns most leaders and most nations most of the time. And he tosses it away. And specifically, in his last book, he denigrates the importance of China, except for its growing military strength. The economy doesn’t mean anything, even though by some measures it’s the largest economy in the world. And countries all over the world particularly in Asia have to pay attention to China. China is the biggest trading partner for them, and the biggest investor. That matters.

Let me say one thing further. One thing that neocons say, that really rings home, and hits the liberals in the gut, is the liberals’ denigration of military power. It’s gone too far. And it’s as if for liberals—and even for many moderates—military power doesn’t play a role anymore. You look at the failures in Iraq, and Afghanistan, too, and say, “See? Military power doesn’t count. In fact, it leads us astray.” But to deal with the problem of terrorism—especially in Syria, but elsewhere as well—there’s got to be military force. And while our role should not be another land war where we’re in the lead, where it becomes “America’s war”—that’s where the neocons always fall short. They want to turn everything into “America’s war.” But it’s got to involve war. And we’ve got to be the ones to put together a military alliance to fight terrorism in Syria, Iraq, Turkey.

And I want to stress that some necons do good and important work, like Eliot A. Cohen and Max Boot. Their research is careful and they provide real insights.

JH: Donald Trump is the Republican front-runner. He seems to espouse what might be called an “anti-neocon foreign policy.” What’s your take on Trump’s foreign policy as far as one can be discerned?

LG: Well, it’s hard to discern it. He is in no sense a foreign policy expert or a plausible thinker on foreign policy. He has a shotgun approach to it. And sometimes it’s kooky. And sometimes it kind of bears out the lessons of the last fifteen or twenty years. He, too, is quite cautious about getting involved in another—U.S. getting involved in a major way in a land war in Syria. And yet, on the other hand he keeps talking about building up American military power as if he’s going to use it to solve these very same problems. I think he hasn’t begun to come to terms with what he himself believes, if he believes anything.

JH: Who do you think his likely foreign-policy advisers or officials would be in a Trump administration? Any idea?

LG: That’s a good question. He mentioned Richard Haass most of all. I imagine that’s the result of his having had several conversations with Haass. I don’t believe he’s read anything Haass has written, because I don’t think he reads. But I think he would look to people like that. I don’t think that there’s any ideological group that he would depend on. He mentioned retired General Jack Keane as another person he talks to or admires. Keane is a very smart guy, very conservative and very strong on the use of military force. But he’s a serious man, and he’s the kind of guy who ought to be involved in conversations with the president.

But I don’t think Trump has given this much thought, who would be his foreign-policy team, and when he does, it’s not going to be his picking one person who then picks, you know, the next twelve. I think Trump would be involved in it all, and it would be—how should I put it?—eclectic.

JH: Yesterday we had the Alternative Party for Germany scoring very well in state elections. We see Brexit in the UK. Are we witnessing a rise in nationalism around the globe?

LG: There’s no doubt in my mind that we’re seeing a rise in anti-foreign nationalism, anti-Muslim nationalism, because people, particularly in Europe and the United States, don’t want to get in the business of absorbing the refugees from these Muslim and Arab wars. It’s frightening. And it’s frightening because they seem to be angrier than other groups that Europe and America has absorbed. And there’s uncertainty and fear about where this anger will turn.

You know, for example, with the rise of the number of Muslims in Europe, there’s also been a rise of anti-Semitism in Europe. They’re bringing that with them. There’s also a feeling, particularly in Europe, less so here in the United States, over why the Syrians, for example, the Syrian refugees, are flocking by the millions to Europe, when they ought to be in their own country fighting for their own country. They need to be armed there and they need to fight for them. There are thirty thousand or forty thousand ISIS or jihadis in Syria, and there are two million Syrians pouring out of the country, into Turkey and into Europe—why aren’t they staying there and fighting? They should be able to overwhelm ISIS, but they’re more interested now in leaving. What impact will they have in Europe and America? Will they bring their traditional anti-Semitism with them? Will they bring an emotional kind of politics? Will we see, even though maybe very very very few in number, the rise of acts of terrorism from this group? And you can have ninety-nine point nine percent of them being antiterrorist but still some terrorists could come in. And once that happens, I think we’ll see Europe and America going even crazier.

JH: Israeli Prime Minister Benjamin Netanyahu is not coming to Washington. Who do you think is the culprit for the frictions in the Israel-America relationship during the Obama administration?

LG: So much of the attitude in Israel and among American Jews turns on what they think the president feels about Israel. What’s in the president’s gut. And with Mr. Obama, from the beginning the sense was that he didn’t have feeling for Israel. His first trip to the Middle East was to Egypt, not to Israel at all. It was rather astonishing. And in his famous Cairo speech, there wasn’t much about Israel, it didn’t factor in. So suspicions and doubts immediately appeared, saying, “What is this guy really gonna do in a pinch?” Now, that feeling became so strong that in Israel and among American supporters of Israel, they neglect the fact that Obama has probably provided Israel with more first-rate military hardware than any of his predecessors, and he’s been pouring important new military equipment into Israel—and he’s upped the amounts, too. All that gets lost because of the sense that he really isn’t, in his gut, pro-Israel. . . . That said, I think a lot of the fault for Israel’s losing support in America and around the world, and particularly in Europe, is because Bibi has allowed Israel to be turned into the culprit in the peace talks instead of being a nation trying to figure out how to maintain its safety in a peace deal—and you have to worry about that if you’re an Israeli leader. The issue has been turned into “are Israelis against peace?” I think Netanyahu is largely to fault for that.

JH: You were in the Johnson administration during the Vietnam War, and saw firsthand the turbulence of the Sixties both in foreign and domestic policy. Are we still dealing with the fallout of that era, the crackup of the foreign-policy establishment, the transformation of the Democratic Party, which was taken over by George McGovern? Is the polarization that we’re experiencing today and the rise of Trump still one of the aftershocks of that era?