Why Hitler Wanted to Conquer New ‘Lebensraum in the East’ 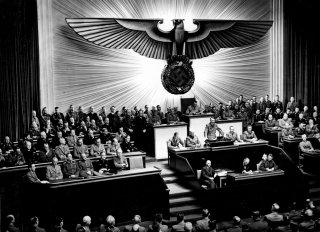 Economic factors played a decisive role in Adolf Hitler’s thinking, as I demonstrated in detail in my book Hitler. The Policies of Seduction. Hitler’s goal was to conquer new “living space” (Lebensraum) in the East, i.e. in Russia. He had made no secret of this ambition and even openly outlined his goal in Mein Kampf, in his Second Book, and in numerous speeches.

Hitler adhered to a theory that was also advocated by Marxist theorists such as Rosa Luxemburg and Nicholai Bukharin, the “shrinking markets” theory. Hitler considered the path that German companies had adopted, which had made them dependent on exports, to be a major mistake. In Hitler’s opinion, sales markets would continue to shrink as a result of the industrialization of former agrarian countries. Therefore, focusing on exports would lead to a dead end; only Lebensraum in the East could solve Germany’s problems.

Is this not proof that World War II was waged in the interests of capitalism? On the contrary. Hitler, after all, firmly rejected what he called the strategy of the “economically peaceful conquest of the world.” In his opinion, the German economy’s strong dependence on exports was a dangerous misjudgment. Hitler wanted to make Germany autarky, independent of the world economy by conquering new “Lebensraum in the East.”

He was by no means concerned with opening up new sources of raw materials and sales markets for private capitalist companies, for he had in mind a planned economy for the postwar period and in the conquered territories. Shortly after launching the attack on the Soviet Union, on July 28, 1941, Hitler declared: “A sensible employment of the powers of a nation can only be achieved with a planned economy from above.” And about two weeks later he said: “As far as the planning of the economy is concerned, we are still very much at the beginning…” He repeated this sentiment about a year later: “Even after the war, we would not be able to renounce state control of the economy,” because, he continued, otherwise every interest group would think exclusively of the fulfilment of its own desires.

Hitler’s admiration of the Soviet economic system grew and he confessed that he considered it to be far superior to the capitalist one. Addressing a small circle in August 1942, Hitler observed:

If Stalin had continued to work for another ten to fifteen years, Soviet Russia would have become the most powerful nation on earth, 150, 200, 300 years may go by, that is such a unique phenomenon! That the general standard of living rose, there can be no doubt. The people did not suffer from hunger. Taking everything together we have to say: They built factories here where two years ago there was nothing but forgotten villages; factories which are as big as the Hermann Göring Works.

On another occasion, also to a small group, Hitler said that Stalin was “quite a genius,” for whom “one has to have unqualified respect,” especially given his all-encompassing economic planning. There was no doubt in his mind, Hitler added, that there had been no unemployed in the USSR, as opposed to capitalist countries such as the United States.

On several occasions, the dictator mentioned during table talks that it would be necessary to nationalize the big share companies, the power industry and all other branches of industry that produced “essential raw materials,” for example the iron industry. The war was, of course, not the right time to implement such radical concepts of nationalization. Hitler and the National Socialists were aware of this, and in any case, they had to make every effort to dispel the fears of nationalization held by the country’s industrialists. A memo from Heinrich Himmler on October 21, 1942, for example, states that, “during the war” a “fundamental change of our completely capitalistic economy is not possible.” Anybody who was to “fight” against this would provoke a “witch-hunt” against himself. In a report prepared by a captain in the army, in July 1944, the question “Why does the SS engage in business activities?” was answered as follows:

This question was raised specifically by circles who think purely in terms of capitalism and who do not like to see companies developing which are public, or at least of a public character. The age of the liberal system of business demanded the primacy of business, in other words business comes first, and then the state. As opposed to this, National Socialism takes the position: the state directs the economy, the state is not there for business, business is there for the state.

During a conversation with Benito Mussolini on April 22, 1944, Hitler said he had become convinced that capitalism had run its course and that the nations were no longer willing to stand for it. Only “Fascism and National Socialism” would survive the war, he said, and “maybe Bolshevism in the East.”