Why Hungary Is Zelenskyy’s Other Big Problem 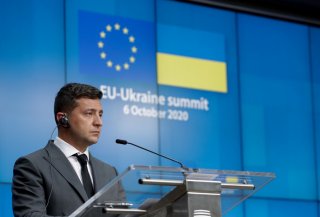 VOLODOMYR ZELENSKYY, who is the president of Europe’s poorest country, confronts a welter of problems, including Russian separatism in the east, resurgent populism and eye-popping clientelism in the country’s parliament, zero foreign direct investment, corrupt courts, oligarchs galore, and enthusiastic but wavering attention from the West. The buoyant Ukrainian leader wants to end the war, make Ukraine rich, and end corruption—all worthy but hard goals. Plus, he wants Ukraine to join NATO now. For the past two years, Zelenskyy and his team have devoted much of their energy to trying to bring peace to eastern Ukraine in order to lay the groundwork for embedding Kyiv in the West since Ukraine’s membership bid is unlikely to move forward with an open war in its east. Despite a number of efforts, it has failed. But there’s another problem that may spike Zelenskyy’s NATO plans. That problem is in Ukraine’s west, not east, and it is Hungary.

ON A recent trip to Ukraine, I got a bird’s-eye view of the difficulties that the country faces. It offered a reminder, among other things, that the country has no roads but plenty of churches, as my driver and I swerved around labrador-sized potholes and stumbled upon one iridescent blue and gold onion-domed church after the other in Transcarpathia, Ukraine’s mountainous western region bordering the European Union. The region defies easy description. “In Kyiv, everyone is Ukrainian. Not true in Transcarpathia,” Yevhen Hlibovytsky, a social scientist and partner at Pro.Mova, a consultancy, told me. A region that borders Hungary, Romania, and Slovakia, Transcarpathia is home to the Hutsuls, Romanians, Hungarians, and a tiny Jewish population (people are more tolerant here than in other parts of the country). A live-and-let-live attitude pervades the area.

My guide to the region was Dmytro Tuzhanskyi, a bearded thirty-something hipster and founder and CEO of the Institute for Central European Strategy. Living in Uzhgorod, the largest city on Ukraine’s border with the European Union, Tuzhanskyi specializes in the region’s many identities and provided insight. He’s not from the mountains but cannot pull himself away from its differences, or its spicy bograch, better known as goulash in the West, where red pepper flakes enliven the beef soup and castles watch over us as we slurp the soup and inhale salo, the pork fat that one slathers on dark rye bread. We pulled into a gas station in Solotvyno, a village that is half Romanian and the rest is a mix of Hungarian and Ukrainian. Romanian, Hungarian, and Ukrainian flags hang on the village hall. Cavernous, nearly identical, and soulless empty houses in various terra cotta shades line the main street. Tuzhanskyi says that the large homes belong to Romanians, who are better integrated into Ukraine than the Hungarian community. A large Ukrainian outcropping in Romania exists, although numbers are disputed. According to the 2011 Romanian census, there were 51,700 Ukrainians in Romania, but Ukrainians claim that the real figure ranges between 250,000 and 300,000. Overall, though, Tuzhanskyi says that Romanian-Ukrainian relations are solid.

But Hungary, by contrast, is adept at creating difficulties for Ukraine. Since Budapest is a member of the European Union and NATO, it can block Kyiv from entry into each. Hungary seeks to reunify its people and its nation, and Budapest is more than happy to pony up the funds to do so. Under the 1920 Treaty of Trianon, the bugbear of Hungarian nationalists, Hungary was divided. One-third of the Hungarian population ended up outside of the borders of what constitutes modern Hungary. While the country has approximately ten million people, one million Hungarians live in Romania, 500,000 in Slovakia, 120,000 in Ukraine. In Ukraine, and in the so-called historic lands of Hungary, Hungarian children receive their education in the Hungarian language and to Hungarian standards. Over the last thirty years, Budapest has created a network of schools, arguing that if one is Hungarian, one should have a right to education in Hungarian from kindergarten to university. Personal relations between Hungarians and Ukrainians are fine, Tuzhanskyi reassures me, but relations between Budapest and Kyiv are another matter. Hungary regularly blocks Ukraine’s further integration into NATO and pertinaciously puts up a fuss over the language issue in western Ukraine.

The mix of identities might offer Moscow a chance to make Kyiv’s life even more difficult than it already is, a possibility that no doubt delights Russian president Vladimir Putin, who recently argued that the belief in a Ukrainian identity is bogus. The Russian president mentioned the Carpathians in his recent article, using the term “Pidkarpatska Rus,” which was the name of the region during the existence of Czechoslovakia. The region has everything one needs for maximum monkey business: multiple identities with questionable loyalty to Kyiv, numerous languages, high levels of corruption, and one of the strongest levels of adherence to the Moscow Patriarchate of the Russian Orthodox Church in Ukraine.

Moscow’s intentions in Transcarpathia thus are not hard to discern. Russia wants to destabilize western Ukraine. When Russia forcibly annexed Crimea and gobbled up some of eastern Ukraine in 2014, Russian Orthodox priests in the Carpathians were quick to describe the conflict as a civil war within Ukraine. This fiction helps to bolster Moscow’s contention that it was simply reclaiming what always belonged to it.

SO FAR, geopolitical tempers haven’t flared in the Carpathians and there have been no serious attempts at secession from Ukraine. But thanks to Budapest’s munificent purse, the Hungarian community in Ukraine controls influential Hungarian-language newspapers, websites, and television stations in western Ukraine. Many locals carry both Hungarian and Ukrainian passports. Fidesz, the political party directly connected to Hungarian prime minister Viktor Orbán, has said irresponsible things about the conflict in Ukraine. “The Ukrainian government’s actions are bringing about the situation of a civil war in Zakarpattia,” Fidesz wrote in a statement said in 2020. “They don’t believe in the successful future of Ukraine. They don’t feel like Ukraine is a state,” Tuzhanskyi told me. For Ukraine, a multi-ethnic country of forty million in the middle of a massive state-building project, this is a big problem.

The difficulties are compounded by the fact that this region, located hundreds of miles from Kyiv, largely escapes the attention of bureaucrats, giving local elites a free hand. Enter the Baloha family. It has governed, or, to put it more precisely, ruled, the region for years. Victor, head of Viktor Yushchenko’s presidential administration between 2006–2009, is currently an MP. His twin brothers Ivan and Pavlo also held seats in the parliament, and his son Andriy was mayor of the smuggling capital of Ukraine, Mukachevo, for a spell.

“Why is our region too rich and famous? Because we have two Christmases and three Balohas.”

In the German-speaking town of Ust-Chorna (or Königsfeld), twelve to fifteen families attend the local German Catholic church, which recently underwent a roof renovation. Everyone pitched in, even if they do not attend. Residents celebrate both Catholic and Orthodox Christmas, and people respect each other’s holidays.

But the region is diverse. Before World War II, approximately one-third to one-half of the population was Jewish, but few of the region’s 85,000 Jews survived the Nazi invasion. To find the Jewish community in Zakarpattia today, one needs to dust off a history book. Historically, there were synagogues in Mukachevo, Uzhgorod (a remarkable Moorish synagogue standing on the Uzh River converted into a concert hall since World War II), and Berehove. One Transcarpathian Jew whose family did survive is Alexander Rovt, a Ukrainian fertilizer billionaire, who hails from an observant Jewish family in Mukachevo. But he too relocated: Rovt now lives in New York City. Another Jewish family owns Chateau Chizay, an extravagant vineyard that easily surpasses anything I have seen in Maryland or Virginia. The owner also lives abroad.

That diversity goes beyond its ethnic minorities. In the tiny town of Nyzhnii Selyshche, Oreste Del Sol, a Frenchman, moved to Ukraine more than twenty years ago and never looked back. He married a local and now produces the best goat cheese I have ever had and a first-rate Grüner Veltliner from the Selyska Cheese Factory, outfitted with an air-controlled secret passageway between the factory and restaurant. On May 18, the day before he opened his new restaurant, Geleta Restaurant, he plied us with incredible fresh trout, a goat cheese salad, and gelato—and implored us to come again. Del Sol is also a local environmental activist, who has urged Zelenskyy to protect the Carpathian forests which are being razed to build new resorts which ultimately benefit their oligarchic owners, like Ihor Kolomoisky.

SEEN FROM western Ukraine, Hungary’s strategy to reintegrate its historic lands looks downright foolish. Young Hungarians in Ukraine have EU passports and they are traveling abroad in increasing numbers. It’s only a matter of time before the Hungarian population in Ukraine moves to the European Union or eventually dies out.

So, what keeps a lid on the regional differences? Corruption, Hlibovytsky argues. “Corruption is the way out of conflict,” he said. “You coexist but you don’t cooperate very often.” Ukrainians, Hungarians, Romanians, and Hutzels ride buses together and live with each other, but multiculturalism is thin. Of all the regions in Ukraine, Zakarpattia oblast rates number one for its tolerance toward corruption.