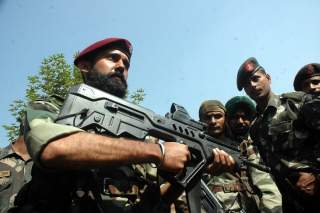 The Uri terrorist attack on the Indian Army base on September 18, which killed twenty soldiers and wounded thirty five, has once again brought to the fore Pakistan’s continued use of terrorism as state policy against India. According to the latest reports, all four terrorists involved in the Uri attack came from a terrorist training camp situated in Pakistan-occupied Kashmir. Consequently, the attack has underscored the fact that Pakistan is in no mood to reciprocate India’s efforts to develop at least a working relationship, thereby promoting a peaceful security environment in the South Asia region.

Over last two and half years, Prime Minister Narendra Modi has made efforts to improve relations with Pakistan under his neighborhood first policy.” He invited Prime Minister Nawaz Sharif for his government’s swearing in ceremony in New Delhi in 2014, and dropped by Lahore for Sharif’s birthday in December last year, showing his desire to travel extra miles to engage Pakistan. This became more apparent when Prime Minister Modi appeared determined not to allow the Pathankot attack to negatively impact the ongoing peace process between the two countries and even granted permission to the Pakistani investigating team to visit Pathankot.

Pakistan, however, has reciprocated with a series of steps that have damaged relations. When the Indian government provided clear evidence to the Pakistani investigating team showing the involvement of the terrorist organization LeT, the Sharif government refused to act against LeT mastermind Masood Azhar. Nor did it allow India’s National Investigating Team to visit Pakistan. Pakistan was also involved in the political unrest which emerged following the killing of LeT terrorist Burhan Wani. And Prime Minister Sharif’s decision to send its 21 parliamentarian to different parts of the world to raise the issue of human rights violations in the Indian state of Jammu & Kashmir angered the Indian government.

While New Delhi has taken all the necessary efforts to bring peace and normalcy in the Kashmir Valley, the recent Uri attack has finally hit the dialogue process between India and Pakistan to the wall. In fact, there is a strong clamor in India for a befitting military action against Pakistan.

However, understanding the gravity of the situation, the Indian government did not take any knee jerk action like cutting off the diplomatic connections with Pakistan or mobilizing forces along the border with Pakistan. Instead, New Delhi focused on developing a multi-pronged strategy to tame Pakistan, with Prime Minister Modi assuring the nation that those behind the “despicable” strike would not go unpunished. One aspect of this strategy is to isolate Pakistan internationally. In this regard, while External Affairs Minister Sushma Swaraj’s speech at the United Nations General Assembly has attracted world leaders’ attention to Pakistan’s involvement in the running the proxy-war against India, New Delhi has also succeeded in isolating Islamabad at the regional level with Afghanistan, Bangladesh, Bhutan and Sri Lanka cancelling their participation in the SARRC annual meeting in Pakistan. The recent announcement of a $1 billion highway project connecting India, Nepal, Bangladesh and Bhutan would further help New Delhi in isolating Pakistan. The Modi government has also decided to highlight the issue of human rights violations by Pakistan in the Baluchistan region. The Indian government is assessing the possibility of cutting off all economic, trade and commercial ties with Pakistan. The review of the Indus-Water Treaty and Prime Minister Modi’s saying that blood and war cannot flow together gives a clear idea of the determination of the Modi government to deal with the malevolent behavior of Pakistan.

On the international front, while all the big powers have strongly condemned the Uri terrorist attack, Congressman Ted Poe, Chairman of the House Subcommittee on Terrorism, along with Congressman Dana Rohrabacher, introduced HR 6069, the Pakistan State Sponsor of Terrorism Designation Act in the House of Representatives. At the same time, the Indian-American community in the United States launched a White House petition to designate Pakistan a state sponsor of terrorism. So the Modi government’s policy of isolating Pakistan has so far produced a positive outcome.

The surgical operation carried out by the India armed forces on Pakistani territory has sent a clear message that the Indian government is not of two minds about exercising its military prowess, and that its defense establishment is capable of hitting back proportionately. For a long time, India observed great restraint in exercising military actions against Pakistan, given its threats to use nuclear power. However, this surgical strike has significantly dented Pakistan’s nuclear bluff. This is evident from the fact that Pakistan has not acknowledged that India has carried out any such surgical strike, ruling out the possibility of the emergence of a war-like situation between the two countries. Since the big powers have not expressed any adverse opinions on India’s military action, Pakistan has found itself completely isolated in the current situation. In fact, the United States has strongly asked Pakistan to behave as a responsible nuclear power.

Experts have also argued that there is a domestic angle to the recent surgical strike. Despite Prime Minister Modi’s assurances during the parliamentary election campaigns in 2014 that his government would give a befitting reply to Pakistan for its involvement in terrorism against India, the failure of his government to take military action against Pakistan following the Pathankot terrorist attack had generated huge anger among the Indian people. Thus, experts felt that no military action this time might prove to be very disastrous for the BJP in the Utter Pradesh assembly elections to be held in 2017.

Whether there was any domestic compulsion for the Modi government to demonstrate its military prowess or not, the fact remains that this is the first time that India has a clandestine and comprehensive policy to tackle the malevolent behavior of Pakistan. At the same time, India needs to overhaul the security lapses that continue to hamper the efficiency of its security forces. As with the Pathankot attack, there were prior intelligence reports of the infiltration of terrorists in the Uri region. This underscores the fact that there is lack of proper coordination in passing intelligence inputs among different sections of the security establishment. India needs to install sophisticated and high-powered surveillance in its defense premises after these sorts of attacks. Lastly, given the fact that there is growing dissatisfaction against the functioning of the Mahbuba Mufti government in the Indian state of Jammu & Kashmir, it is necessary for the Modi government to see that the state government effectively implements central and other developmental schemes, thereby dealing with the feeling of disenchantment among the people in the state. After all, it is highly improbable that without the winning the hearts of the people of the Kashmir Valley, India can completely succeed in curbing terrorist infiltration into its territory from across the Pakistani border.

Sumit Kumar has submitted his PhD to the UGC Centre for Southern Asia Studies, Pondicherry (Central) University, and is a guest expert at the Middle East Institute, Washington, DC.