Why Iran’s Bellicose Foreign Policy Is Unlikely to Change 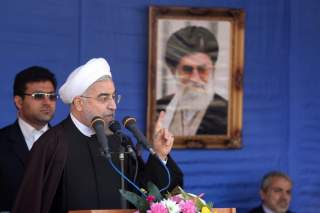 As the deadline for Congressional action against the Joint Comprehensive Plan of Action with Iran has passed on September 17, the agreement is finally about to be implemented. Some supporters of the deal have argued that in the absence of a stalemate over Tehran’s nuclear activities, the West can now engage Iran to stabilize the Middle East, most notably with regards to rolling back the Islamic State in Iraq and the Levant (ISIL). John Kerry fueled these hopes when he said that Iranian foreign minister Zarif had told him that thanks to the deal he would be “empowered to work with and talk to you about regional issues.” Federica Mogherini, the EU’s High Representative for Foreign Affairs and Security Policy, even voiced hope that time might be ripe for an entirely new “regional framework […] based on cooperation rather than confrontation.”

This optimism, however, underestimates the anti-American agenda and the influence of Iran’s self-declared guardians of the revolution. Supreme Leader Ali Khamenei, the key figure in the Iranian political system, is a case in point. While President Hassan Rouhani has been very committed to concluding the nuclear deal, Khamenei was the one who has always expressed reservations about engaging the United States. He once compared his attitude to the negotiations to the behavior of a wrestler who sometimes “shows flexibility [for] technical reasons,” but “should not forget who his opponent and enemy is.” From his perspective, the compromise on the nuclear issue was a tacit concession to get much-needed sanctions relief and by no means a blueprint for reconciliation. After Rouhani cautiously expressed his interest in expanding Iran’s cooperation with “various countries,” the Supreme Leader immediately pushed back and told his fellow citizens to “prepare for the continuation of the fight against America.”

Some analysts have dismissed such statements as empty words to appease radical groups within Iran. Unlike the Supreme Leader’s red lines regarding the nuclear negotiations, this kind of rhetoric is, however, backed up by action. Iran’s Qods Force––the wing of the Islamic Revolutionary Guard Corps (IRGC), which is running the IRGC’s external operations and was instrumental in supporting radical Shiite militias during the insurgency in Iraq––has reportedly plotted terrorist acts against targets from Israel and the Gulf states, the key U.S. allies in the Middle East. Most notably, the Qods Force was behind the attempt to kill the Saudi ambassador to the United States on American soil in 2011. Apart from plotting its own attacks, the Qods Force has also encouraged and supported Hezbollah in its endeavor to follow suit.

The Qods Force––and not the comparatively moderate forces that negotiated the nuclear deal––is also in charge of coordinating Iran’s current military and diplomatic engagement with respect to the region’s hot spots, such as Syria, Iraq and Yemen. In its capacity as primary Iranian stakeholder in regional affairs, the Qods Force has dramatically stepped up its activities and undermined regional stability in recent years. When the Assad regime was under increasing pressure from the Syrian insurgents, the Qods Force teamed up with its long-standing proxy Hezbollah to keep the regime from falling. To this day, Hezbollah militants and IRGC forces fight alongside Assad’s army. As a result, the Syrian regime has continued its brutal attempts to suppress the popular revolt and thousands of foreign fighters have flocked to Syria to join Sunni insurgents, including terrorist groups. In addition, the Qods Force has doubled down on its support for the Houthi rebels in Yemen, who drove American forces out of the country a couple of months ago.

It is particularly noteworthy that the Qods Force increased its involvement in Syria and Yemen, although the United States and Iran simultaneously narrowed their differences on the nuclear issue. In other words, the idea that a compromise on the nuclear file can undo the severe conflicts between the United States and Iran on other issues has so far been powerfully disproven. The odds that Iran is going to change its behavior in the future are quite low. Things are rather likely to get even worse. In a recent speech, the Supreme Leader vowed to keep up the support for the “oppressed people” of Yemen and––mentioning another potential trouble spot––Bahrain. The continuation of the alliance between Iran and its only governmental partner in the region, the Assad regime, is also pretty much a given.

It is true that Iran and the United States have demonstrated that they can find common ground, if both countries deem collaboration to be in their interests. Supporters of deeper engagement with Iran are right to point out that efforts to roll back ISIL fall into that category, but that should not overshadow the strikingly discrepant goals, values and interests both sides have. The United States should not act under the assumption that a long-standing foe, who has turned out to pursue an extremely aggressive agenda that runs counter to its own, can be flipped into a friend. Instead, it should now focus its efforts on containing Iran’s regional ambitions and preventing Iranian-inspired terrorist attacks. In both cases, it will be crucial to seek new international allies to isolate and weaken the Qods Force.

Sven-Eric Fikenscher is an Associate with the Project on Managing the Atom at Harvard University’s Belfer Center for Science and International Affairs.