Why Iran Can’t Walk Away from Nuclear Talks So Easily 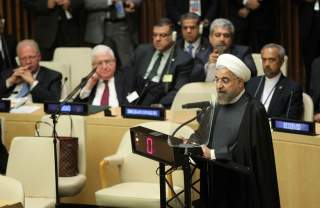 Iran resumes nuclear negotiations with the P5+1 (United States, UK, France, Russia, China and Germany) with wide gaps reported between the two sides; specifically, the Iranian government is reluctant to reduce the number of its nuclear centrifuges while the United States is anxious for Iran to decrease them. This has led to some speculation that the government of President Hassan Rouhani may consider walking away from the nuclear negotiations if it doesn’t get what it wants. It may be tempting for Rouhani and his foreign minister, Mohammad Javad Zarif, to think that they can get away with such a move. While Tehran seems to be in a much better position now than it was even a year ago, Rouhani and Zarif should not overestimate their position.

The momentum toward broader sanctions against Iran seems to have stopped with the Joint Plan of Action signed in November 2013. Many European and Asian powers are eager to participate in a more open Iranian economy and buy more of its oil. The rise of the Islamic State in Iraq and Syria (ISIS) has also led to calls for greater cooperation between Iran and the United States, not just in Iraq, but Syria as well. But despite all this, Rouhani and his cohorts need a deal now more than ever.

A failure to reach a deal will not diminish the sanctions regime against Iran. It is more likely that Iran will be blamed for a collapse of negotiations than the United States, which has far more leverage than Tehran may assume. Furthermore, the United States is not desperate for Iran’s help against ISIS. Overt U.S.-Iranian cooperation on regional issues could do more harm than good for American interests, especially if there is no nuclear deal. And finally, while Iran may be stable for now, Rouhani still presides over a deeply divided political system and society.

There is no doubt that many Americans and Europeans want a resolution of the nuclear crisis with Iran. This is natural, as the alternatives of war with Iran or the emergence of a nuclear-armed Iran may be too painful to contemplate. However, Iranian inflexibility on the nuclear issue will be seen for what it is. While the United States should also be flexible on nuclear negotiations, Tehran’s demand to keep most of its centrifuges could very well undermine Iran’s charm offensive.

Iran should have access to civilian nuclear technology, but an industrial-scale nuclear program employing tens of thousands of centrifuges makes little sense. And Iran’s claims of its “national right” to operate such a large program are unlikely to resonate with key decision makers in Washington, London, Paris or even Beijing for that matter. There may indeed be some “creative solutions,” as suggested by nonproliferation specialists. Washington should not obsess over the number of centrifuges; as the New York Times recently reported, Iran could disconnect the piping between its centrifuges without dismantling them. But this still may leave Iran with an industrial-sized program that could be perceived as serving a military, rather than civilian, purpose.

The onus is still on Iran to prove that it is not interested in nuclear weapons. While Tehran may blame the United States for its “intransigence” and walk away, most, if not all, of the P5+1 members and much of the international community will likely doubt Iran if it fails to prove that its nuclear program is strictly for civilian purposes. Therefore, the international sanctions regime against Iran will not easily wither.

Iran’s strong regional position is unlikely to make much of a difference. Yes, the United States and Iran may have convergent interests in dismantling ISIS, but the United States is backed by many of its European and regional partners. Some countries, Turkey for example, may fear getting involved against ISIS, but for now, the United States has at least some level of support from France, the United Kingdom, Australia, Saudi Arabia, Egypt, Jordan, the United Arab Emirates, Israel and others. Iran and the United States are unlikely to cast aside their mutual mistrust to become shining partners in this fight, especially considering the role of the Revolutionary Guards, which only a few years ago, directed attacks against American troops in Iraq. If anything, increased Iranian leverage born from its regional influence could lead to a “bad” deal in which Iran keeps most of its nuclear infrastructure as it watches ISIS be decimated and its own allies in Baghdad and Damascus strengthened. This could undermine trust between the United States and its regional allies by confirming fears that the United States seeks a “grand bargain” with Iran, no matter how untrue this may be.

And surely Rouhani is aware that his government faces a precarious situation at home. Iran’s unemployment rate keeps rising, despite reports of reduced inflation and greater investor confidence. Many Iranians are anxious for Rouhani to produce results, but will they blame the United States if Rouhani walks away from the negotiations? Despite his campaign promises to reduce repression, the human-rights situation in Iran is as bad as it was under Rouhani’s predecessor, Mahmoud Ahmadinejad. The Washington Post’s correspondent in Iran, Jason Rezaian, has disappeared and is reported to be undergoing “interrogation,” though it is unclear why. The Rouhani government has demonstrated its inability to prevent increased government repression. Of course, Rouhani does not deserve all the blame, though he is the one who promised change. A failure in nuclear negotiations will not resolve Iran’s political division and could make the economy even worse than before.

At best, many Iranians could lose any sense of hope they felt when Rouhani was elected. And, as Iranian history has shown over and over again, the Iranian people tend to see civil disobedience, street protests and even violent insurrection as possible alternatives to fruitless participation in electoral politics. Supreme Leader Ayatollah Ali Khamenei grows older and faces an uncertain succession. For all these reasons, Rouhani and Zarif need a nuclear deal—and soon. Hopefully their public inflexibility is mere diplomatic posturing. If it is not, they would be gambling not only with their own political futures, but the futures of 80 million Iranians as well.