Why Is Iran Fighting This Kurdish Group Again After 20 Years? 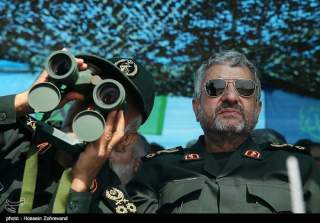 Last month, reports emerged of clashes between Iran’s Revolutionary Guard Corps and members of the Democratic Party of Iranian Kurdistan (PDKI or KDPI), reportedly killing six from each side. These clashes came just a few days after the IRGC announced that they had killed five members of another Kurdish group, the Party of Free Life of Kurdistan (PEJAK). Several days later, news of more clashes between the PDKI and the IRGC in the area of Oshnavieh (known as “Shno” in Kurdish) in northwestern Iran was made public. Then, in early July, Iran reportedly shelled Camp Liberty near Baghdad Airport in Iraq, which hosts several dissident Iranian Kurdish groups, wounding at least forty individuals.

Most recently, Heshmatollah Falahatpisheh, a member of the Iranian Majles, survived what appeared to have been an assassination attempt on the car in which he was travelling in Kermanshah (also in northwestern Iran) that left two other occupants dead. Just this past Saturday it was announced that the IRGC had arrested three individuals connected with the assassination attempt. No specific details were offered on the alleged attackers nor was it made clear if they had any connection with any armed groups, but they were arrested in Kermanshah making the odds of them being Kurdish fairly high.

These clashes between the PDKI and Iranian security services represent the first major escalation between the two in twenty years—since they agreed to a ceasefire in 1996, which saw the Kurdish group agree to withdraw from Iran to Iraqi Kurdistan. Coming as they do during a time of seriously heightened tension between Iran and several regional rivals, many observers (myself included) automatically assumed that these clashes were a function of a proxy war. A closer examination of the situation, however, revealed that this may not have actually been the case.

In the geopolitical climate of today’s Middle East, it’s very common to throw around the phrase “proxy war.” Particularly so when it comes to the interactions between Iran and most GCC states, especially Saudi Arabia. While there is undoubtedly ample reason why there is always suspicion that developments stem (in one form or another) from proxy warfare, many of us have become lazy in this regard. We are so quick to believe that a proxy war lies behind every moderately important regional development, that many of us have begun to assume it reflexively or unquestioningly. It is almost as if we have agreed amongst ourselves that regional-power politics is the only kind that exists in the Middle East, and that the various nonstate and substate groups have neither the motivation nor the capability to think or act autonomously.

The mantra seems to be that even if it walks like a duck and quacks like a duck, the duck is merely a proxy for some regional power.

If these recent clashes were, in fact, the result of sponsorship of the PDKI by a foreign state, two such states immediately come to mind as potential backers, due to their hostile relationships with Iran: Israel and Saudi Arabia.

Although both states have very strained relationships (to put it mildly) with Iran, each would stand to risk a significant geopolitical loss if they were to be instigators in these IRGC-PDKI clashes in northwestern Iran. Such risk renders the likelihood that they were behind the clashes in any sort of meaningful way nil, in my opinion.

Israel has had longstanding ties to Kurdish groups in both Iraq and Iran dating back as early as the 1960s. Also, Tel Aviv (allegedly) has also shown both an ability and a willingness to use dissident Iranian groups to conduct covert action inside of Iran. That said, sponsoring the PDKI at this point in time would seem to be a very high-risk and low-reward move for the Israelis. Primarily, the clashes were occurring right around the same time as Israel and Turkey were finalizing plans to restore diplomatic relations with each other. Not that it would have necessarily been a deal breaker, but sponsoring Kurdish groups is a bit of a sore spot with Ankara, to say the least. Restoring diplomatic relations with Turkey affords Israel significant geopolitical advantages, which vastly outweigh what little advantage annoying Iran via a Kurdish mini-insurgency would give them. Aggravating Ankara over such a policy would be considerably more shortsighted than Israel’s foreign policy usually is. It doesn’t seem likely that the Israelis had anything at all to do with the PDKI-IRGC clashes.

Saudi Arabia, on the other hand, is a much more interesting example.

First and foremost, sponsoring separatist clashes inside Iran would be very much in line with the confrontational (some might say reckless) nature of Saudi Arabia’s recent strategy towards Iran: doing something that it knows will anger Tehran, thereby provoking it into doing something stupid in response. Say—for example—standing idly by as the Saudi embassy in Tehran is stormed by protestors and set ablaze.

Sponsoring militant activity amongst Iranian Kurds would also track with longer-term Saudi strategy as it pertains to Iran. Saudi Arabia has long eyed regime change in Tehran, and has not really been shy about admitting so. In a presentation to the Council on Foreign Relations last June, Saudi Arabia’s retired Maj. Gen. Anwar Eshki laid out several important objectives for Saudi Arabia to be able to achieve its major regional goals. The full transcript can be found here, but two of the more pertinent objectives were “Changing the political system in Iran” and “Working toward the creation of a greater Kurdistan in peaceful ways as this will weaken Iranian . . . ambitions.”

If these objectives still represent Riyadh’s strategic aims in the region with regards to Tehran, it would be easy to see how the recent clashes between the PDKI and the IRGC in northwestern Iran could be viewed as a manifestation of this strategy. For the even more conspiratorial readers, the timing of the clashes would also make sense if, in fact, the Saudis were behind them. In February, Saudi Arabia officially opened a consulate in Erbil, the capital of Iraqi Kurdistan—a move that, in theory, would make it considerably easier to organize a PKDI-oriented covert action program over the border into Iran.

Though an intriguing set of facts when viewed as a whole, it must be stated that all the above constitutes, at best, purely circumstantial evidence. There is, at present, absolutely zero hard evidence linking Saudi Arabia to the uptick in militant activity in northwestern Iran. Furthermore, such a program would (as it would for Israel) be a shortsighted endeavor with a lot of risks and very little reward. The Kurdistan Regional Government (KRG), which has long had good relations with Iran, is opposed to allowing any Iranian Kurdish group to conduct attacks inside Iran from territory inside Iraqi Kurdistan. Saudi Arabia, eager to strengthen their relationship with the increasingly ascendant KRG, would be risking the burgeoning relationship, while simultaneously strengthening both its rivals’—Iran’s and Turkey’s—ties with Iraqi Kurds by organizing Iranian Kurdish militant activity in Iran.

It would logically follow that, while it may be easy and habitual to believe the clashes were a function of a proxy war between Iran and its rivals, there is a considerable amount of mitigating evidence to suggest that neither Riyadh nor Tel Aviv (the only truly plausible suspects) would believe it in their interests to do so.

A Kurdish Issue, a Kurdish Action

While it may be anathema to observers of the Middle East who have grown accustomed to seeing Saudi-Iran proxy wars everywhere, there is a substantial body of evidence that would suggest it was primarily an internal decision by the PDKI to reinvigorate its operations inside Iran. In fact, the PDKI has essentially admitted as much. In a statement published by the group in early July, the PDKI said that it had “embarked on an international campaign to find allies in the Middle East and beyond to counter the threats from the Islamist regime in Iran.” Such language would indicate that the group did not have any foreign backing prior to the beginning of its operations.

The way in which the clashes between the PDKI and the IRGC occurred also tends to discredit the notion that said clashes were part of a proxy-warfare strategy. According to the PKDI’s secretary-general, Mustafa Hijri, the PKDI acted primarily in self-defense during these clashes. He explained that their operatives were merely attempting to make contacts with the Kurdish population of Iran when they were attacked by Iranian security forces. IRGC officials seemed to have confirmed those claims by describing how the IRGC tracked and ambushed the PDKI fighters. The important point here is that these clashes were not cross-border raids by the PDKI targeting the Iranian government, as is more common with groups such as PEJAK or Jundallah. Rather, these operations were intended to penetrate Iran’s Kurdish population politically. Such tactics, similar to their comments about seeking foreign support, are not consistent with the tactics used in a foreign-backed proxy warfare program against a rival power.