Why Is Iran Shaking Up Its Military Leadership? 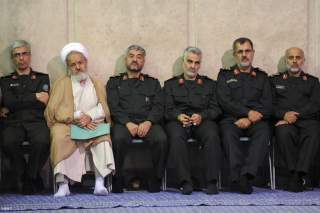 In an unexpected development late last month, Iran’s Supreme Leader Ayatollah Khamenei announced the promotion of Maj. Gen. Mohammad Bagheri as chief of staff of Iran’s armed forces. A shadowy figure from the country’s vaunted Islamic Revolutionary Guards Corps (IRGC), Mohammed Bagheri has been tasked with overseeing all branches of Iran’s armed forces, including the IRGC, the regular military (Artesh), and the police.

The previous chief of staff, Hassan Firouzabadi, had been in the position for twenty-seven years. A veterinarian by background, he was credited for significant developments to Iran’s military forces, but his lack of military pedigree remained a stain on his reputation.

Mohammad Bagheri, on the other hand, boasts a strong military pedigree: the brother of a war hero, he spent the entirety of the Iran-Iraq War on the front lines, utilizing his strategic acumen to become the IRGC’s chief of intelligence and information operations. He transferred to the General Staff immediately after the war, continuing his work in intelligence. He holds a PhD in political geography and geopolitics, and teaches at the General Staff’s officer school, the Supreme National Defense University.

Importantly, Mohammad Bagheri belongs to a clique of IRGC officers who form the organization’s core leadership, sitting alongside the likes of Mohammad Ali Jafari, the current commander of the IRGC, and Qassem Soleimani, the famed general directing the IRGC’s expeditionary wing, the Quds Force. Composed of just a few members, this clique shares deep ties dating back to the Iran-Iraq War, and is hugely influential in shaping the organization’s trajectory. Neither is it averse to intervening in domestic politics: members of this clique, including Mohammad Bagheri, signed a letter in 1999 to then president Mohammad Khatami, threatening a military coup if Khatami did not crush a growing student rebellion.

The appointment of Mohammad Bagheri as the most powerful man in Iran’s armed forces, at a time when Iran is embroiled in conflicts across the Middle East, is no mere organizational reshuffle. Rather, it suggests a fundamental tactical and strategic realignment of Iran’s military posture, spearheaded by the powerful IRGC, that could have major repercussions on regional developments for years to come.

The depth of this realignment can be seen by the extent of the changes within Iran’s armed forces, with a number of other appointments being announced in the weeks following Mohammad Bagheri’s promotion.

Most curious of these changes was the appointment of Maj. Gen. Gholam Ali Rashid, another member of the IRGC’s core leadership, as the IRGC’s representative to the Khatam al-Anbiya Headquarters, a joint IRGC-Artesh strategy and tactical planning center within the General Staff. Though rarely spoken about in recent years, the Khatam al-Anbiya Headquarters played an important role coordinating joint IRGC-Artesh operations during the Iran-Iraq War, and a number of top commanders spent their formative times in the center, including the current commander of the IRGC, Mohammad Ali Jafari. The center appears to have diminished in importance in recent years, however, with little said or heard about it in official statements or policy circles. Neither has it enjoyed a dedicated or prominent leadership since the Iran-Iraq War, with responsibility falling on Mohammad Bagheri to run it in parallel to his other roles in the General Staff.

But with the appointment of Gholam Ali Rashid, this appears set to change. He will be joined in the center by a representative from the Artesh, Gen. Hossein Hosseini Saeedi.

Why, then, have these broad changes to Iran’s armed forces been implemented now, including a reemergence of the joint IRGC-Artesh strategy and tactical planning center?

It is no secret that Iran’s armed forces have played an increasingly pivotal role in conflicts across the Middle East, especially in Iraq and Syria. Since at least 2012, and particularly after the meteoric rise of Islamic State in 2014, Iran has sent thousands of troops and advisors to shore up its allies in the region and push back against the Sunni Islamist group, which views Iran and its predominantly Shia allies as mortal enemies.

The sharp end of Iran’s interventions in the Middle East has been the IRGC, which to date has lost hundreds of fighters and tens of commanders across the region. In Iraq, the IRGC has overseen the establishment of the Popular Mobilization Forces (PMF), an umbrella organization spanning hundreds of predominantly Shia militias that fights alongside Iraq’s regular military and often commands its own operations. The IRGC provides training, weapons and frontline commanders to assist the PMF, which is dominated by militias that have pledged fealty to Iran’s supreme leader. A number of IRGC operatives have been killed in the fighting, including famed Iran-Iraq War veteran Brig. Gen. Hamid Taqavi, an ethnic Arab who in 2014 oversaw the defense of the city of Samarra, host to a revered Shia shrine.

But it is in Syria where the IRGC has played the most prominent role. Starting with covert support for President Assad’s army in 2012, the IRGC’s involvement has grown exponentially, with the organization now commanding various forces including, but not limited to: the IRGC’s own special forces, conventional ground forces, and paramilitary Basij fighters; Syrian army forces and militias that have been groomed by the IRGC; Lebanese Hezbollah; various Iraqi militias, which are rotated in and out of Syria according to need; and even an entire division of predominantly Hazara Afghan fighters, called Fatemiyoun, which are supported by a smaller contingent of Pakistani Shias, called Zeinabiyoun.

Both by design and circumstances beyond its control, the conflicts in the Middle East have reshaped the IRGC beyond recognition. Whereas the organization began as a Praetorian Guard for the Islamic Revolution, today it has transformed into a multinational military enterprise, embedding itself in historic Arab capitals and commanding an ever-diversifying group of fighters. Lebanese Hezbollah was once the pinnacle of Iran’s Islamic Revolution in the Arab world, but today Hezbollah has been dwarfed in size by the multitude of Iraqis, Syrians, Afghans and others who have been incorporated into the IRGC command structure.

The problem confronting the IRGC is that it has had very little time to adapt to such rapid growth. In the space of just four years, the IRGC has grown by tens of thousands of fighters (a conservative estimate), covering an increasingly complex and diverse battlefield landscape. Before, it was Qassem Soleimani’s Quds Force that was responsible for overseeing the IRGC’s expeditionary operations; today, the entire IRGC organization has found itself overseeing expeditionary operations in the region.

With this rapid growth and shifting operational outlook comes a significant risk of strategic overreach, and an equally complex and diverse threat level as Iran’s regional competitors become ever more concerned with its rise. Israel and Saudi Arabia in particular have made no secret of challenging Iran; neither have Iranian officials held back from blaming them for a recent uptick of violence on Iran’s borders, including the reemergence of a Kurdish insurgency on the western border with Iraq, and a spate of hit-and-run attacks by armed groups along the eastern border with Pakistan. More recently, former Saudi intelligence chief Turki bin Faisal embraced the Mojahedeen Khalq , a cultish Iranian opposition group in exile, calling on the group to overthrow the clerical regime in Iran.

With the Islamic Republic’s ongoing human rights abuses at home, and a geographically sparse country home to dozens of different ethnic and religious groups, there are certainly vulnerabilities to be exploited.

Which brings us back to the changes being implemented in Iran’s armed forces.

Historically, the IRGC and Artesh have not had the best of relationships. Formed in 1979 by the clerical elite to defend the nascent Islamic Republic, the IRGC is very much a manifestation of the revolution and subsequent war with Iraq: a collection of men and boys who just a few years prior might have been toiling on the fields or languishing in the shah’s jails, now collectively commanding a force of hundreds of thousands of ideologically committed fighters in a hugely destructive and bloody war. To this day, the IRGC shuns classical military doctrine, instead developing a brand of asymmetrical warfare entirely its own, based on popular mobilization and revolutionary ideals. Its operatives make great efforts to disassociate themselves from the bells and whistles of traditional military ceremony, preferring unshaven beards and loose-fitting, bland clothing to demonstrate their piety and rejection of the (Western) material world.

The Artesh, on the other hand, was left reeling by the revolution. A remnant of the ancien régime, the organization was viewed with deep suspicion by the clerical elite, who purged it of its best commanders and cut it off from its main beneficiary, the United States. The Artesh only played a peripheral role in the war with Iraq, denying it the ability to build a legacy to match that of the IRGC. To this day, the Artesh is nominally responsible for Iran’s domestic security, but it is the IRGC that patrols the borders, manages the ports, and oversees the vast popular mobilization groups and intelligence apparatus that keep the country under tight control.

This imbalance between the two forces has been addressed a number of times since the war, with an increasing number of joint IRGC-Artesh military exercises in recent years. But little literature on actual efforts of integration or assimilation exist. And while the IRGC has grown in military, economic, and political clout, the Artesh has been left underequipped and politically marginalized, despite maintaining a sizeable military force with an army, navy and air force. Its audacious push into the limelight earlier this year, by announcing the deployment of special forces to Syria, was left in ruins within days, after a number of soldiers were killed in a rebel ambush. The Artesh, struggling to explain itself, unceremoniously crawled back into the shadows, with little heard about its Syria operations since.