Why an Iran-Style Deal Isn't Possible with North Korea 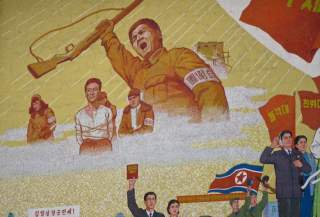 Foreign Policy reports that the Obama administration is considering sanctioning Chinese banks and firms that engage in business with North Korea. Given China’s centrality to the North Korean economy—it accounts for an estimated 90 percent of the regime’s trade—the logic is understandable. S­ome observers believe that “secondary sanctions” of this nature played a role in bringing Iran to the negotiating table in recent years and, ultimately, in laying the foundation for the landmark nuclear accord that was signed last July. Whatever one’s assessment of that conclusion—detractors contend that Hassan Rouhani and the reform-minded coalition he assembled would have engaged in talks even without the intensification of sanctions—the analogy between North Korea and Iran is problematic, for at least three reasons. While they have been widely noted, it bears repeating them briefly to lay the foundation for the remainder of the piece.

First, Iran is considerably more integrated into the world economy and, consequently, more likely to be affected by sanctions, whether the United States pursues them unilaterally or multilaterally, under the auspices of the UN Security Council. North Korea experts John Park and James Walsh explain in a recent report that due to “the global nature of oil sales and Iran’s close ties to the international financial system, Tehran was vulnerable to the application of targeted sanctions.” On the other hand, North Korea’s “onshore accounts inside of the Chinese national economy place them largely outside of the reach of financial sanctions related to SWIFT and other mechanisms.”  Perversely, and counterintuitively, the regime’s isolation and impoverishment amplify the diplomatic leverage it derives from its nuclear weapons.

Second, unlike Iran, which plays an important role in the world economy—it has the fourth-largest proven crude oil reserves and second-largest natural gas reserves—North Korea would likely be consigned to strategic irrelevance without its nuclear program. As such, it is difficult to imagine a set of conditions under which the regime would scale back, let alone eliminate, that program, which it frames as its only defense against U.S. military action. In May 2003, the government contended that the “bloody lesson of the war in Iraq…is that only when a country has physical deterrent forces and massive military deterrent forces that are capable of overwhelmingly defeating any attack by state-of-the-art weapons, can it prevent war and defend its independence and national security.”  In March 2011, an official with the North Korean Foreign Ministry concluded that “Libya’s giving up its nuclear arms…was used as an invasion tactic to disarm the country by sugarcoating it with words like ‘the guaranteeing of security’ and ‘the bettering of relations.’” More recently, it has adduced South Korea’s decision to deploy THAAD, a U.S.-constructed anti-ballistic missile defense system, as further justification for its nuclear pursuits—even though, as Chinese international affairs scholar Shen Dingli notes, “North Korea does not face immediate military threats” and “THAAD cannot defend Seoul from attacks of the more destructive conventional weapons from North Korea.”

Finally, whereas persistent U.S. diplomacy with Iran has accrued significant dividends, it has largely produced disappointments in the North Korean case. Indeed, a well-established, essentially five-step sequence has characterized the regime’s interactions with the United States for nearly a quarter century: it takes a step that the United States deems provocative; the United States imposes additional unilateral sanctions and calls for more punitive UNSC resolutions; both sides come to the table and engage in negotiations that yield little progress; another crisis erupts; and the pattern repeats itself. Over the course of these cycles, North Korea has become a de facto nuclear-weapons state.

The good news is that its nuclear program has yet to reach the threshold at which the United States would conclude that the net strategic benefits of pursuing regime change are greater than or equal to those of continuing with containment. The bad news is that, under the current leader, it is approaching that boundary. Kim Jong-un has authorized three nuclear tests, and an increase in activity at its Punggye-ri test site could signal preparations for another. He has also overseen 49 missile tests, with 21 taking place this year alone. According to nonproliferation expert Siegfried Hecker, North Korea could have twenty bombs’ worth of fissile material by year’s end, with the capacity to produce seven additional weapons annually going forward.  Finally, the regime is making steady progress towards miniaturizing a warhead that can be mated to an intercontinental ballistic missile.

Largely because of this last development, the discussion in Washington and Seoul has shifted rapidly this year. A report last month by an independent Council on Foreign Relations task force concluded that “North Korea’s accelerating nuclear and missile programs pose a grave and expanding threat to the territory of U.S. allies, to U.S. personnel stationed in the region, and to the continental United States.” More recently, the South Korean Foreign Ministry stated that it is in talks with the Pentagon “over a possible preemptive strike against North Korea…in case of an imminent nuclear attack by the North.”

These escalatory dynamics highlight a troubling possibility—the security equivalent of what statisticians call a regression discontinuity (RD). The essence of that phenomenon is that for individuals just below and above a predetermined threshold, any difference in outcomes they experience can be causally attributed to the existence of that demarcation.

Intuition would suggest that North Korea’s deterrence capacity would increase in rough proportion to the sophistication of its nuclear program. If the United States believes that that program is being developed principally for defensive purposes, as the regime routinely avows, that conclusion is reasonable. If, however, it believes that North Korea is preparing to launch preemptive strikes—against U.S. military installations and, in time, the U.S. homeland—the judgment may not hold. In the latter case, the deterrence capacity of North Korea’s nuclear program would increase up until the aforementioned threshold, but decline precipitously afterward.

The RD analogy is limited, however, in at least one crucial respect. In statistical contexts, the threshold is known in advance by all parties. In the case under consideration, it is a moving target established by mutual uncertainty about strategic perceptions, which is itself an ever-changing phenomenon. While the United States and North Korea both appreciate that they are coming closer to the point of no return, neither side can know a priori precisely when it will arrive or what the precipitant will be; as such, North Korea’s continued nuclearization represents an increasingly risky exercise in conjecture. Foreign affairs journalist Max Fisher observes that the regime must increasingly confront two choices: “maintain a weak, isolated government that would otherwise succumb to the forces of history,” or, far worse, “stave off…invasion or collapse.” It increasingly appears to be preparing for the latter, a possibility that has ominous implications not only for the maintenance of Asian-Pacific stability, but also for the preservation of world order.