Why Iran's Past Nuclear Actions Matter 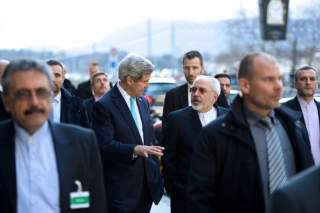 It would be fair to say that the past year-and-a-half of nuclear talks with Iran has not been America’s finest negotiating hour. But even by the comparatively low standards of U.S. diplomacy to date, the collapse of the American position in recent days has been nothing short of breathtaking.

Roughly a week ago, the White House began walking back the dog on the issue of PMDs: the “possible military dimensions” of Iran’s nuclear effort that have been carried out so far by the regime in Tehran. That topic has been hotly debated for years, and the International Atomic Energy Agency (IAEA), the UN’s nuclear watchdog, has identified nearly a dozen potential PMD activities—ranging from bomb designs to the development of nuclear detonators—that Iran needs to explain fully. So far, however, the Islamic Republic has done nothing of the sort, as the IAEA itself complained publicly back in March.

Until very recently, this lapse was considered a very big deal. Just this spring, Secretary of State John Kerry was still insisting that Iran’s disclosure of its past military-related atomic activities was an ironclad requirement for any sort of agreement with Tehran. Now, however, America’s chief diplomat is singing a decidedly different tune.

“We’re not fixated on Iran specifically accounting for what they did at one point in time or another,” Kerry said in recent recorded comments to reporters. Rather, he now insists, the administration is comfortable with what it knows about Iran’s past nuclear practices, and now is simply concerned about future nuclear work. Moreover, according to Kerry, any concerns we may have on the matter are misplaced. “The possible military dimensions, frankly, gets distorted a little bit in some of the discussion,” he reassured his viewers.

But the reversal isn’t an incidental issue, no matter what the White House would have us believe. The question of Iran’s previous—and possibly current—military-related nuclear work goes to the heart of Western concerns over the intent of Iran’s effort: namely, that it represents a path to the “bomb.” Simply put, knowing as much as we can about how far Iran’s work in this arena has progressed, and which processes are still underway (or could be restarted in short order) is essential to truly understanding the distance Iran still has to travel in order to attain nuclear status.

The question is especially important given the likely gaps in oversight of the emerging deal. True, the United States and the other P5+1 powers have declared that Iran’s nuclear program needs to be subject to a comprehensive inspections and monitoring regime. But Iran’s leaders have ruled out that possibility, instead offering a much more modest model of “managed access,” under which inspectors will only gain access to specific, agreed-to facilities—and then only after a lengthy delay (during which Iran will no doubt clean up all offending nuclear work).

Moreover, numerous Iranian officials have explicitly ruled out the possibility of Western inspectors being allowed into military sites. That in and of itself represents a colossal impediment to real oversight, because a third or more of Iran’s nuclear program is estimated to be co-located with the regime's military facilities.

Whether the P5+1 powers accept such a scaled-back model remains to be seen. France, for example, has preemptively declared that no deal is possible without Western access to Iranian military installations. But it’s not at all clear that the White House will back the French government on this issue. As a result, the smart money is on the deal that is ultimately concluded between Iran and the West containing less, rather than more, oversight of the Islamic Republic’s nuclear activities.

With just days to go until the declared June 30 deadline for an agreement, Western negotiators are under enormous pressure to conclude some sort of compromise with Iran. As a result, they appear more and more flexible on long-standing requirements that were once deemed essential to curbing Iran’s nuclear menace. All of which suggests that, at least as far as Iran is concerned, American diplomacy has been very good indeed.