Why Iran's Shia Threat Is Very Real for Faraway Egyptians 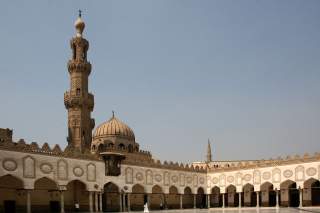 One of the most powerful leaders in the Salafist movement in Egypt often holds court in his well-appointed apartment in Alexandria. On a recent December evening, the sun was about to set outside his window over the massive billboard of President Abdel Fattah el-Sisi in the neighborhood of dilapidated and congested streets known as home to many of the country’s influential Salafist voices.

The Salafis are Islamists who yearn to practice the faith the way they think it existed at the time of the prophet Muhammad, 1,400 years ago. They are nearly the only Islamists in Egypt who are neither dead nor in prison, in large part due to their shared views with el-Sisi—not least among them the belief that Shia Muslims have deviated from Islamic tradition and are attempting to convert Sunni Egyptians to follow in their footsteps.

Inside one of the neighborhood apartment buildings, I met Abdel Moneim el-Shahat, a Salafist leader who has been at the forefront of a campaign in Egypt aimed at keeping Shia Muslims out of the country and confronting those Sunnis, particularly the youth, who dare to convert to Shiism. I traveled to Egypt to meet Salafis, like el-Shahat, to show how the Shia-Sunni divide has reached even a country where less than 1 percent of the population is Shia, according to statistics from the U.S. State Department. The sectarian conflict in the Middle East—most acute in Iraq and Syria—has now reached all corners, even in the most unlikely of places.

Over four years, I have researched the contours of Islam’s sectarian conflict—from the ground to the Twittersphere—to try to understand the causes. A few regional trends are clear: the Salafi leader tweeting in Saudi Arabia with fourteen million Twitter followers clearly shapes the views of someone like Shahat, whom he does not know. The wars in Syria and Iraq—perceived to be driven by Shia Iran’s hegemonic ambitions in the Arab world—also frame the narrative the Sunnis throughout the region use to bolster their argument that if the Islamic Republic of Iran had its way, the government would rule every Sunni-dominated Arab country. This fear has reached new heights in recent years, after Iran’s Islamic Revolutionary Guards, the most militant part of the state’s security apparatus, became heavily involved in Iraq, Syria and Yemen.

“The Dawa Salafiyya,” a particular trend in the movement that opposes violence, “has taken up the issue of the Shia to deal with religious minorities in Islam and outside Islam that have deviated from the tradition,” explained el-Shahat, who, at first glance appears a bit frightening with his long beard and stocky frame, but is actually an affable man. “For Iran, the religious and political perspectives are one in the same. They want to create their [Persian] empire again and that means spreading Shiism.” Its

The commonly accepted view holds that rising sectarian tensions in general, and those between Shiite Iran and Sunni Saudi Arabia in particular, are driven primarily, or even solely, by political and geopolitical interests and concerns. As a result, the crucial religious component is downplayed or dismissed outright, leaving Western policymakers ill-equipped to respond to local and regional crises in any constructive way.

Yet this consensus flies in the face of my own experience working, living and traveling in the region over the past thirty years. Rather, the Sunnis see the Shia’s primary motivation as tied directly to their theology, and that any political gain in the process is an added bonus. This is the widespread belief among Sunnis across the Middle East, from Syria and Lebanon to Yemen. This point is well documented in my recent book, published in December: The New Sectarianism: The Arab Uprisings and the Shi’a-Sunni Divide (Oxford University Press).

Although the Shia-Sunni divide has persisted for centuries, the Arab uprisings dramatically escalated the conflict for several reasons.

First and foremost, religious identity has become more relevant to Arabs than in recent decades. The notion of citizenship—being an Iraqi or a Syrian—became less important, due in part to the virtual collapse of states and governments. Second, the political leadership of Shia Iran and its Sunni neighbors, chiefly Saudi Arabia, have openly fanned the flames of sectarian rivalry in their pursuit of power and territory.

In addition, instability and polarization in the region breed a lack of religious freedom. And in a country like Egypt, all freedoms have been curtailed since the uprisings began, the first of which occurred in January 2011 and led to the overthrow of President Hosni Mubarak.

“In this sense, the Shi’a community illustrates the nature of the barriers to the exercise of freedom of religion and belief more generally, for other sects, the wider citizenry, and even the Sunni majority itself,” wrote Amr Ezzat, who has been studying the problem in Egypt for the last few years. “It also sheds light on the problematic issue of diversity within Islam, especially in the case of the Sunni-Shi’a divide, which is a special case of intra-Islamic diversity because it is linked to disputes over models of (religious) authority and their legitimacy.”

In Egypt, the Salafis and religious scholars at Al Azhar, a 1,100-year-old university complex and mosque and the historic seat of learning for Sunni Islam, share the belief that there is a Shia “threat.” Azhari scholars are considered among the most authoritative on religious matters. But some differ over whether the Shia are real Muslims.

By contrast, many influential Salafis in Saudi Arabia, some of whom have millions of Twitter followers, believe the Shia are not Muslims because they departed from central tenets of the faith. While most religious leaders in Egypt speak of the Shia as “deviators” from the Islamic sources—the Koran and sunna, the teachings of the prophet Muhammad—a minority goes further and declares them kuffar, or unbelievers. Extremist groups such as the Islamic State also share the view that the Shia are unbelievers, which is the justification the group uses to kill them in Iraq and Syria. Sunni extremists cite what they say is Koranic injunction to kill unbelievers.

The Egyptian government—not only el-Sisi, but the security apparatus as a whole—are also concerned about Iran’s influence in the country and the region, and, by extension, its Shia influence. “If I put myself in the government’s shoes, I can understand where the worry is coming from,” said Ezzat, sitting in his office in Garden City, an unusually quiet neighborhood in downtown Cairo. As part of his research, Ezzat has documented the conversions of Sunnis in Egypt to Shiism. “A lot of people since 2011 [when the Egyptian uprising began] joined the Shia, and they are mostly youth. They call into satellite channels and declare themselves Shia. They go to Lebanon and attend a university that is affiliated with Hezbollah,” the powerful Shia party and militia, he said.

Sitting in a Costa Coffee shop in Alexandria, a young scholar affiliated with Al Azhar explained: “The Shia did not change from the past. They want to kill the Sunnis to get closer to God,” said the scholar, who wished to remain unidentified.

So what are the theological differences that cause the Sunnis to believe the Shia are either deviators or unbelievers? First and most importantly, some Shia have stated in the past that the companions of the Prophet during his lifetime became apostates after his death. The Sunnis hold the companions of the Prophet in high esteem and even chose one, Abu Bakr, to be his successor. Abu Bakr became the first caliph after Muhammad’s death; his daughter, Aisha, was one of the Prophet’s wives. This led to the eventual split in Islam: the Shia believed the Prophet’s rightful successor should be from his bloodline.

The second reason the Sunnis view the Shia with suspicion concerns the figure of Aisha herself. Some Shia believe she committed adultery while married to the Prophet. The Koran states she did not have extramarital affairs. Thus, the Sunnis believe that anyone who doubts the Koran, on this as on any other point, is an apostate.

Third, the Shia and Sunni differ over supreme religious authority. The Shia developed a complex and ambivalent view of relations between religion and the state. By contrast, among the Sunnis, support for the ruler, even if he is corrupt or unjust, represents a religious obligation grounded in the Koranic injunction to obey “those who have been given authority among you.” But the Shia believe in the doctrine of the imamate—the recognized authority over all aspects of Shia community life by the direct heirs to the Prophet Muhammad, beginning with his son-in-law, Ali ibn Abi Talib, known among them as the First Imam. According to the Shia texts, Ali and his ten successors were killed by agents of the rival Sunni caliphs.

The Shia believe that their last representative on earth, who had divine and direct powers from God, went into hiding. They call him the Hidden Imam, and believe he will return to earth one day to save the Shia and create world peace.

As one Salafist intellectual explained, sitting in his home in Alexandria, waiting for the Hidden Imam is considered an affront to the essence of the Sunni tradition. “This is the utmost [evidence] of being lost,” said Bassam Al-Zarka, a dignified scholar and Salafist leader. “After Muhammad died on earth, no one else is authorized to speak for God. But the Shia believe the supreme leader of Iran has divine powers and they believe that, if the Hidden Imam appeared, he would speak for God.” But Al-Zarka does not believe the Shia are unbelievers; he says they have “deviated” but should be excused because they act in ignorance of the Islamic texts.