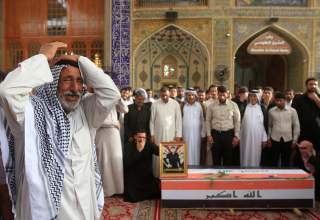 Bartle Bull sits on the Visiting Committee of the Metropolitan Museum of Art’s Department of Ancient Near Eastern Art. His next book is a history of Iraq. He is a founder of NGP, Iraq’s leading merchant bank.

Image: A man reacts near the coffin of a member of Iraqi security forces, who was killed during clashes in Mosul, at his funeral in Najaf, Iraq June 22, 2017. REUTERS/Alaa Al-Marjani