ISIS Can be Contained 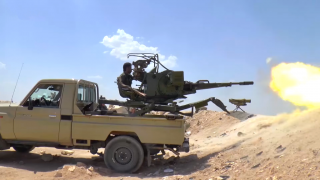 Two years in, the Obama administration’s strategy to “degrade and ultimately destroy” the Islamic State in Iraq and Syria (ISIS) has been criticized for its overall failure to articulate an ideal end state, especially for Syria. Despite a kill-ratio of “15,000-to-1,” tactical gains have not translated into strategic success. Critics contend that current efforts to defeat ISIS are unsustainable and ill-conceived given the half-measures employed. Yet, the more salient but neglected issue is what happens after the group’s demise. Even if ISIS is defeated, the cost of stabilizing former ISIS-controlled areas promises to outweigh the current commitment to destroy the group both in blood and treasure.

Indeed, in a region rife with sectarian conflict and poor governance, the rise of ISIS is a manifestation of state-failure in Syria and Iraq. This reality presents policymakers with a stark dilemma. Dislodging ISIS from Syria would only reopen a power vacuum that could possibly be filled by worse alternatives, but vacillating on ISIS would result in the caliphate's institutions becoming more entrenched and a rogue state more likely. With the growing certainty of Mosul’s liberation, the world optimistically anticipates Raqqa to be next.

But can Raqqa be the second Mosul? Given the complexity of the Syrian conflict, it is all the more necessary to reevaluate this strategy of annihilation which has dominated the policy discourse. Instead, a strategy of containment would seek to contest the fundamental nature of ISIS’ worldview by throwing down the gauntlet of de facto (but not de jure) statehood. Paralleling George Kennan’s 1947 formulation, containing ISIS in the Middle East today would recognize the multi-generational nature of this conflict and patiently maintain the territorial status quo against the group. Contra the preferred goal of driving ISIS out of Raqqa, containment challenges the group’s ideology by permitting it to run its full course and be found wanting in its areas of control. Two pathways are possible under this strategy. Licking its battle wounds, ISIS would either seek to re-consolidate its territorial control and moderate itself, or it would, in its revolutionary fervor, continue the struggle, thereby putting it at risk of implosion.

Granted, there are valid reasons to degrade ISIS, but our analysis of interview data collected in Iraqi Kurdistan and along the Syrian border in southern Turkey present a more complicated picture of the situation in ISIS-controlled areas. These interviews were conducted with Iraqi and Syrian refugees, local NGOs and academicians, Turkish police officers, Peshmerga commanders and security officers over a course of five months from 2015 to 2016. The public rhetoric has correctly portrayed the group as fanatical and thus deserving of destruction, but our research on the internal organization of ISIS highlights three inconvenient truths which make containment of the group in Raqqa not just possible, but also desirable.

Contrary to the media’s portrayal, ISIS’ capacity as a proto-state is more resilient than we would like to believe, especially when considered through the lens of gender. Compared to al-Qaeda or the Taliban, the group’s countenancing of female involvement is unprecedented. In line with classical Islamic jurisprudence that forbids female participation in offensive jihad, ISIS initially rejected female participation during its military conquest. Upon assuming a state building role since 2014, ISIS has however adapted its theological justifications with the establishment of gender-segregated institutions to involve more women in its caliphate-building project. In an about-face from its initial restrictions, women are now playing an increasingly important role in the group’s state-like functions.

“It came to us as a surprise when ISIS did not ban women to continue working at schools and hospitals unlike the Taliban,” said a former resident of Raqqa who now lives in Sanliurfa, Turkey. Another refugee who fled Raqqa to Istanbul recounted that female doctors and nurses were still allowed to work in Raqqa General Hospital. Besides health care, women have also been employed in the police, military, education, and charity institutions. A Syrian refugee shared that her daughter’s elementary school was fully run by a principal, teachers and cleaners who were female. “Teachers who were previously working at schools were instructed to continue their jobs though they came under new rules and regulations especially in terms of the dress code and teaching curriculum,” averred the former resident of Raqqa and mother to an elementary schoolgirl. In short, fundamentalists can strive for theological consistency, but governors must be responsible. ISIS has readily adapted to the challenging ground conditions in a pragmatic bid to preserve itself.

Responsiveness to Developments from Within & Without

Although ISIS is far from a paragon of good governance, its control and administration of a territory does require a degree of social support or acquiescence from the general population. ISIS has gained a reputation as a fanatical organization with zero tolerance for dissent and infractions, but the empirical record is more mixed. The dissent of a group of female doctors at Mosul’s Ibn Sina hospital in 2014 is instructive. Through an open letter, the group lamented the restrictive regulations imposed by ISIS on hospitals and explained their decision for going on strike. This strike eventually pressured ISIS to reduce its onerous restrictions. Reflecting on that incident, a former resident of Mosul noted that, “Since the strike, it was easier for women to access female doctors in the hospital. We could take off our veils while visiting the doctor without the fear of being caught.” Thus, ISIS, as an occupying force that administers territory, has remained calculated and flexible in its approach to avoid alienating all sectors of the population.

Besides being responsive to domestic developments, the group also keeps a close watch on external ones. In 2015, the ISIS leader, Abu Bakr al-Baghdadi, reportedly urged his followers to temper the graphic nature of their propaganda videos. Sensing that many people abroad have found their videos repulsive, al-Baghdadi has sought to remedy the counterproductive nature of their outreach. Furthermore, the fact that Israel has thus far not been attacked by any ISIS-affiliate underscores the fact that, despite ISIS’ anti-Zionist rhetoric, the group can be deterred if the prospect of retaliation is appropriately signaled to it. These examples demonstrate ISIS’ propensity for pragmatism as it seeks to maintain its tenuous proto-statehood and shore up its legitimacy among both domestic and external audiences.

Finally, by imposing order in areas where the rule of law has lapsed, ISIS has gained the support of disgruntled Sunni populations in Iraq and Syria. This power vacuum has been filled by Islamic courts (al-Mahkamah al-Islamiah) whose legal judgements are enforced by the religious police (hisbah). “Although ISIS is brutal, they act quickly and with no discrimination. There was no need to bribe them like Assad’s people,” said a former resident of Raqqa. These Islamic courts have provided general judgments based on sharia and even received complaints against ISIS soldiers. There is evidence indicating several ISIS fighters were convicted in these courts for stealing and looting and were beheaded later on.

Public executions, lashings or cutting off limbs would strike many as barbaric. While morally repugnant, it bears mention that, comparatively, such punishments are similar to those in countries such as Saudi Arabia and Iran. More crucially, the implementation of sharia by ISIS has been welcomed by many marginalized Iraqis and Syrians. The group’s use of Islamic law serves not only to instill fear among non-Muslims, but also to “establish a social contract” with the Muslim inhabitants in their territory. A shopkeeper who had fled Syria in April 2016 (due to intensifying Russian airstrikes) pointed out that crime had decreased while he was still in ISIS-controlled Raqqa: “Since ISIS was executing sharia law fast and without exception, criminals did not dare to show up. I could afford to leave my shop unattended for daily prayer in the mosque.”

The Day After ISIS?

The aforementioned truths complicate the planning assumptions of our current strategy against ISIS. The sad reality is that ISIS’ opponents are in a marriage of convenience which is likely to descend into internecine war as soon as ISIS is out of the picture. Otherwise stated, ISIS is mitigating tensions within the coalition. Absent a functioning and legitimate central government in Syria, the day after ISIS bodes ominously. With Mosul’s expected liberation, it would be foolhardy to briskly confront ISIS in Syria because the group will then be fittingly surrounded by ethnically distinct rivals—both state (Turkey, Iraq, Assad’s regime) and non-state (Kurdish forces, rival Sunni groups, Iranian- and Russian-backed militants) actors.

The hallmark of a containment strategy would be the grudging acceptance of key ISIS strongholds in Syria, especially its capital city of Raqqa, for the time being. While maintaining the territorial status quo, efforts should be made to facilitate an inclusive and unified political platform among moderate Islamist groups fighting in Syria. More than tactical unity to assail a common enemy, a political vision for Syria is an imperative. Stabilizing existing borders would allow anti-ISIS parties to consolidate their existing territorial gains, thereby forming a stronger bulwark against ISIS expansionism as they are given the opportunity to administer their own areas. An example of this would be the Makhmur front in Iraq between ISIS and the Kurdish Regional Government (KRG). While unofficial, this existence of a de facto ceasefire is suggestive of its feasibility writ large.