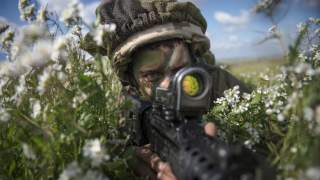 IN THE wake of the Orlando and Istanbul attacks, President Obama reiterated his determination to “destroy” ISIS by executing a strategy that combines air strikes, American special-operations units and support for local ground forces. Both of the candidates campaigning to succeed him insist that the United States must do more: Donald Trump advocates that Washington “bomb the hell out of” the group, while Hillary Clinton promises to “smash the would-be caliphate.” All three, however, are in violent agreement on one point: the overriding objective must be to destroy ISIS.

The insistence on the “destruction” of ISIS has become such a reflexive linchpin of America’s counterterrorism project that few pause to consider its strategic merit. But the nation with arguably the most experience and success combatting terrorism has considered it—and found it wanting.

Israelis live much closer to ISIS than do Americans. ISIS has pledged to conquer the Jewish state and incorporate it into its core caliphate. Yet surprisingly, the Israel Defense Forces (IDF) has rejected the option of taking the fight directly to ISIS. Instead, faced with an operational threat that could mean the death of hundreds of Israelis at any moment, it has embraced a strategy that has not even been on the U.S. policy menu. Adopting a page from the playbook the United States used to defeat revolutionary Soviet-led communism in the Cold War, Israel is preventing ISIS attacks through a strategy of patient, vigilant deterrence. Obviously, the United States cannot simply adopt the Israeli approach whole cloth. It operates in a different security environment than the Jewish state, which faces a multiplicity of terrorist threats on its borders. But there are important lessons that America can learn to enhance its national security.

Israel’s approach to ISIS is straightforward. Israel seeks to persuade ISIS not to attack it by credibly threatening to retaliate. If you attack us, the thinking goes, we will respond in ways that will impose pain that exceeds any gain you can hope to achieve. As Cold War strategists learned, making this work in practice is demanding. To be effective, deterrence requires three Cs: clarity, capability and credibility. Specifically, this means clarity about the red line that cannot be crossed, communicated in language the adversary understands; capability to impose costs that greatly exceed the benefits; and credibility about the willingness to do so. Failures occur when the deterrer falls short on any one of the three Cs. So, if I draw a red line, you cross it, and I respond with words rather than the decisive punishment threatened, I fail the third C. Whatever excuse I give for not executing my threat, and however earnest my claim that next time will be different, the blunt fact is that adversaries will find my threats less credible.

If that were not enough, as the great nuclear strategist Thomas Schelling taught us, successful deterrence requires more than just a threat. The flip side of the deterrence coin is an equivalent promise: if you refrain from the prohibited action, I will withhold the threatened punishment. If, for whatever reason, I decide to administer the specified punishment even though you have complied with my demands, I spend that coin—and can no longer use that threat to deter you. As the saying goes, if you’re damned if you do and damned if you don’t—you might as well do.

The suggestion that terrorists as vicious as ISIS could be deterred is routinely dismissed by most members of the U.S. policy community as silly or dangerously naïve. Some assert that terrorists just want to kill. Others argue that they are irrational and that, when facing adversaries who are prepared to die for their cause, threatening to kill them will have no effect. American strategists have also been traumatized by Al Qaeda’s attack on the World Trade Center and Pentagon. Imagine a responsible government knew that it was facing hostile terrorists who had the capability to conduct an attack that could kill hundreds. If it chose to counter that threat by attempting to deter, rather than preemptively attack, the adversary, how would that government justify itself to its citizens in the aftermath of another Paris-scale assault?

ISRAELI STRATEGISTS ask all of these questions—and struggle with uncomfortable solutions. They have concluded that, however imperfect, deterrence is the best option. Indeed, the IDF believes that it is successfully deterring adversaries along all azimuths: states (Iran, Lebanon and Syria), substates (Hezbollah and Hamas) and even terrorist organizations (ISIS, Palestinian Islamic Jihad and Al Qaeda–linked groups). Israeli strategists reject the consensus view in Washington that ISIS is an ominous threat to “the entire civilized world.” In contrast to President Obama’s argument that ISIS should be the “top priority” for the IDF, it is just one more terrorist group—one that does not even make the top half of Israel’s threat matrix. As former chief of military intelligence Amos Yadlin provocatively put it, “At the end of the day, we are talking about several thousand unrestrained terrorists riding pickup trucks and firing with Kalashnikovs and machine guns.”

The American counterterrorism debate has largely ignored Israeli calculus. Washington is generally averse to learning from others, and Israel’s security establishment, until recently, was reticent about revealing its thinking. That changed last August when, for the first time in the IDF’s history, Chief of General Staff Lt. Gen. Gadi Eizenkot published an unclassified version of the IDF defense doctrine. But because the document appeared only in Hebrew, it has remained largely unknown in the American strategic community. To make it accessible, Harvard Kennedy School’s Belfer Center for Science and International Affairs recently posted an English translation of the document.

The “IDF Strategy” document discusses in detail how to deter terrorist groups, specifically Hezbollah and Hamas. In the U.S. policy lexicon, Hezbollah and Hamas are labeled “terrorists.” The IDF calls them “substate organizations.” Substate actors have headquarters, hold territory and govern populations. Thus they present targets of value, making them vulnerable, like states, to a combination of “general deterrence” and “specific deterrence.” General deterrence is achieved by maintaining overwhelming military superiority and earning a reputation like that of the Godfather. The Godfather “takes everything personal.” As his consigliere observed, “If a bolt of lightning hit a friend of his the old man would take it personal. . . . Accidents don’t happen to people who take accidents as a personal insult.” In Eizenkot’s words, Israel must be seen as “an unpredictable enemy that can react in a very severe way.”

Specific deterrence is tailored to each enemy and focuses on particular actions. It requires “an ongoing analysis of the enemy’s characteristics, considerations, capabilities, identity, and decision making processes.” Israel seeks to influence the “calculations” of its enemies directly by persuading them of “the futility of continuing to fight” and reminding them of the “outcome of previous confrontations.”

The IDF constantly worries about whether its deterrent is sufficiently strong. It works daily to ensure that it meets each and every condition required for success. Red lines are clearly, publicly and repeatedly announced by top Israeli officials not only in Hebrew, but also in Arabic. Israel’s capability to enforce these red lines is demonstrated by “building a force that is partially visible to the enemy.” Credibility is enhanced by taking “limited offensive actions to signal that the ‘rules of the game’ have been broken.” And it is careful to withhold punishment otherwise. (Indeed, Israeli policymakers have occasionally chosen not only to avoid punishment but to reward good behavior, for example, in supporting the reconstruction of Gaza even though Hamas uses some of the material Israel supplies to build tunnels and rockets.)

Israel sees Hezbollah as the “most severe threat.” A proxy of Iran, it has assembled an arsenal of more than one hundred thousand missiles and rockets aimed at Israel—many of them precision-guided with the ability to hit strategic targets, including the equivalent of the Pentagon in Tel Aviv. Hamas, whose charter pledges to “raise the banner of Allah over every inch of Palestine” occupied by “warmongering Jews,” stands second among substates whose attacks must be deterred. It has fought three wars against Israel in the past decade. During the Second Intifada, Hamas perfected the suicide bomb and used it to kill hundreds of Israeli civilians. Today, the group has thousands of rockets and is burrowing tunnels into Israeli territory for future attacks. (Israel has discovered a number of tunnels in recent months, each buried one hundred feet underground.)

How does the IDF meet threats posed by these groups? Not by direct attacks to degrade them; not by all-out war to destroy them. Instead, it attempts to deter them. As Yadlin explained,

“Vis-a-vis Hamas and Hezbollah, we haven’t destroyed their capabilities, but we were able to establish deterrence. And this is basically because we hit them hard, and because the terrorists became . . . half-state entities. . . . The terrorists have discovered that when they are responsible for their economy, for education, for the life of their people, suddenly they are not that daring to use terror all day.”