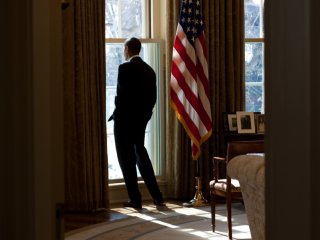 While rhetorically stirring, President Obama’s primetime Sunday evening remarks, in which he vowed to “eliminate ISIL,” lacked any substantive policy shifts in the wake of the San Bernardino shootings. Instead, he sought to re-assure the U.S. public that his approach to fighting Islamic State (ISIL) is the best option, despite acknowledgements from the Pentagon that ISIL had not been “contained,” as Obama had wrongly stated hours before the Paris attacks.

Obama, as Peter Beinart noted recently in a column in The Atlantic, tends to view the threat of ISIL differently than his Republican counterparts. In Obama’s view, while ISIL has indeed proved problematic, the organization’s threat to the security of the U.S. homeland remains minimal. So ISIL is Europe and the Middle East’s problem. This viewpoint has been consistently echoed in his approach to Syria and Iraq—treating Baghdad’s political challenges and Syria’s civil war and its effects as problems that he may have underestimated, but not ones that merit any deep policy commitment from the U.S.

For a president who has been determined to end wars in the region, sustained engagement in Syria and Iraq were never priorities and, as a result, Obama has been more focused on playing defense on ISIL than offense. It’s not surprising, then, that the only real addition to the president’s speech on Sunday was the awkward furniture arrangement of his Oval Office.

However, while a strong case can be made for steps that could have been taken since 2011 by President Obama to curtail the rise of ISIL, the path forward is strategically and politically murky. As rhetorically reassuring it may sound for the entire Republican presidential field to vow to eliminate ISIL, none of the candidates has presented a clear politically feasible strategy so far. Hillary Clinton, the Democrat frontrunner, gave a thoughtful assessment of the region and U.S. foreign policy in her address to the Saban Forum this past Sunday at the Brookings Institution, but her policy prescriptions remain vague.

In the broader think tank community, analysis has varied in terms of marrying feasibility with politics. The American Enterprise Institute recently published the most comprehensive anti-ISIL strategy to date, in collaboration with the Institute for the Study of War. While a number of elements of the strategy are cogent, it’s unclear whether either President Obama or his potential successors will assume the political risk of adopting them.

If they do, they risk committing the U.S. into an open-ended strategy with an end goal that isn’t fiscally, strategically or politically sustainable. As much as Washington has tried to use its diplomatic and military tools to support regional states and parties in these states to resolve conflicts and deny ISIL a safe haven, there’s also a limit to what the U.S. can realistically do in these situations.

Politically, while recent American public opinion polls show disapproval for how the President is handling the situation and growing support for the U.S. to send ground forces to fight ISIL, a majority of Democrats polled do not support such an option. It’s unlikely then that either Obama or a future President Clinton would take such action. Obama has been even reluctant to support a proposal by the late Chairman of the Joint Chiefs, General Martin Dempsey, which advocated establishing light footprint bases across the Middle East, South Asia and Africa to enhance intelligence gathering.

Would a President Clinton or President Rubio or Cruz (or Trump for that matter) deeply expand the U.S.’s military commitment? Probably not. The most likely prospect is that a future administration will expand the training and equipping of local ground forces, expand the aerial campaign and deepen their engagement with regional partners.

A future administration will also likely attempt to exert more pressure on Iran, Russia and President Assad to come to a settlement on Syria. Assad arguably has the best window now to make a deal. If he and his patrons miss this chance, there’s no guarantee that a settlement would be as favorable as it is now.

On the face of it, then, counter-ISIL strategy going forward will not likely look drastically different (in absence of a substantial event such as another terrorist attack on the U.S. homeland) than the present strategy, for all of its flaws. Until a political settlement on Syria can be reached, ISIL will have a space to continue to operate. Even with a political settlement, it will be a challenge for any government in Damascus to both address ISIL and Al-Nusra.

It would also be mistaken to believe that the PYD and KRG Peshmerga will go beyond areas outside their own self-interest to defeat ISIL. The idea that these forces would be welcomed in Raqqa and the surrounding areas is a fantasy. The current Arab forces being trained are in no position to hold Raqqa without external support. Obama has failed to get a regional commitment to provide additional forces to support such an operation, but understandably, the politics of such a force are equally complex (as evidenced by Iraq’s response to Turkey’s training mission in northern Iraq).

In Iraq, the campaigns to retake Mosul and ISIL’s territories are still on the drawing boards. While political reform has started and stalled in Baghdad, the Iraqi army isn’t in any competent position to retake the remainder of Iraq. Equally so, Iran and its proxies haven’t made retaking the Sunni predominant territories in Iraq held by ISIL a top priority beyond their current campaigns. Beyond Iraq and Syria, his policies on countering ISIL in Libya look less promising.

With a year left in office, Obama has little time to improve the situation. Perhaps he could increase the pressure for Turkey to better manage its border, which is the main transit route for foreign jihadists. Such actions would strengthen U.S. efforts to cut the financial flow to ISIL. Equally, he can redouble his diplomatic efforts to push forward the Vienna process and to reach a better understanding with Russia on ISIL. He could expand the air campaign in cooperation with France and Britain—and, to a degree, with Moscow.

Upon leaving office, President Obama will be bequeath to his successor a challenge with few options, beyond pursuing more robustly the present course and rebuilding trust and improving relations with the U.S.’ allies in the region.