Why Isn't Iran at the Nuclear Security Summit? 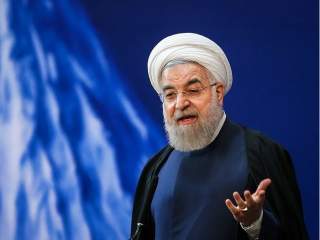 As the final Nuclear Security Summit begins in Washington this week, a country whose nuclear program has come in from the cold—Iran—is missing from the guest list, raising questions as to whether it should have been invited. What the United States and others once perceived as a sophisticated, controversial and illegitimate nuclear program has now been brought in line with international norms through last year’s historic deal, which turned the one-time nuclear outlier into a legitimate player whose presence at the summit could have strengthen international nuclear security.

The summit is the fourth of its kind; the United States hosted the inaugural 2010 summit in Washington, while the second and third summits were held in Seoul and The Hague in 2012 and 2014, respectively. Although the purpose of the summit is to prevent nuclear terrorism and to secure loose nuclear materials that could be used to develop nuclear weapons, its intentions and goals are within the spirit of the Joint Comprehensive Plan of Action (JCPOA) that is currently being implemented. The historic deal is directly improving international nuclear security by bringing a sophisticated nuclear program out of the shadows.

As an example, the interim agreement (the precursor to the deal) had Iran reduce its amount of dangerous nuclear materials by eliminating or converting its entire stockpile of 20 percent medium-enriched uranium. Under the JCPOA, Iran went further and reduced its stockpile of low-enriched uranium to fewer than three hundred kilograms, 2 percent of what it had been prior to the agreement. Relatedly, Iran has removed two-thirds of its centrifuges from its nuclear facilities. The JCPOA also blocked the plutonium path to nuclear weapons; Iran has removed the reactor core at the Arak facility and filled it with cement. The JCPOA keeps Iran from covertly pursuing enough fissile material for a weapon, by adopting the Additional Protocol and other transparency measures. These enhance the monitoring and verification of nuclear facilities, including through snap inspections, as well as enhancing oversight and accountability of the entire nuclear supply chain.

Not only is the JCPOA within the spirit of the summit, but by recognizing Iran’s nuclear program, its safety and security will be elevated through international nuclear cooperation, directly touching on the twin goals of this year’s summit: advancing tangible improvements in nuclear security behavior, and strengthening the global nuclear security architecture. Since the recognition of Iran’s right to a peaceful nuclear program, Tehran has been able to increasingly shift its attention to enhancing the safety and security of its nuclear infrastructure, an aim that would have been aided by its participation at this year’s summit. It is also in Iran’s interest to work cooperatively with others to combat any prospects for nuclear terrorism, particularly as parts of the Middle East are under siege by the so-called Islamic State, a threat right on Iran’s doorstep.

Iran is a signatory to the Non-Proliferation Treaty (NPT), unlike India, Israel and Pakistan, which are attending this year’s summit. If Iran were participating, there would be an chance to enhance the image of the global nonproliferation movement led by the Obama administration, presenting an opportunity to celebrate the Iran nuclear deal as a success, particularly in light of Republican presidential candidates’ vows to tear the agreement to shreds. Inviting Iran to attend this year’s summit would have also given the international community a timely opportunity to encourage Tehran and others who have yet to sign or ratify the Convention on the Physical Protection of Nuclear Material and the International Convention for the Suppression of Acts of Terrorism to do so.

There might be opposition in some corners of the Washington policy community, and in capitals such as Riyadh and Tel Aviv, to Iran attending the summit. After all, the United States officially labels Iran as a state sponsor of terror. But it is undeniable that since signing the original interim nuclear agreement in November 2013, Iran has stepped up to the plate as a responsible nuclear actor by fulfilling all of its commitments under the interim deal and, thus far, the JCPOA.

In light of this, failing to invite Iran to this year’s summit was a missed opportunity to promote the peaceful pursuit of nonproliferation and, by association, nuclear security.

Navid Hassibi is a Director at the Council on International Policy and a Non-Resident Fellow with the Nuclear Security Working Group. He tweets @navidhassibi and @theciponline. The views expressed here represent his own.