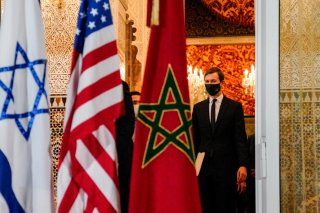 This Christmas season, relations have never been better between Jews and Muslims, between Israel and the Arab nations.

This is especially so in my country, Morocco, which hosted a visit with U.S. and Israeli officials this week—opening a new era of peace and shared prosperity between Morocco and Israel. Most importantly, a simple moment, between Israel’s national security adviser and Morocco’s king, electrified all of those present.

At a reception with King Mohammed VI at the royal palace in Rabat, Israel’s National Security Adviser Meir Ben-Shabbat spoke in a Moroccan dialect of Arabic. This immediately pleased Moroccan officials present, since it suggested a kind of linguistic kinship. Ben-Shabbat’s parents were born in Morocco.

Then, Ben-Shabbat formally addressed the king. “Allah Ybarek Fi Aamar Sidi” is the formula that Moroccan citizens have used for centuries to express their allegiance to the king of Morocco. By saying these words, Meir Ben-Shabbat conquered the hall.

It said many things at once. It was a warm acknowledgment of shared history, not just of Ben-Shabbat’s family, but of Jews and Muslims in Morocco. Indeed, archaeological and other evidence points to nearly 3,000 years of Jews living in Morocco, a presence long pre-dating the emergence of Islam. Moroccan Jews were predominantly rural, but over the centuries they participated in the construction of a plural culture that also included Berber, Arab, and Andalusian identities. So Ben-Shabbat’s words constituted a recognition of a long history of tolerance.

Some of that history was written in living memory. Moroccan Jews will never forget that, during World War II, King Mohammed V refused to round up or persecute Jews while Morocco was a French protectorate and Paris had fallen to the Nazis. (Other French colonies, protectorates, and possessions acted far less honorably.) His son, King Hassan II, is considered the main architect of the first peace agreement between Egypt and Israel. He personally paid for the upkeep of Jewish cemeteries.

And some of that tolerant history was just written. Morocco is the only Arab country whose constitution formally recognizes Judaism as an identity referent, alongside Muslim and Christian. That constitution was adopted by referendum in 2011.

As Ben-Shabbat’s words rang out, echoing so much unspoken but shared history, the room was won over and waited for the king’s answer.

The king, with the great elegance of a king that makes simple words profound, answered him in the Moroccan dialect and welcomed him to Morocco.

Historians will surely study this moment as a turning point, but also a returning point. It reveals every layer of Morocco history, the Jews, the Arabs, the Berbers, and many others. It announces a new peace between Morocco and Israel, but also a return to a centuries-old tolerance among diverse faiths and cultures.

It also heralds a return to the unifying role of the monarchy, an ancient institution, one that binds urban and rural, Jew and Muslim, rich and poor. Allegiance to the king is not an adherence to the decisions of a political leadership, but to the nation and its continuing values.

That a senior Israeli official pledged allegiance to King Mohammed VI is just the continuation of this eternal story of tolerance and diversity. Jews, Arabs, Amazighs, and others in Morocco have lived together for centuries, largely peacefully. This continuity makes Morocco a unique case. It is a symbolic invocation of history, a warmness upon which all real peace is built among peoples.

As you go about your holiday, think of this small yet significant scene from a palace on the Atlantic coast of Africa, and smile. Peace is breaking out.

Ahmed Charai is a Moroccan publisher. He is on the board of directors for the Atlantic Council, an international counselor of the Center for Strategic and International Studies, and a member of the Advisory Board of The Center for the National Interest in Washington and the global board of advisers of the Jerusalem Institute for Strategy and Security in Jerusalem.