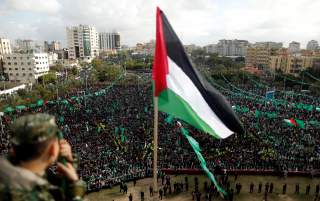 In light of the escalating tensions between Israel and Hamas, many have speculated as to why Israel has not used its military superiority to simply crush the terror organization. After all, Israel boasts what is arguably the strongest and most technologically advanced military in the Middle East. On the other hand, while Hamas is heavily armed and clear in its hostility, it is in no way capable of directly taking on the overwhelming firepower of the Israel Defense Forces. It cannot even pose an existential threat to the Jewish state or its vital interests via military means alone. At best, Hamas can disrupt the daily lives of civilians, particularly in the southern part of Israel, elevating the issue of Gaza to the top of Israel’s political agenda.

It is important to note that terrorist organizations like Hamas specifically attack civilians hoping that they can force governments into making political concessions. That is why Western-style democracies like Israel are particularly susceptible to the political effects of terrorism, as the resulting protests (often magnified by intensive media coverage) can create instability in democratic governments and societies. The controversy surrounding Israel’s response (or lack thereof) to the most recent escalation with Gaza has already brought about the resignation of Israel’s defense minister, Avigdor Lieberman, and has even threatened to bring about the downfall of the current governing coalition. In this regard, there is no doubt that despite its limited capabilities, Hamas has succeeded in creating a strategic threat to Israel. This further enhances the question, why doesn’t Israel exhaust its abilities to bring about the downfall of Hamas and to bring an end to this threat?

Notably, Israel feels that it lacks the legitimacy to utilize its full capabilities against Hamas, and this is largely due to concerns over its image in world public opinion. Although many foreign governments in the past have recognized Israel’s right to self-defense, it is a common demand from the international community that Israeli operations be proportional. In this kind of asymmetrical conflict, this means that Israel is not expected to use its full capabilities against Hamas. Additionally, there is high certainty that utilizing the full firepower of the Israel Defense Forces would necessarily bring about severe devastation to the Gaza Strip and its civilian population, as collateral damage is more or less unavoidable in such a densely populated environment. Furthermore, Hamas has always used innocent people as human shields in order to deter Israeli attacks. Although the world condemns this tactic, it is still clear that once a flood of pictures of the destruction in Gaza is shown on televisions around the world, worldwide criticism of Israel accompanied by an intense pressure to stop its attacks on Hamas will ensue.

Furthermore, utilizing military means to bring about the downfall of Hamas might lead to one of the following possible scenarios, all of which are highly dangerous to Israel’s national interests. The first scenario that is of particular concern to Israel is that should the Hamas regime fall, the Gaza Strip may collapse into a state of anarchy. With no central power to assume responsibility, small fanatical groups could carry out highly dangerous actions against Israel, and Israel would have no specific organization to retaliate against or negotiate with. To put it simply: while Israel can establish deterrence against terror organizations like Hamas; it cannot establish deterrence against the forces of anarchy.

Secondly, in the event that Hamas is removed from power in Gaza, Israel might again have to undertake the enormous responsibility of governing the Gaza Strip and its 2 million inhabitants in order to prevent the scenario of anarchy mentioned above. Without even mentioning the political and social stresses that this would entail, the strain on Israel from an economic standpoint in this scenario would be immense, as it would be in charge of ensuring the welfare and security of the Palestinian enclave. We also need to understand that the world has different expectations of Israel as a Western-style state whose citizens enjoy a high standard of living. Should Israel be forced to take responsibility in governing the Gaza Strip, it would be expected to provide the Palestinians there with the same high standard of living. Notably, the world has no similar expectations from Hamas; therefore, news about the suffering of the people of Gaza under Hamas rule seldom leads to criticism of the Hamas regime. Instead, the criticism is mostly directed towards Israel.

However, the control of Gaza by the Palestinian Authority also poses a much broader political threat to Israel. From the point of view of the present right-wing government in Israel, as long as Hamas is ruling over Gaza, the idea of a two-state solution can hardly be implemented. In the eyes of the current Israeli government, there is already a Palestinian state in Gaza, and any attempts to implement this solution would actually create two Palestinian states on both sides of Israel, with one being in Gaza and the other in the West Bank. Israel could never accept such a scenario, as it would pose grave risks to its national security. The international community, led by the United States, would likely accept this assessment as well. This is why many in the international community, including numerous states in the Middle East, are carrying out intensive efforts to unite the West Bank with the Gaza Strip, in order to ensure that those two regions would be controlled by one Palestinian state. Regardless, the present Israeli government views the establishment of a separate Palestinian state to be a serious threat, especially as it continues to grapple with broader regional threats.

There are growing anxieties in Israel over the situation on the northern border, as concerns are mounting that Israel may be heading towards a major military confrontation with Hezbollah, and possibly even Iran. It should be noted that compared to Hamas, Hezbollah and Iran pose a much greater strategic threat to Israel. Should Israel have to fight against Hezbollah and/or Iran in the north, it would be in Israel’s best interest to ensure that the southern border remains relatively calm, as Israel does not want to be engaged in major military confrontations on two fronts.

In recent years, Israel has managed to stop the transfer of sophisticated arms from Iran to Hezbollah by frequent attacks against caravans of arms shipments inside of Syria. However, ever since the downing of a Russian Ilyushin-20 aircraft in Syria and the death of all fifteen crew members onboard, tensions between Israel and Russia have been exacerbated. Therefore, under present circumstances, Israel’s ability to hit weapons shipments in Syria is limited in a way that it had not been before. In light of the growing threat in the north, it is in Israel’s vital interest to deescalate the fighting in Gaza so that it can meet any threat posed by Hezbollah or Iran.

Professor Zaki Shalom is a member of the research staff at the Institute for National Security Studies and the Ashkelon Academic College.

Jacob Aaron Collier is a research intern at the Institute for National Security Studies in Tel Aviv.