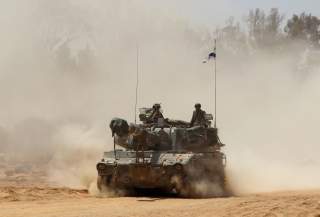 In a June 2017 article in the National Interest, I asserted that while Israel is militarily capable of destroying Hamas, in the absence of a viable alternative to the group’s control of Gaza, strategically it could not afford to do so. The recent flare-up along the border with Gaza, which escalated on May 29 into the most intense day since the large-scale fighting in the summer of 2014, makes this an opportune moment to revisit the issue. It is a reminder that another major engagement is a constant possibility and that there are those in Israel who would support retaking the Gaza strip and getting rid of Hamas.

In the original article, I put forward three categories of recommendations— military, civilian, and strategic. While militarily Israel has made impressive progress in countering the main threats emanating from Gaza, the civilian dimension has continued to deteriorate, and the search for a viable alternative to Hamas has remained stagnated. Consequently, growing economic and social frustration in Gaza increases the likelihood of another conflict flaring up. While Israel will be militarily in a better position to manage such a conflict, in the absence of a workable exit strategy, no long-lasting positive change in Gaza is achievable following another round of hostilities.

Israel’s inability to develop a purposive alternative to Hamas’ control of Gaza, dictates that a limited military option is still the best choice. Specifically, a military rationale based on attrition, denial, and deterrence, should remain the dominant logic for the next round of hostilities rather than a strategic-political one dictating an end to Hamas’ rule.

The strategic, military and civilian standing of Hamas continues to decline. While it can still enforce its control over Gaza, it has become more isolated in the Arab world. It has been reduced to having to rely on Iran for military support, on Qatar and Turkey for civilian aid and on Egypt for access and transit to and from Gaza. This is made more difficult as Egypt is highly suspicious of Hamas, Turkish influence has been tempered, and Qatar is embroiled in its own intra-Gulf struggle. Indeed, the rest of the Sunni Arab world disapproves of Hamas and the support of Iran and Hezbollah for it, putting Hama’s regional standing is at an all-time low. Furthermore, Hamas’ international standing is also taking a beating under the guidance of Jason Greenblatt, President Trump’s special representative for international negotiations.

Poverty and squalor are rampant in Gaza, with the Hamas siphoning off large amounts of civilian aid to fund ineffectual military capabilities that are being successfully counterbalanced by Israel. Hamas’ attempts to manipulate the reconciliation agreement with the Palestinian Authority in order to relieve the economic burden of financing the civilian apparatus in Gaza has also failed so far.

In the meantime, Israel’s anti-infiltration project, both above and below ground is diminishing one of the major military threats planned by Hamas for the next round of hostilities. Innovative anti-tunneling sensor capabilities have matured enough to have uncovered eleven attack tunnels so far. Further improvements in the Iron Dome system have counterbalanced the lethality of mortar and rocket fire on Israel’s home front. A marine barrier is also being built against attempts to infiltrate Israel’s coast and the defenses against Hamas’ drones are being enhanced.

More recently, the “March of Return” campaign by Hamas— which sent thousands of civilians to try and infiltrate the border with Israel—was Hamas’ attempt to stay relevant and ignite the West Bank and East Jerusalem too. Although the campaign garnered short-lived international interest in the plight of Gaza, it has been a failure so far. However, it does highlight the ideological-religious rigidity that plagues Hamas’ foundational view of Israel. Manipulating alleged nonviolent civil disobedience to carry out terror attacks against the border, Hamas reiterated the rejection of Israel’s very existence since the “March of Return” is directed against Israel’s original 1948 lands.

In short, Israel’s ability to counter Hamas’ plans for the next round of hostilities, the organization’s weakened regional and international standing, and a worsening humanitarian crisis in Gaza have left Hamas with only a spoiler card to play. Hamas wants to draw in regional actors into coming to Gaza’s aid out of fear of the consequences of another round of hostilities. However, this is a dangerous policy given the inherent risk that tactical mistakes could quickly lead to a wide-scale escalation due to a lack of robust de-escalation procedures between Israel and Hamas.

While the Palestinian Authority (PA) has been effective in preventing a spillover of violence from the events in Gaza to the West Bank, it refuses to carry the economic burden for Gaza as long as Hamas fails to relinquish its hold over the governmental bureaucracy and its military capabilities. Consequently, the October 2017 reconciliation agreement signed under Egyptian auspices between Hamas and the PA has ground to a halt.

In addition, the conditions for a more assertive PA policy on Gaza and Hamas are presently unfavorable. The PA has suffered a demise and standing under the Trump administration, has seen increased regional apathy towards its undertakings, and is awaiting the expected departure of its leader Abu Mazen.

While the fortunes of the Hamas and the Palestinian Authority are in decline, Israel’s relative strategic standing is on the rise, especially given the support it receives from the Trump administration. Apart from Turkey, Israel’s regional standing does not appear to have been seriously undermined— regardless of the U.S. decision on Jerusalem and the violence surrounding the “March of Return” demonstrations in Gaza. Meanwhile, in Syria Israel has successfully used air-strikes on Iranian forces and diplomacy with Russia to maintain its red-lines on Iran’s presence and the supply of sophisticated weapons to Hezbollah.

Furthermore, Israel has done nothing since the previous round of hostilities to develop an alternative to Hamas as the rulers of Gaza. Added to this is a mistrust of the Palestinian Authority coupled with wariness over any international involvement in Gaza which further results in passivity towards this issue.

Thus, while Israel’s response to the military threats emanating from Gaza is becoming more effective militarily, its humanitarian policy is not robust enough to prevent another round of hostilities and its strategic planning to bring about a fundamental political change in Gaza following such hostilities remains stalled.

Another round of hostilities in Gaza may very well be a question of when and not if. Hamas’ foundational opposition to Israel’s very existence combined with deteriorating humanitarian conditions with little in the way of relief on the horizon, is edging the situation closer to a wider outbreak of violence.

Given that Israel and the international community have failed so far to develop an alternative to Hamas’ rule over Gaza as an end-state to another war, destroying Hamas’ control would lead to either an open-ended Israeli presence that governs Gaza or to chaos. The fact still remains that neither of these alternatives serves Israel’s strategic interests better than a deterred Hamas controlling Gaza.

While there is no clear way out of this predicament, improving the humanitarian situation and investing in Gaza’s crumbling infrastructure may help to put off the outbreak of a new round of hostilities and raise the stakes of hostilities for Gaza.

In the absence of a predetermined alternative to Hamas’ control of Gaza, Israel’s military strategy in a new round of hostilities should, for the still valid reasons outlined in my previous article, rely mainly on a strategy of offset attrition and refrain from a large-scale ground incursion that would play into Hamas’ hands.

Shimon Arad is a retired Colonel of the Israeli Defense Forces. His writings focus on regional security matters.

Image: An Israeli mobile artillery unit travels after a live-fire display during a conference held by the Israeli Defence Force (IDF) on the use of fire support from both the ground and the air in a complex combat environment, at the Shivta Field Artillery School in southern Israel May 24, 2012. REUTERS/Baz Ratner (ISRAEL - Tags: MILITAR​