Why Israel's Settlement Construction Must Be Stopped 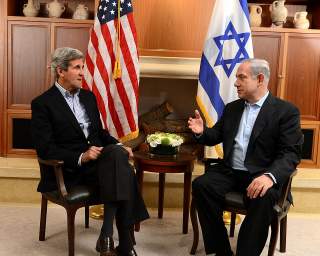 At the end of its tenure, the Obama administration is trying to leave a framework for Israeli-Palestinian peacemaking in place by abstaining on United Nations Security Council Resolution 2334 and laying out its view of how the conflict might be resolved with Secretary of State John Kerry’s recent speech. It’s not clear such a framework will survive a Trump administration. But despite the heavy criticism directed at both events, they were in fact necessary and appropriate, and the effort had to be made. They also demonstrate the difficulties in balancing several interests at the same time; indeed, while the Kerry speech represented a clear-headed and honest assessment of the conflict and the path forward, the Security Council resolution was much more problematic.

President Barack Obama made the right call abstaining on the vote on United Nations Security Council Resolution 2334 on Israeli settlements. On the one hand, the resolution reflects longstanding American opposition to Israeli settlements in the West Bank that has been echoed by every American president since the 1970s. On the other hand, it contains some provisions contrary to American policy, which is why the United States did not vote yes.

Like all his predecessors, Obama has understood settlements to be not the cause of the Israeli-Palestinian conflict but a major obstacle. They swallow up more land and, the more plugged into the Israeli economy and infrastructure they become, the more difficult they are to physically remove. They also become accepted by Jewish-Israeli society as part of Israel and raise the domestic political cost of removing them.

This is particularly problematic with regards to sites outside the main settlement blocs that leave less land available for a viable Palestinian state and undermine the entire peace process. Netanyahu himself has bragged about how positive these developments are.

The wrenching political struggle in Israel in recent months over Amona – an illegal outpost of forty families deep in the West Bank – is instructive. If the removal of this small outpost causes so much controversy, how will Israeli society come to terms with the relocation of hundreds that would likely be part of a two-state agreement?

Netanyahu’s successive governments have worked to entrench settlements at a rate greater than previous governments, especially in places east of the security barrier. The population in this area has grown by twenty thousand since 2009 and ninety thousand settlers now live on land generally considered to go to a Palestinian state once a final peace treaty is negotiated.

The Netanyahu governments have facilitated the construction of more illegal outposts and worked to make them legal. Since 2011, one third of the over hundred unauthorized outposts, which are illegal under Israeli law, have been legalized or are in the process of being legalized. And legislation in the Knesset would legalize many more.

The resolution isn’t perfect. The fact that it comes from a UN body makes it difficult to accept without concern. As U.S. permanent representative to the UN Samantha Power noted in her statement on the resolution, the UN has a terrible history of singling out Israel and ignoring far worse human rights abuses.

That the resolution focuses so relentlessly on Israel’s responsibilities also makes it problematic. Several other factors have undermined the peace process, including Hamas’s intransigence and use of violence, the Palestinian Authority’s own balking at key moments and lack of recognition by the Arab states and regional conflicts. But two wrongs don’t make a right. None of these wrongs obviate the imperative to stop settlement construction.

It’s also a problem that the resolution does not distinguish between territory that will certainly be part of Israel such as Jewish neighborhoods in east Jerusalem, and construction deep in the West Bank. Still, the resolution makes explicit the need for negotiations to determine final borders. It references the 1967 lines as the basis for a final resolution, but all changes are subject to “those agreed by the parties through negotiations.” All discussions since the 2000 Camp David talks have focused on land swaps. This resolution keeps that in place.

Finally, some argue the resolution supports the Boycott, Divestment, and Sanctions movement, which seeks to wrongly sanction Israel. But all the resolution does is call on states to “distinguish, in their relevant dealings” between Israel and the occupied territories – a far cry from attacking tech companies in Tel Aviv.

The resolution certainly could have been less critical of Israel, more critical of the Palestinians and more nuanced on the challenges they face together. But Washington did not craft the statement, and it would be hypocritical of the Obama administration to veto a resolution that reflects many of its concerns on the problem of the settlements.

This is why John Kerry’s speech on December 28 was so important. A Security Council resolution cannot account for all the nuances of the conflict, nor lay out specific guidelines. As a statement of American policy, the Kerry speech was able to do both. Even as it built directly on the resolution, the speech laid out a more balanced approach to the conflict. And though it came at the very end of the Obama administration, there was still value in having the secretary of state who presided over what was only the third round of direct final status negotiations undertaken during the history of the conflict, lay out what he learned from his experiences.

Kerry repeated Obama’s position that two states, Israel and Palestine, was “the only way to ensure Israel’s future as a Jewish and democratic state, living in peace and security with its neighbors.” Much of the rest of the speech underlined the role of the settlement enterprise in blocking that critically important outcome. Given the expansion of settlements as described above, Kerry was certainly right to emphasize that a peace deal would entail “uncomfortable truths and difficult choices.”

Kerry also emphasized Palestinian responsibility for the conflict and its continuation. He was clear that terrorism and violence by Palestinians, including “glorification” of those who murdered Jews, hinder progress. He also focused on incitement, efforts to delegitimize Israel’s right to exist and Fatah’s autocracy and Hamas’ violent intransigence.

But most important, Kerry laid out six principles for ending the conflict; call them the “Kerry parameters,” which focus on the core final status issues: (1) territory; (2) mutual recognition (specifically Israel as a Jewish State); (3) Palestinian refugees; (4) Jerusalem; (5) security; and (6) end of claims. The positions in the speech build on previous rounds of negotiations and all fall within reasonable limits of previous talks with two significant updates, both of which lean towards the Israeli position.

First, Kerry referenced UN General Assembly Resolution 181 (the Partition Plan), which in 1947 laid the legal groundwork for both a Jewish and a Palestinian state. Indeed, the Zionists celebrated the resolution as the heralding of a return of Jewish sovereignty. The Zionist leadership accepted the resolution.

But Kerry was explicit that using 181 as the basis for talks was meant to incorporate Palestinian recognition of Israel as the Jewish homeland. This represents a significant victory for Israelis, who, in recent years have come to see this as a critical symbolic issue that reaffirms Palestinian acceptance of Israel’s right to exist.

The other major update was with regards to security. Kerry laid out explicitly that any agreement must ensure security for Israel, including a de-militarized Palestinian state. While this issue was also addressed by previous parameters, what was important was the amount of effort that Kerry together with retired Marine General John Allen put into addressing this question throughout the 2013-14 negotiations and the level of detail and support implicit in this statement.

This update was important because since the second intifada and the Hamas takeover of Gaza in the aftermath of the Israeli withdrawal, security has become a much more central issue for Israelis. Indeed as Kerry outlined, their fear that the West Bank could become a failed state and leave Israel strategically vulnerable is a much bigger obstacle to peace than it was fifteen years ago.

Contrary to claims that President Obama has, in his final days in office, engaged in an unprecedented betrayal, the United States has voted for or abstained on Security Council resolutions critical of Israel under every administration since 1967. The 2016 abstention represented a reasonable approach to one obstacle to peace while the Obama administration’s other policies over the past eight years – captured and updated in the Kerry speech – reflect a deep commitment to Israel’s security and reaffirmed Israel’s and Palestine’s right to exist together side-by-side in peace and security.

Ilan Goldenberg is the Director of the Middle East Security Program at the Center for a New American Security and previously was part of Secretary Kerry’s Israeli-Palestinian negotiating team. He tweets at @ilangoldenberg. Brent E. Sasley is Associate Professor of Political Science at the University of Texas at Arlington. He tweets at @besasley.