Why Italy Belongs in the Transatlantic ‘Quad’ 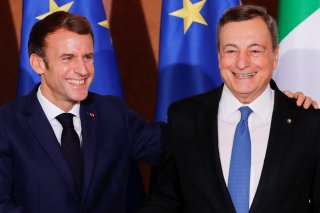 On the margins of the NATO Defense Ministerial, the Defense Ministries of the United States, the United Kingdom, France, and Germany met for an informal meeting of the so-called “Transatlantic Quad.” This format is becoming more and more used, as last month Secretary of State Antony Blinken also spoke with his British, German, and French counterparts to coordinate on Ukraine.

This format recalls other Quads, primarily the Quadrilateral Security Dialogue that the United States has created in the Indo Pacific with India, Japan, and Australia to counter China, but also another one that some want to promote in the Middle East between the United States, India, the UAE, and Israel, although the genesis of this informal security group seems to be more complicated.

These smaller groups to coordinate efforts between allies are welcome, particularly in such a hectic time in which finding quick ways to coordinate and respond is essential. At the same time, this push toward “minilateralism” risks being ineffective and missing its goals if these smaller groups are not well-thought-out. This is likely the case of the “Transatlantic Quad.” More than a quad, this group should be a “Pentagonal Security Dialogue” (a PENT) and necessarily include Italy.

Why does this dialogue need to include Italy? For three main reasons: Rome’s changing approach to military responsibilities and defense issues; its strategic role in the Mediterranean; and its middle position on European strategic autonomy and the transatlantic partnership.

Concerning the first, Italy has implemented several changes over the past few years, particularly concerning its approach to military and security issues. Rome has become a more proactive actor. Despite the pandemic and its adverse economic effects, it has substantially increased its military expenditure over the past three years. Moreover, Rome is taking over a number of greater security responsibilities in Europe, the Middle East, and beyond. For instance, Rome is one of the major contributors to NATO’s Air Policing mission across Europe, is now in charge of the NATO Iraq mission, and last but not least is particularly active in the Sahel when other European countries are either leaving or reducing their presence. Against this backdrop, Italy is also able to play a significant diplomatic role with Sahelian countries, as shown by the successful diplomatic process held in Rome between the Malian government and several Tuareg rebel groups.

These dynamics are also linked to the second point raised above. The traditional transatlantic security discourse identifies an eastern flank and a southern flank. The former usually has a sort of primacy over the latter. However, this static division makes little sense these days. NATO and its member states must stop looking at dynamics in the broader neighborhood through the dichotomic lens of east vs. south. These two theatres are actually connected, as shown by the Russian moves of the past few years. Moscow intervened successfully in Syria in 2015, one year after it had invaded Crimea and there had been the breakout of war in Ukraine.

After this, Russia has increased its direct and indirect presence in several other countries, from Libya to Mali, exploiting the vacuums left by the United States and Europe. Russia obviously sees its Mediterranean and African engagement as a part of a broader, and above all, coherent strategy in which there is a linkage between the Mediterranean, Africa, and its near abroad. Every gain in these two contexts serves the purpose of reducing NATO options in Russia’s immediate near-abroad.

Moreover, Italy is home to the American Six Fleet, the NATO Southern Hub, and bases such as Aviano and Sigonella that are incredibly relevant to the alliance. As such, limiting Russia in these contexts is also necessary for the broader scope of the alliance. A Transatlantic Security Dialogue that omits a prominent Mediterranean member would inevitably be less fit for the purpose.

Last but not least, Italy is the actor that can mediate between European, American, and British ideas on European Strategic Autonomy. Particularly since Lorenzo Guerini became minister of defense, Italy has been a staunch promoter of a “Transatlantically Sustainable” version of strategic autonomy. In this context, the EU common defense project and NATO should reinforce one another and not be seen in competition. A corollary to this is that defense industries on both sides of the Atlantic, including the United Kingdom, should work closer, pursuing greater interoperability. To do so effectively, Italy envisages the necessity for Europe to take more responsibilities on security issues, particularly in its neighborhood, and this is precisely what Italy has been doing in recent years with the already mentioned actions in Iraq and the Sahel.

In Europe, instead, the views on this issue are very diversified, and the distance existing between France and Germany is telling from this point of view. French president Emmanuel Macron openly said that NATO is “brain-dead” and thinks Europe should gradually become less dependent on this transatlantic alliance. Despite its economic centrality and transatlantic loyalty, Germany is highly reluctant to engage militarily abroad and, above all, invest more in security and defense, thus undermining Europe’s ambitions to become more independent in tackling crises in its neighborhood.

Against this backdrop, instead, the United States and the UK continue to believe that NATO is the keystone of European security architecture. For British prime minister Boris Johnson, this quad is part of a broader approach to give Britain a more significant role in European and transatlantic affairs after Brexit and promote the idea that getting out of the EU did not imply a downscaling of London’s global ambitions. For Johnson, on the contrary, it would give the UK more freedom of maneuver to act on the international stage.

Against this backdrop of very diverse views and perceptions on the role of the transatlantic alliance in the European security architecture, Italy has the ideal middle position between Anglo-Saxon and European perspectives, and its presence in this security dialogue can further help bridge these differences. Italy is already playing this role in broader contexts, such as the EU and NATO.

Transatlantic coordination, so far, has worked well in keeping Western countries united in dealing with Russia’s actions in Ukraine. In the past weeks, Italy has stepped up its game after the initial passivity due primarily to domestic issues (the uncertainty linked to the election of the President of the Republic) and some domestic concerns regarding the impact of sanctions, as voiced by Prime Minister Draghi. However, despite these concerns, Italy is acting consistently with the goals and the ideas of its transatlantic allies. Thus, transforming the “Transatlantic Quad” into a “Transatlantic Pent,” including Italy, would provide the alliance with a more functional and comprehensive yet still agile forum to better coordinate responses against the challenges that the transatlantic alliance is facing these days.

Dario Cristiani is a Senior Resident Fellow at the German Marshall Fund of the United States and a Senior Fellow at Istituto Affari Internazionali. The opinions expressed in this article are the author’s alone.