Why It’s So Hard to Leave Afghanistan 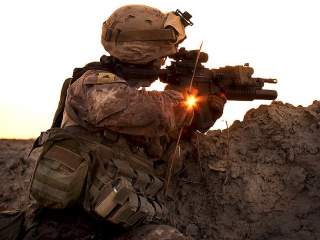 The U.S. strategy in Afghanistan is a complete failure. So why are we still there? Last fall President Obama announced that he would keep 5,500 U.S. troops in Afghanistan into 2017, exceeding the original deadline for withdrawal. The reason for the decision, on the surface, appears to be Obama’s desire to keep up pressure on the Taliban to end their insurgency and accept a political settlement. But when considered in the light of fourteen years of intense military efforts, the loss of thousands of American lives, trillions of dollars spent and public support for withdrawal, this explanation falls flat. The real answer stems from three fundamental errors of judgment by President Obama.

Let us first dismiss the idea that the U.S. has stayed in Afghanistan for reasons of national security. For Obama and others who advocate staying, the endgame revolves around the argument that keeping a lid on Afghanistan is necessary to prevent future attacks. As Obama’s former special representative to Afghanistan, Daniel Feldman, recently argued, “Our presence right now helps serve as a significant bulwark against instability.”

Sadly, this argument is a straw man. If the United States had wanted to create new extremist groups, encourage the use of terrorism and destabilize the Middle East, it could hardly have done better than invading Afghanistan (not to mention Iraq), removing the Taliban government and unleashing civil conflict on a massive scale, then leaving thousands of American troops to ensure that the United States got caught in the middle of the violence. Since 2001, the number of Islamic extremist groups has skyrocketed by 185 percent. The number of terrorist attacks worldwide mushroomed from 1,878 in 2001 to 11,952 in 2013. The notion that a longer stay in Afghanistan will reduce the terrorist threat is a fantasy.

By keeping the United States in Afghanistan, Obama has fallen prey to what psychologists call the “zero-risk bias.” This term describes people’s tendency to try to reduce a small risk to zero rather than try to make more significant reductions in larger risks. Despite 9/11 and a handful of other successful (but much smaller) attacks, the overall threat of terrorism against the United States is very low and most of it has nothing to do with Afghanistan. Spending more money trying to reduce an already small risk of Afghanistan-related terrorism just doesn’t make sense compared to spending that money dealing with bigger problems. Even worse, Obama’s plan to eliminate the small risk of Taliban-inspired terrorism ensures that the U.S. will run larger and more certain risks by keeping American troops in Afghanistan where they are at risk on a daily basis.

Beyond this, it is also clear that Obama is caught in the sunk cost trap, unable to recognize that it is time to cut U.S. losses. Like most people faced with having made massive expenditures without achieving their goals, Obama feels pressure to redeem all the lives and money wasted over the past fourteen years. But as hard as it may be emotionally, the decision to stay in Afghanistan should not be based on how hard we have worked up until now. The decision must hinge on whether or not the benefits of staying outweigh the costs moving forward. And since there is little to be gained, staying in Afghanistan will simply be an exercise in throwing good money after bad.

Finally, Obama’s decision to stay in Afghanistan reflects a serious miscalculation about the ability of the United States to influence events and the behavior of less powerful actors. Given how often the U.S. exhibits this delusion, we should probably call this the “superpower bias.” Here, too, history reveals the harsh truth. Why, after fourteen years during which the United States has enjoyed almost complete military domination of Afghanistan, do policy makers imagine they will be able to influence events now, especially at troop levels far lower than at the height of the surge? Even in 2010, with 100,000 troops in the country, the U.S. was never able to ensure desirable political outcomes in Afghanistan; nor were its military gains more than temporary. And as time has passed, U.S. influence has only diminished.

Can these errors of judgment be corrected? In theory, yes. Through careful reassessment of the situation and an awareness of the human tendency to fall prey to such biases, political leaders can challenge their own assumptions and arrive at better decisions. At a societal level, vigorous public debate can provide a critical check on poor decisions and risky policies. Unfortunately, today’s foreign policy debates have become one-sided affairs. Since 9/11, calling for a reassessment of our policies on terrorism and intervention has become a risky business. Sadly, given this state of affairs, the United States’ stay in Afghanistan may have no end in sight.