Why James Comey's Testimony Will Be Must-See TV 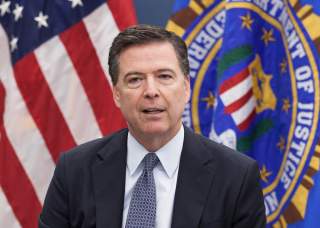 James Comey’s firing is the scandal with the most potential to damage Donald Trump. Not accusations of Russian collusion, which are hopelessly overblown and keep returning innuendoes but no concrete evidence. Not the Twitter tantrums against various world figures like London mayor Sadiq Khan—those are unseemly, but within the presidential prerogative. Only Comey’s unceremonious pink slip, distributed while the FBI was in the midst of an investigation into the Trump presidential campaign, can set tolling the words “obstruction of justice” and raise the Nixonian question of whether the cover-up is worse than the alleged crime.

The Comey fracas will come to a televisual head on Thursday, when the former FBI director sits down with the Senate Intelligence Committee for a round of public testimony. Ideally, the hearing will be a workmanlike pursuit of the truth; realistically it will be a partisan Mad Max rumble, with Dianne Feinstein on flamethrowing electric guitar. ABC and CBS have already announced they’ll cut into their daytime programming to carry the Comey testimony live, which is all the indication you need of the thunderdome to come. Expect pyrotechnics from the senators; do not expect to have your faith in the United States Congress restored.

The reason is that most of the legislators will be under intense party pressure: Republicans to run cover for the president, and Democrats to flay him alive. The first half of the hearing, open to the public, will be when lawmakers preen for the cameras, while more serious business will likely be conducted in the second half, which will be behind closed doors so that classified information can be sorted out. Republicans are betting that the nearly universal criticism leveled at Comey over his investigation into Hillary Clinton’s emails will be enough to impeach his credibility. Democrats will capitalize on an opportunity to further discredit the president.

Two big questions will form the basis for the partisan brickbats. The first is how Trump made the decision to fire Comey. Initial reports insisted the president had innocently followed the advice of Deputy Attorney General Rod Rosenstein, who wrote a generic memo listing Comey’s various professional sins—but Rosenstein has since noted that he didn’t actually recommend that Comey be let go, and anyway he knew the FBI chief would be canned no matter what he put to paper. Trump later confirmed this by telling NBC’s Lester Holt that he intended to sack Comey irrespective of Rosenstein, trampling all over his own explanation. Comey is unlikely to be a wellspring of information about the machinations behind his own firing, but senators will litigate it nonetheless.

The second and more relevant question is whether Trump pressured Comey to drop the FBI’s investigation into former national security advisor Michael Flynn. As with the rest of the Trump bonfire, the kindling here has been anonymous sources, who allegedly read to the New York Times notes that Comey had allegedly made after Trump allegedly told Comey he hoped Flynn would be let off easy. It will be the task of the committee to dispel the weaselly A-words from that preceding sentence. If Comey confirms that Trump made those remarks—that he interpreted them as pressure to drop the investigation—and if he can satisfactorily explain away previous testimony in which he said no such pressure had been applied, it will unleash a political poltergeist against the White House.

It will also pit the former FBI director’s word against the president’s, and how fitting. As I’ve written before, it’s difficult to imagine two figures less alike than Trump and Comey: the former a glowworm even in ostentatious Manhattan whom voters sent to the White House to be bad, the latter a law-enforcement lifer with a hallowed view of civil service who seems almost naively resolved to remain good. Both are tarnished in the eyes of official Washington: Comey for his spasmodic hopscotches across the presidential minefield, Trump for just about everything he’s ever done. But presented with this clash of the titans, the elites will side wholeheartedly with Comey, happy to see him make recompense for his treatment of Hillary Clinton and pleased to have found a way to endanger Trump without ever having to confront the forces behind his election.

Comey won’t destroy his nemesis on Thursday. With special counsel Robert Mueller leading a separate investigation, there will be plenty of questions he simply won’t be able to answer. And given his prior mistakes in the congressional hot seat and the inevitable public scrutiny he’ll face, his every word will be carefully weighed. But he will be the most high-profile witness against the White House yet, one who knows a good deal more than the president wishes he did. And Trump wanted him outside the administration rather than in? The president’s conduct has yet to be indicted, but his judgment surely has been.

Image: FBI Director James Comey during a press briefing regarding the shooting at a nightclub in Orlando. Wikimedia Commons/Public domain