Why Japan's Outreach to China Will Fail 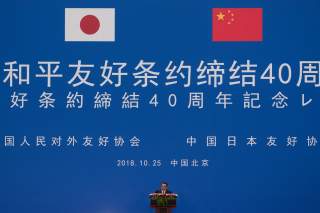 Japanese Prime Minister Shinzo Abe just did a disservice to Japan, its alliance with the United States, and the man he calls his friend, President Donald Trump. At a time when Washington and its allies are increasingly standing up to China, Abe went to Beijing to make nice with China’s leaders.

Abe began his multi-day visit amid promises to expand Japan-China ties ranging from business to sports. Appallingly, Abe expressed a desire to participate in “infrastructure projects” related to China’s Belt and Road Initiative, Beijing’s flagship means of spreading economic influence and corruption around the globe. The Japanese leader even proposed “shifting from competition to collaboration” with the world’s largest kleptocracy.

Just as questionable as the act was its timing. Earlier this month, Vice President Mike Pence gave a watershed speech that reflected a fundamental change in U.S. policy toward China. He noted, “America had hoped that economic liberalization would bring China into a greater partnership with us and with the world. Instead, China has chosen economic aggression, which has, in turn, emboldened its growing military.” Furthermore, Pence declared that “More business leaders are thinking beyond the next quarter, and thinking twice before diving into the Chinese market if it means turning over their intellectual property or abetting Beijing’s oppression.”

It was not an exaggeration that some commentators likened Pence’s remarks to Winston Churchill’s Iron Curtain speech in 1946, which recognized that freedom’s chief opponent at the time, the Soviet Union, had begun the Cold War.

Getting to the point where Pence could make such a concise testament wasn’t just a herculean effort within a government bureaucracy disinclined to speak plainly about China. It was the culmination of the years-long work of unnamed thousands who have toiled to illustrate the folly of appeasing Beijing, as America’s foreign policy and business establishments have done firmly for decades.

Amid this fundamental shift—made possible only by the presidency of Donald Trump—Abe chose to travel to China and seek business deals. Moreover, Abe did so less than a month after a Chinese naval vessel nearly collided intentionally with a U.S. Navy ship in the South China Sea. In fact, American and allied navies have been taking many risks to assert freedom of navigation in the Pacific and to protect the very sea lanes for trade on which Japan depends.

Abe’s outreach also came in the middle of a U.S.-China trade war and as Beijing has sought to undermine North Korea’s will to disarm on reasonable terms. Also, Tokyo’s decision was made during the long-delayed commencement of trade talks with the United States. While negotiations were supposedly proceeding at high levels of both governments since early in the Trump administration, only recently did Abe agree to proceed in earnest. A senior administration official recently described the change to me as evolving the process “from bullshit to not bullshit.” But any serious entente between Tokyo and Beijing could only erect obstacles to a deal with Washington.

Washington is aware of the danger of allies making deals with Beijing. One of the innovations of the new U.S.-Mexico-Canada Agreement is that it prohibits side agreements with non-market economies such as China. Since the United States is sticking its neck out to confront China for its theft of intellectual property and other unfair trade practices—something that will benefit the whole world if it succeeds—the Trump administration understandably does not want its major trading partners to provide Beijing with relief.

If a deepening Japan-China relationship stalls U.S. trade talks, it will likely mean Japan will find itself subject to the same higher tariffs that others who refuse trade reform have faced—especially higher duties on their goods. Trump is likely to enact tariffs on automobiles and car parts, which would impact Japan significantly. Furthermore, if talks falter, Abe—who sought economic reforms that never quite materialized—could lose the last political lever with which to force domestic structural reforms before his premiership ends.

America never expects total agreement from its allies and seeks partnership, not servility. No one doubts that U.S. allies will put their countries first in making decisions on trade and security matters. But Washington does expect fairness and no longer will look the other way at those who take advantage of Americans. This is particularly true of countries that underfund their defense and expect the United States to fill a security gap, which is the case with a Japan that spends only about 1 percent of its GDP on defense.

There is still tremendous goodwill in U.S. security circles for Japan, and Abe enjoys perhaps the best relationship of any foreign leader with Trump. Part of that is based on assumptions that Tokyo and Washington will collaborate closely on North Korea, economic issues, and especially China. If these assumptions turn out no longer to be true—if Japan comes to be seen in a similar light to Germany and France, which contribute little to the common defense and strive to preserve unfair trade practices—then both Japan and America will be worse off, and the only real winner will be China.

Let’s hope Tokyo’s outreach to Beijing ends up being kabuki theater, not a real shift.