Why Jerry Hendrix Should be the Next Navy Undersecretary 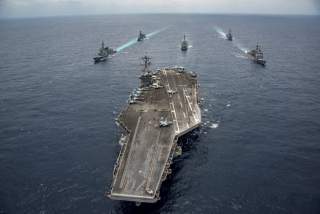 The Senate Armed Services Subcommittee on Seapower has been a bright spot in this Congress as it pushes the Pentagon to rebuild America’s Navy. At a hearing this week, the committee called retired Navy Captain Jerry Hendrix to testify about how to reach President Trump’s goal of a 350-ship fleet. Hendrix did not disappoint. He should now be considered the frontrunner for one of the key remaining Pentagon appointments—undersecretary of the Navy.

The Navy’s new secretary, Richard Spencer, likewise had a strong performance at his confirmation hearing earlier this month. A U.S. Marine and successful businessman, Spencer demonstrated a commitment to the president’s promise of a 350-ship fleet. His answers to committee questions exhibited a willingness to explore innovative approaches to achieve the president’s goal. Spencer also acknowledged the serious shortfalls in naval aviation readiness and the lasting negative impact that the Obama administration’s sequestration caps have had on the Navy. Overcoming the effects of sequestration while adding eighty ships to the fleet will be one of the biggest challenges in government. Spencer needs an undersecretary like Hendrix in facing this daunting task.

As Spencer acknowledged—and Hendrix has advocated—restoring readiness and rebuilding the fleet requires outside-the-box thinking, not the stale status quo approach that has hindered the Pentagon’s progress over the past two decades. For example, simply taking “warm” ship production lines and going “hot” with them so that they can produce more of the same classes of ships will not get the Navy to 350 ships, nor will it meet the nation’s strategic needs. New ideas on fleet architecture and innovative approaches to expanding the nation’s industrial base so that it can produce new ship designs must be part of the new secretary’s plan. This is where Hendrix comes in.

Hendrix, now the lead defense analyst at a major Washington, DC think tank, has been contributing to the national dialogue on naval force structure for nearly ten years. He was a force-structure strategist in the Office of the Under Secretary of Defense for Policy. He later worked for the Pentagon’s legendary Office of Net Assessment and was the director of the Navy’s History and Heritage Command. He has written about the fleet architecture for scholarly, defense and political journals. His essays have, in large part, established the agenda for the country’s current national debate over how to rightsize the fleet by emphasizing the need to grow the Navy by investing in a “hi-lo” mix of ships and aircraft that would balance capabilities and capacities.

Hendrix has not been afraid to take on controversial topics when advocating for the Navy. When analysis suggested that the composition of the current carrier air wing would require the Navy’s Nimitz and Ford-class carriers to sail deep into anti-access, area denial (A2/AD) zones in order to strike targets, Hendrix called for an immediate investment in both manned and unmanned long-range strike platforms. While criticizing the makeup of the current carrier air wing was unpopular in certain naval and defense contractor circles, it was the right thing to do for the safety of the Navy’s sailors and for U.S. taxpayers, who have made enormous investments in the carrier fleet. Hendrix detailed the precise types of aircraft the Navy should invest in to confront the A2/AD environments that now exist in the Western Pacific, Baltic and Black Seas and Persian Gulf, which included unmanned mission tankers and an air wing balanced between high-end stealth aircraft and low-end legacy aircraft.

In April, Hendrix and I wrote a piece for Politico Magazine  that laid out a plan to get the Navy to 350 ships in eight years and within a reasonable budget. Achieving this goal could be accomplished through a combination of service-life extensions of existing ships, selective recommissioning of ships in the ready reserve “ghost fleet,” and by expanding the production of fast-attack submarines, an additional carrier, and a mixture of frigates and other small combatants. Our plan is not a theoretical “castle in the air.” It is a shipbuilding program that can actually be accomplished while President Trump is in office. Hendrix’s twenty-six years of operational experience in the Navy and detailed understanding of the Pentagon budget gleaned from his current role as a leading defense analyst was crucial to developing the program.

Hendrix’s skill was on display before the Senate Armed Services Subcommittee on Seapower during the July 25 hearing. His knowledge was encyclopedic and his answers to numerous questions regarding shipbuilding from various senators was detailed and lucid. No person in attendance or watching on C-SPAN could have come away with anything less than respect for his mastery of the complex issues facing the Navy.

As General Mattis and Secretary Spencer—two great U.S. Marines—ready themselves for the challenge of implementing President Trump’s impressive shipbuilding plan, they would be well-served to have a distinguished sailor such as Hendrix as the Navy’s undersecretary. His experience in the Navy, his post-service advocacy for the fleet President Trump wants to build, and his willingness to shake up the status quo for the benefit of America’s sailors and taxpayers makes him the right man for the job.

Robert C. O’Brien is a partner at Larson O’Brien LLP. He served as a U.S. representative to the United Nations General Assembly. O’Brien was also a senior National Security Advisor to Gov. Scott Walker, Gov. Mitt Romney and Sen. Ted Cruz during their presidential campaigns. His book: While America Slept: Restoring American Leadership to a World in Crisis was released in September. He can be followed on Twitter: @robertcobrien.