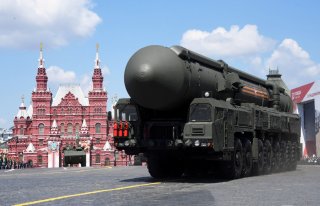 Joe Biden’s first meeting as president with Vladimir Putin lies just around the corner. While not surrounded with the drama of United States-Russian symmetry during the Cold War era, the timing of the Biden-Putin encounter on June 16 appears especially fortuitous for both as Washington and Moscow stand on the brink of a new and unnecessary nuclear arms race. President Biden, it seems, recognizes this reality. In deciding in February to extend the 2010 New START Treaty—the last nuclear accord reached between Washington and Moscow—President Biden underlined the importance of seeking new strategic negotiations with Russia and China as well.

To reduce the risks of a nuclear conflict neither the United States, Russia, nor China want and which none can possibly win, President Biden will need to be bold. The main risk of a nuclear war today is not from some “bolt from the blue” decision by President Putin or Xi Jinping. Any such act would be nuclear suicide. The real danger is that a small, even unintended clash between our forces could quickly escalate to a nuclear exchange. All three governments should seek to expand the use of proven crisis management and communication tools to reduce these risks, but they alone are not enough. To address growing instabilities in the tripolar nuclear world, Washington must take a more expansive approach to negotiating with Moscow and Beijing.

It would be easier for Biden and Putin to negotiate a new, incremental deal on strategic nuclear forces, building on previous agreements. But small steps will not be enough to reverse the destabilizing trends that have unfolded over the past quarter-century. The development of advanced technology in information warfare, missile delivery systems, strategic defenses, and counter space capabilities must all be addressed if the danger of nuclear escalation is to be contained. All these capabilities, not just the number of nuclear weapons in our arsenals, determine whether deterrence will be credible and thus stable, and whether conflicts can be kept small and managed. In the end, all the capabilities that can undermine strategic stability, not just strategic offensive deployed nuclear weapons, need to be part of the discussions with Moscow and Beijing.

While the future of China’s nuclear and other capabilities are legitimate concerns, Russia remains the more urgent nuclear challenge. Despite recent growth in its arsenal, China remains far short of being a nuclear peer of the United States. Moreover, the proven ability of Moscow and Washington to implement agreements means the benefits of success with Moscow in the near term are greater.

To go big, President Biden should seek for the first time to limit all nuclear weapons in both countries, with effective verification. This would include a cap on all weapons regardless of range and whether they are deployed or in storage. Both countries now possess roughly 3,500-4,500 such weapons and could maintain rough parity under such an arrangement, something that would aid both deterrence and reassurance of nervous American allies. Such a comprehensive deal would for the first time limit Russia’s larger stockpile of non-strategic nuclear weapons, building on the reported but unfulfilled agreement by Presidents Putin and Donald Trump to freeze all nuclear weapons at 2020 levels. While this tentative deal has since been walked back by Russian negotiators, it appears possible that a serious U.S. offer might unlock this long-sought goal.

A total weapon constraint would constitute a major step forward in nuclear transparency and predictability. While it would require both the United States and Russia to accept more intrusive verification measures than past agreements, the technology to achieve these goals is now decades old. Political will, not technical breakthroughs, is the limiting factor in verifying such a deal. Investing the resources in verifying such limits are investments well worth making, totaling pennies on the dollar compared with nuclear modernization programs already in budget plans.

Perhaps the most challenging related issue is Moscow’s new intermediate-range, ground-based missiles, including the 9M729 missile that Moscow deployed in violation of the now-defunct 1987 Intermediate-Range Nuclear Forces (INF) Treaty. Shorter-range, nuclear-armed missiles presented a danger to stability in the Cold War and the same is true today. With short flight times, these systems force leaders to make snap nuclear decisions that could cost millions of lives when time to gather information and make decisions can prevent disaster. The best outcome would be a renewed ban on all INF weapons, nuclear-armed and conventional, but Moscow’s violations of past deals may make that impossible. Instead, the United States and Russia (and possibly China) should consider a ban on nuclear-armed INF missiles alone, a step that can be verified. America has no plans to develop nuclear-armed INF systems. Russia’s stocks of nuclear 9M729s are thought to be quite small. China has a large arsenal of INF range missiles, but few are deployed with nuclear weapons. While Russia’s offer to not deploy INF missiles in and around Europe is worth pursuing, accepting such a plan could put U.S. allies in Asia at greater risk, just as similar proposals in the 1980s would have done. If an outright ban on nuclear INF missiles is not possible, strict numerical limits and ensuring any such systems are not co-located with conventional missiles would be preferable and more predictable than one where all such systems are unconstrained.

These deals are viable, but only if the United States, Russia, and China are prepared to discuss the development of other capabilities including missile defenses. Despite developing new weapons designed to circumvent U.S. defenses, Moscow and Beijing remain worried that U.S. missile defenses (regional and national) may undermine their ability second-strike deterrent capabilities. The requirement to defend the United States from threats emanating for smaller nuclear powers, such as North Korea, is to some extent driving the offensive buildup of Russia and China. Likewise, Moscow and Beijing are getting better at regional and even strategic defenses. One possible way to control this instability would be to increase the transparency that all three states apply to their growing missile defense capabilities. Annual declarations about the number of tests conducted and sharing ten-year program plans on a rolling basis would at least provide some way to anticipate where such programs are headed.

None of these approaches will be easy, but the time to fix these problems with smaller steps has passed. Determining whether trade-offs in some areas of military capability are worth both the stability they may create, the costs savings they may produce, and the benefits to alliance management that come with effectively negotiated agreements is a complicated task that mixes military and strategic considerations and, of course, domestic politics. Getting America’s national security agencies and officials to think more broadly about security and risks will be only one of the challenges in pursuing such a deal. Even if a sound deal can be negotiated, gaining Senate approval for anything in a period of hyper-partisanship is no certain feat. None of these realities, however, should deter President Biden’s team from making the effort. Not only is it the smart thing to do, but the very act of trying will help reassure nervous allies, strengthen America’s ability to address global nuclear nonproliferation, and demonstrate that the United States can still do big things.

Richard Burt was the lead negotiator of the Strategic Arms Reduction Treaty (START) and former Ambassador to Germany. Jon Wolfsthal is the former Senior Director for Arms Control at the National Security Council and helped support negotiation and approval of the New START agreement. They are respectively the President and Senior Advisor at Global Zero, a movement dedicated to reducing nuclear risks and to complete nuclear elimination.