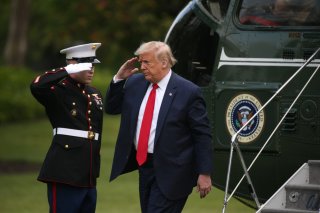 Former Vice-President Joe Biden handily leads President Donald Trump in most polls. Swing states appear to be moving against him. Seniors are drifting away. The coronavirus continues to rage. So why are so many Democrats so concerned about Biden’s prospect this fall?

One reason is that worrying about Trump’s electoral prowess is a way of avoiding becoming overconfident ala 2016, when Hillary Clinton’s edge over Trump was supposed to be insurmountable. Democrats continue to suffer from a kind of election night PTSD as they contemplate that the inconceivable occurred. Clinton, the standard-bearer of the party, was ousted by a former Manhattan real estate mogul and playboy who stole the lunch money of the Democrats by appealing to working-class voters—the forgotten man that he appealed to in his inaugural address as the assembled Washington elite gaped in amazement at the sight of Trump taking the oath of office.

It could happen again. For all his miscues and foibles and temper tantrums, Trump has displayed a remarkable consistency during his presidency. Throughout, he has maintained an unbreakable rhetorical umbilical cord to his supporters. Whether he guides them or they guide him is an open question. But his ability to adhere to his base remains intact. There are two pertinent examples. The first is the Michael Flynn case. The second is the coronavirus pandemic.

When Flynn was originally compelled to resign after the shortest tenure in history as national security adviser, Trump essentially turned his back on him. But since then, he has turned Flynn into a cause célèbre to galvanize his conservative base and to target Barack Obama. Trump likely made a mistake in not simply pardoning Flynn rather than relying on the Justice Department to clear him. Now Flynn is engulfed in a legal morass as the Justice Department’s moves are coming under increased scrutiny from Judge Emmett Sullivan. Trump has indicated that he may yet pardon Flynn, but the blowback would be even greater now that the Justice Department has become further enmeshed in the case. On the other hand, Trump may relish the opportunity to make a bold statement that appeals to his base. More than ever he will be defying the regnant DC elites and burnishing his own bona fides as an outsider—even though he has been president for almost four years.

Trump has made it clear that he is intent on continuing to up the ante when it comes to trying to turn the tables on his detractors. Thus, on Monday at the White House, Trump accused Obama of having perpetrated a crime against him and labeled it “Obamagate.” But he refused to say what it was exactly. It was so clear that specifying it would be an exercise in redundancy. According to Trump, “The crime is obvious to everybody.” As Susan Glasser pointed out in the New Yorker, attacking Obama has become Trump’s go-to move whenever he finds himself in a political predicament: “since the beginning of his anti-Obama rant on Mother’s Day morning, Trump has tweeted and retweeted attacks on the former President thirty-three times, by my count, with around a dozen of those referring to the vague but nefarious `OBAMAGATE.’ On Wednesday, Trump forwarded to his Twitter followers a video, from 2016, of Obama suggesting that Trump could never become President. `Obama was always wrong!’ he tweeted.” The obvious implication is that anyone who served as Obama’s vice-president is by definition tarnished as well. In attacking Biden as a cunning criminal, part of a conspiracy to get Flynn, however, Trump does run into a logical inconsistency: either he can portray Biden as a doddering old man, as he has done in the past, or as a nefarious rogue. But it can’t really be both.

Just as he’s trying to turn the Flynn case to his benefit, so Trump is attempting to profit politically from the coronavirus. In pitting the economy against health, Trump is taking a dangerous gamble. He’s been gambling from the outset, reckoning that the coronavirus would never amount to much. Instead, it’s set to claim the lives of at least 100,000 Americans. At the same time, the economy remains largely shuttered. Trump’s new gamble is that he can turn the economic gloom against the Democrats by posing as the liberator of the states mostly run by Democratic governors, including Pennsylvania and Michigan. In an astute analysis, Stephen Collinson observes, “Trump's calculation to reject science and push to swiftly crank up an economy with the nation still ravaged by Covid-19 could kill many more than the 85,000 Americans who have already died.

That seems a price Trump is willing to pay as he appeals directly to the many millions of Americans who are also victims of the pandemic, but who have paid with their jobs, not their lives. That's a message that could resonate.

In states where the virus has not caused massive death tolls, it can seem remote. But economic blight is everywhere and may brew a political storm that could punish Democrats if Trump can paint them as stubborn enemies of a return to work or responsible for furloughs turning into long-term job losses.”

Trump remains the unpredictable force that he has been since he began running for the presidency. Trump’s presidency could be destroyed by the pandemic if it continues to rage and the economy remains stagnant or worse. But Trump has shown that he is the ultimate political survivor. Biden should beware.