Why John Kerry Is Drawing the Wrong Lessons from Shakespeare 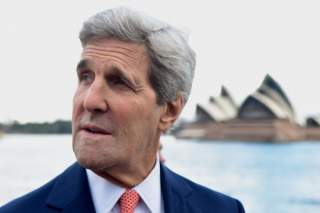 As U.S. Secretary of State John Kerry nears what may be his retirement from public office he has taken up an interesting pastime: literary criticism. In a new 1,600-word essay for the British Council, Kerry turns his statesman’s eye on his favorite of William Shakespeare’s plays, As You Like It. The secretary of state praises it as one of the most idealistic and uplifting of Shakespeare’s works for the stage. It’s an odd choice. Why not Richard III or Henry V? Coriolanus or Macbeth? Almost any of Shakespeare’s other works would seem to offer more immediate insight into statecraft and power politics than this pastoral comedy. Nonetheless, there is much is to be commended in the essay. For example, Kerry is surely correct in seeing Rosalind as a kind of a diplomat in negotiating sides and bringing about the play’s resolution.

And yet, something is rotten in the secretary of state’s analysis. His conspectus misses an essential point in As You Like It—arguably the main point of the play—and it is a worrying omission not just for literary criticism but for U.S. foreign policy as well. That’s because Kerry’s mistake in his reading of Shakespeare, the glaring blind spot, is the same mistaken impulse that has sideswiped the current administration and its predecessors when dealing with the world—that is, the impulse to let idealism run roughshod over reality.

The Play’s the Thing:

In As You Like It, the usurping Duke Frederick banishes from the court his niece Rosalind, who is joined by the Duke’s own daughter Celia in fleeing to the idyllic Forest of Arden. There, Rosalind’s father Duke Senior passes the time in exile. Once in Arden, Rosalind, in the guise of a young boy, finds and flirts with the self-exiled Orlando, who doesn’t realize that the boy is in fact his beloved Rosalind. Meanwhile, Duke Senior and his coterie interact with the locals and muse on the mysteries of nature and time. In the end, disguises are shed, couples are joined and Duke Senior is miraculously restored to power. The exiles ready themselves to leave Arden and return to court.

The setting here is essential. Arden is a set piece of the pastoral literary mode in which the rural is idealized as a refuge from urban court intrigue with all its mucky decadence and duplicities. Instead, far from the cares of the world, shepherds are seen in soft sepia tones, idling away in a timeless landscape, composing poetry. “There’s no clock in the forest,” Orlando says midway through As You Like It. Such is the nature of a pastoral.

But even having repaired to the country, pastoral is really about how the urbanites see the rural setting rather than how, for example, a local might. As Marjorie Garber explains in her 2004 book Shakespeare After All, pastoral is “a city art rather than a rural one; shepherds do not write idyllic accounts of the perfect simple lives of shepherds.” Arden—and this is something the former senator from Massachusetts should be familiar with—operates as a kind of Martha's Vineyard for the urban elite, who in seeing only what makes it different from home see none of what makes it distinct. Simply put, Duke Senior and his followers are foreigners in Arden, and it shows. Early in Act II, Duke Senior bursts onto the stage effusive about where he finds himself:

“Now, my co-mates and brothers in exile,

Hath not old custom made this life more sweet

Than that of painted pomp? Are not these woods

More free from peril than the envious court?

And this our life, exempt from public haunt,

Finds tongues in trees, books in the running brooks,

Sermons in stones, and good in everything.

I would not change it.”

Of course, this is nonsense. It’s a willful distortion by the one doing the seeing. “There are sermons in the stones and books in the brooks,” Garber writes,

“but only because Duke Senior puts them there. . . . Duke Senior sees the landscape as moral exemplum, and it becomes one. The forest itself is a blank canvas, on which he is projecting his own interpretation. And what he sees is that the country is more honest, less duplicitous than the court.”

That final sting—“I would not change it”—is so sharp precisely because Duke Senior is changing what he sees. Here and throughout As You Like It the rose-colored glasses through which the exiles view Arden render the forest unrecognizable as a real place. “Arden,” Garber notes, “is a projection of one’s own beliefs, dreams, or fears—a psychological mirror of the self.”

Shakespeare, being Shakespeare, understood this and brilliantly plays with the generic expectations of the pastoral mode. As Garber writes, “Shakespeare is a master at bringing literary conventions to life on stage, thereby both illustrating them and exposing their pretensions and shortcomings.” As such, As You Like It is filled with reminders that a grimy reality to Arden exists beneath the understanding of its courtly visitors. The canvas upon which Duke Senior’s imagination colors is not entirely blank.

Immediately following Duke Senior’s praise for all things arboreal, he is told of how his melancholy attendant Jaques sees the scene. The exiles are not the romantic poet-shepherds of pastoral convention. Instead, Jaques says, they are “mere usurpers” and “tyrants” who frighten and kill the local deer in “their assigned and native dwelling place.” Jaques is unique among the exiles for seeing things as they are to the forest’s natives. Later, too, when an actual shepherd of Arden appears he talks about his hands having been made dirty and hardened and tar covered from tending to his birthing ewes and from rural labor. These are not, Shakespeare emphasizes, the soft hands of a poet. And when this shepherd first meets Rosalind and Celia he initially rebukes their pleas for help, upending the supposed eager hospitality of simple country folk. Reality, even in Arden, is grimy and unexpected after all.

Kerry notes none of this in his essay, focusing only on the exiles’ optimism. He even quotes the first words from Duke Senior praising the forest, but takes them at face value, seeing in them simply an early argument for environmental conservation. In fact, Arden is the hinge of the play, and Kerry seems to have missed it. That’s a problem. At minimum, it was a wasted opportunity to point out that when a stranger steps into a strange land, he sometimes sees what he wants to see rather than what is actually there. That is surely a thought which a seasoned, globe-trotting, negotiation-hardened diplomat could smartly expound upon. More worrying, however, is if this essay reveals a real blind spot, a cataract in analysis that blurs over into other areas of judgement. Does he really not see that the gushing idealism from the foreigners is in conflict with the reality experienced by Arden’s natives?

All the World’s a Stage:

What does this have to do with U.S. foreign policy? A lot. In recent years American presidents and their advisers have too often treated the world as a kind of Arden—not, of course, in finding it to be a edenic retreat. Rather, presidents and their coterie have too often projected their own beliefs, dreams or fears onto the world to such an extent that it has overwritten how the realities on the ground have been understood. Simplicity has been found where there was in fact complexity. Openings were found where there were instead obstructions. And, if not outright good, then certainly possibility was found in everything. The result? Too often America’s foreign policy leaders have failed to see the trees as trees, the brooks as brooks and the stones as stones.

In Iraq, for example, President George W. Bush and his advisers believed the nation to be a gestating liberal democracy ready to emerge. None existed. More recently, the White House believed the Iraqi and Afghan armies to be up and effective fighting forces, only to see them totter and collapse when challenged. As well, Robert Gates has described how, to his chagrin, rose-colored idealism from young advisers swept through the situation room during the early days of the Arab Spring. Caution that might have been informed by the flesh-and-blood realities of the region, its history or its power politics, was abandoned. And today, in Syria, Secretary Kerry and others seem to see a unified moderate opposition where none exists among the multitudinous combatants.

There’s more. A sharper eye for seeing a “stone as a stone” might have anticipated that following the idealistic U.S.-led nuclear deal Iran’s hard-liners would then be keen to push back for their own gain—which they did by kidnapping U.S. sailors and by deploying the S-300 surface-to-air missile defense system at the Fordow enrichment facility. Or, such a critical view might have anticipated that an idealistic reset with Moscow was also at the mercy of how Russia sees the world, and not simply now available because the U.S. administration wanted it to be so. Or, it might have anticipated that following the idealistic U.S.-led opening to Cuba that nation’s tin-pot dictator would take advantage of the televised press conference to brazenly raise his own global standing (and, in a humiliation, the limp wrist of the U.S. president). “All the world’s a stage,” Jaques says. Indeed.