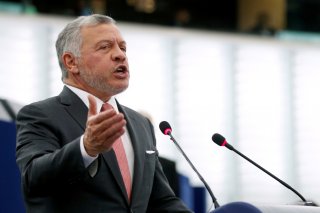 On Saturday, Jordanian authorities arrested nearly twenty people and placed the kingdom’s former crown prince under house arrest. As first reported by the Washington Post, Jordanian officials moved swiftly to quash a “well-organized” and “far-reaching” alleged coup attempt against King Abdullah II, who has ruled Jordan since 1999 and is a close U.S. and Israeli ally. In a noteworthy statement, Petra, the official Jordanian news agency, further said that the purported plot is known to have unspecified “foreign” backing. The apparent coup attempt comes at a moment when the Hashemite kingdom confronts a welter of problems, at home and abroad.

Although security officials have stressed that Prince Hamzah bin Hussein, the kingdom’s former crown prince and the eldest son of the late King Hussein, had not been arrested, he has reportedly been “asked to cease all movements or activities that could be employed to target Jordan’s security and stability.” In a video provided to the BBC, Prince Hamzah stated that the chief of the general staff of the Jordanian Armed Forces had informed him that he was not allowed to leave his home, communicate with others, or access social media because of his connections to “meetings” and “criticisms” against the country’s political leadership. The prince, whose phone lines have been cut, denied any wrongdoing and further stated that some of his friends, whom the Guardian revealed as Sharif Hassan bin Zaid (a member of the Jordanian royal family and a former envoy to Saudi Arabia) and Bassem Ibrahim Awadallah (a former head of the royal court who is said to be close to King Abdullah), had been arrested.

Despite that investigations are ongoing and additional arrests are expected, governments near and far wasted no time in expressing support for Jordan’s government and King Abdullah II. Not long after reports surfaced, Ned Price, spokesman for the U.S. State Department in Washington, stated that “We are closely following the reports and in touch with Jordanian officials. King Abdullah is a key partner of the United States, and he has our full support.” Responses from regional Arab states followed suit. According to Reuters, Saudi Arabia, Egypt, Bahrain, Lebanon, Kuwait, Iraq, Qatar, Yemen, Palestine, and the Gulf Cooperation Council and Arab League all issued statements in support of Jordanian sovereignty, security, and stability. Officials in Israel have not commented on the alleged coup plot as of the time of writing but were reportedly briefed by the Jordanians on the security situation.

Stability in Jordan is certainly of interest to the wider Middle East and the international community at large. Jordan, which has maintained a peace treaty with Israel since 1994 and is considered a crucial U.S. regional ally, has weathered a series of dire challenges in recent years, including the hosting of millions of refugees and new stresses brought on by the Covid-19 pandemic. A small country of just over ten million people, Jordan is currently home to over 1.3 million Syrian refugees and the world’s second-largest refugee camp, where conditions are poor and underfunded, and people lack access to healthcare and employment opportunities. This responsibility has strained Jordan’s finances, overburdened its schools, and taxed its infrastructure, Jordan’s Ministry of Planning and International Cooperation told the Associated Press in 2019.

The coronavirus pandemic, too, has heightened tensions in the kingdom. Although Jordan was previously regarded as an international success story following its quick decisions to close its borders and enact restrictive lockdowns, the country experienced a sharp increase in cases last fall, before seeing another wave of cases spike in March. Now counting over 622,000 cases of Covid-19 and more than 7,000 related deaths, the kingdom is hoping that vaccines can be its way out of a prolonged crisis that is overwhelming hospital wards and cemeteries alike.

Protests against the government over seemingly endless lockdowns, perceived political corruption, and economic problems have also become more commonplace. For instance, Amman’s efforts to secure International Monetary Fund loans by implementing austerity reforms have provoked sustained public opposition and assertions that the government is selling out its politics to foreign donors. Moreover, following widespread demonstrations in response to the government’s repression of a teacher’s strike and anti-lockdown protests, the deaths of nine coronavirus patients who ran out of oxygen in a government hospital have resulted in increased demands for the government’s resignation.

These internal problems also follow a slew of external political challenges for the kingdom. It is well known that Amman was not a fan of former President Donald Trump’s Middle East peace plans; King Abdullah warned Trump against moving the U.S. embassy in Israel to Jerusalem and rejected Trump’s Middle East “peace to prosperity” plan while having to contend with the protests that the U.S. president regularly instigated. The adoption of the Abraham Accords between Israel, the United Arab Emirates, and Bahrain further shifted the ground beneath the kingdom’s feet. Until recently, Jordan had been one of only two Arab countries that maintained close relations with Israel. The accords, and speculation that Saudi Arabia may be next to normalize relations with Israel, have changed this dynamic; Amman may not be considered the vital interlocutor it once was—especially now that Arab capitals are moving closer to Israel despite a lack of Israeli-Palestinian peace. If this trend continues, Jordan will have to make tough decisions about its place in this emerging regional order, regarding both the Palestinian refugees that live within its borders and the funding from Gulf capitals on which its survival continues to depend.