Why Khamenei Always Fights His Presidents 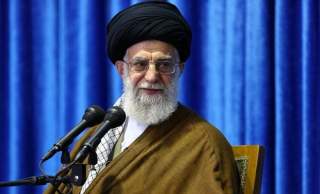 In a bad sign for liberalization in Iran, Supreme Leader Ayatollah Ali Khamenei continues to openly oppose President Hassan Rouhani’s leadership on foreign, economic and sociocultural policies. Khamenei’s endeavors to thwart the president publicly are part of a pattern of obstruction—one that makes reform impossible until either a more moderate ayatollah replaces Khamenei, or the political structure and constitution in Iran are modified.

Conflict intensified between the two leaders on January 20, 2016, just days after the January 16 implementation of the nuclear deal. The Guardian Council, under the influence of the supreme leader, disqualified thousands of reform-minded candidates from running for parliament in the February elections. The next day, Rouhani promptly criticized the disqualification of candidates, which was justified based on “their alleged non-adherence to Islam.” He argued that the Guardian Council’s disqualification of candidates ran contrary to the spirit of Ali, the first imam regarded by Shia Muslims as the prophet Muhammad’s successor, who considered practical merits when choosing governors—not just candidates’ religiosity.

Additionally, Khamenei has challenged Rouhani’s economic policies. For example, in March, during his annual Nowruz message, he designated the coming year as the year of the “Resistance Economy: Action and Implementation.” He implicitly has challenged Rouhani’s open door economic policies, which hinge in large part on increased foreign investment in the wake of sanctions relief from the nuclear deal. Khamenei’s Resistance Economy calls for a resurrection of widespread domestic production and a sharp decrease in exports. This domestic focus contradicts Rouhani’s diagnosis that Iran’s economic problems stem from its disconnect from the global economy. Khamenei’s push reflects his impatience at Rouhani’s failure to adopt the “Resistance Economy” approach, despite the supreme leader’s call for such a policy two years ago.

More recently, Khamenei and Rouhani have butted heads over foreign-language education. In May, the supreme leader voiced concerns about teaching English to children and adolescents, due to concerns that the “international hegemonic system” had designs to transform Iranian culture into one that is neither Islamic nor indigenous. Rouhani has challenged the Supreme Leader, saying that Iran must embrace foreign language education in order to open the “window of science, knowledge and understanding” for young Iranians, create jobs and strengthen Iran’s economic relations.

Unfortunately, these conflicts between Supreme Leader Khamenei and the president are not a new phenomenon. Khamenei has had at least sporadically tumultuous relationships with all of the presidents who have served during his tenure as supreme leader. Each conflict can be directly traced to his efforts to preserve his power and status quo.

More understandable, however, is the conflict that existed between Khamenei and reformist president Khatami. Two years after the election of Mohammad Khatami, the struggle between both leaders increased. Khamenei, for example, actively worked to derail Khatami’s foreign agenda. In 2002, after the Khatami administration signaled that it would be open to talks with the United States. Relations had been rocky since the 1979 Islamic Revolution and hostage crisis, but the supreme leader criticized these efforts to repair them and blocked Khatami’s talks. Earlier, in 2000, Khamenei had prevented reformists, led by Khatami, from investigating any institution controlled by the supreme leader.

The pattern of conflict dates all the way back to Khamenei’s ally and first president, Akbar Hashemi Rafsanjani, who helped Khamenei’s selection as supreme leader in the first place. After four years of consolidating control, the Ayatollah asserted his supreme power in 1993, forcing Rafsanjani to sack his minister of culture and Islamic guidance (who happened to be future president Khatami). Khamenei also forced him to sack his minister of higher education, who he believed was not Islamic enough, because he wanted to pursue a stronger agenda for the Islamization of universities. He also subtly criticized Rafsanjani for his economic policies, which he claimed led to increased economic inequality and to a rising middle class with a “luxurious” lifestyle.

That these conflicts existed during each presidential administration, regardless of a particular president’s ideological bent, demonstrates that Khamenei’s antagonism towards his presidents revolves around his desire to further consolidate power around the supreme leader. Furthermore, Khamenei’s 2011 push to transition from a presidential system to a parliamentary one demonstrates his ambition to decrease the power of the elected portion of the regime by cutting off its decision-making head. Ayatollah Khamenei’s willingness to publicly challenge his presidents makes clear that liberalizing reforms will not come to fruition in Iran until either after his death, when he will hopefully be replaced with a more moderate Ayatollah as supreme leader, or after the constitution and political regime change—which seems practically impossible.

Saeid Golkar is a visiting fellow for Iran policy at the Chicago Council on Global Affairs and a lecturer for the Middle East and North African Studies Program at Northwestern University, and a consulting senior fellow at the International Institute for Strategic Studies.